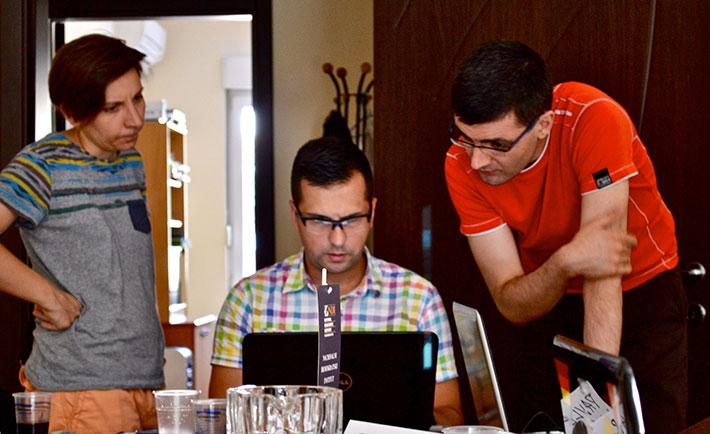 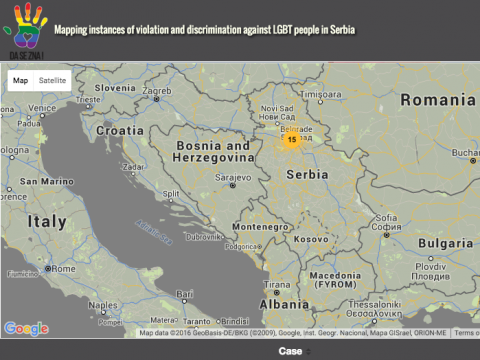 A screen capture of the Da Se Zna! platform, which is used to collect and map incidents of violence and discrimination against LGBTI persons in Serbia.

At a local Belgrade bar in September 2015, a group of assailants attacked a young LGBTI activist named Dragoslava Barzut while she was spending the evening with friends. No one stood up to protect Barzut and her friends that night. She continued to receive threats following the attack.

Despite the attack and threats, asylum abroad was not an option for Barzut. She will not leave her country as long as she can be an agent for change even though she feels wary while on public transportation and nervous during her daily commute to work. “I'm not staying here because Serbia is an ideal place for someone like me to live,” she said, “but I deeply believe that if I don’t leave, one day it may be. My fight is here.”

Barzut’s story reflects the experiences of many LGBTI people in Serbia and the greater Balkan region. According to a 2014 LGBTI issues poll conducted by NDI in Serbia, 60 percent of LGBTI respondents said they had experienced harassment due to their sexual orientation or gender identity, with 25 percent of respondents reporting being victims of physical assault.

I first traveled to Belgrade in August 2015 as part of NDI’s Ideas Grant initiative, which challenges junior staff around the world to establish new and innovative approaches to democracy development. In Belgrade, I met with Barzut and NDI’s Mahsuma Petrovic, who, alongside local activist organizations, have been developing tools and strategies to reduce violence and discrimination against LBGTI persons in Serbia. NDI trained LGBTI organizations to communicate strategically about the creation of Da Se Zna! (translated as To Be Known!), an online platform for reporting and mapping incidents of violence and discrimination against LGBTI persons, developed with expert technical assistance from Benetech. NDI and LGBTI groups communicate this data to the public in an attempt to reduce violence against their community. The data also serves as supporting evidence that advocacy groups can use to influence local and national institutions in Serbia.

Through NDI’s Ideas Grant, Barzut and LGBTI activists are empowered to raise awareness about the plight of violence and discrimination against Serbia’s LGBTI community. Barzut’s experiences and work with NDI on the Da Se Zna! portal motivated her to start a civic organization by the same name. The Da Se Zna! group now runs the online portal, and has established itself as Serbia’s first LGBTI organization dedicated to victim support and protection. Its online platform monitors and maps incidents of violence and discrimination, an important tool that supports and protects victims as well as the broader LGBTI community.

In a step to combat discrimination and increase political inclusion of the LGBTI community, the Human Rights Campaign (HRC) and NDI announced the launch of a strategic partnership in October 2015 to support LGBTI civil society partners. The partnership will enable people like Barzut to grow grassroots organizations like Da Se Zna!, advocate for their rights, change hearts and minds, and inspire social change, acknowledging the equal dignity and rights of LGBTI people around the world. NDI’s global approach to civic participation, includes fostering substantive, sustained interactions between citizens and public officials, as democracy is more likely to develop and endure when all segments of a society are free to participate and influence political outcomes without suffering discrimination or reprisal.

An HRC youth ambassador reflected on the difference between being an openly gay women in the U.S. compared with LGBTI persons around the world: “My biggest human right is to be able to walk out my door and be proud of who I am, but I think that for other people in other countries it’s really just to be able to walk out the door.”

Similarly, LGBTI activists in Serbia, including Barzut, developed a year-long action plan leveraging the skills and tools they acquired working with NDI. One of Da Se Zna!’s first goals is to establish a liaison with the Belgrade police to increase their sensitivity around cases involving LGBTI persons. LGBTI activists are working to one day make it safe for their community to walk out the door and feel proud about who they are without fearing violence and discrimination.

Alexander Pommer
Alexander Pommer is a Program Officer with NDI’s Central and Eastern Europe team where he oversees parliamentary support and political party programs in Central Europe and the Western Balkans.
Connect with the author
LinkedIn
NDI