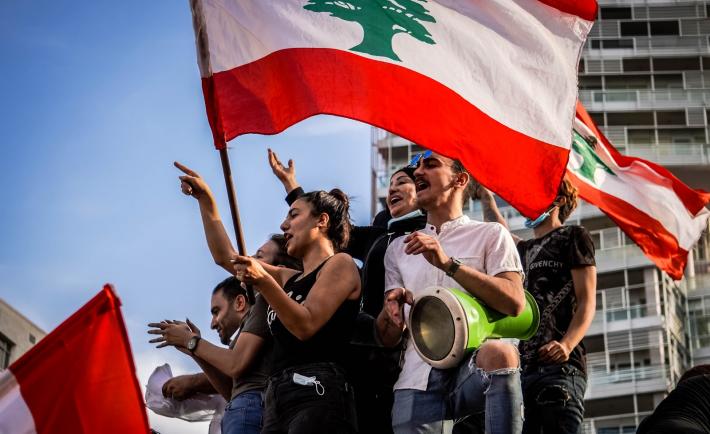 Among the democratic uprisings in Lebanon since October 17, young women and men have stood out as the most energetic protesters against a political system many view as rigged against their generation. Young Lebanese have emerged as organizers within the organic and intentionally leaderless movement, driving actions like road closures, displays of solidarity, and vigorous policy debates on social media and in the streets. Students have led strikes and invited professors to host civic education lectures in public spaces. With youth unemployment estimated around 30 percent, and with a brain drain of graduates emigrating to find work, students fear their degrees will not pay off unless there are major changes to their government and economy. This political awakening creates an opportunity for Lebanon’s parliament to evolve with the times and harness the energy of young people to help make democracy deliver for all Lebanese.

Young Lebanese have proven that they have the energy, education, and skill to help fix the problems plaguing their country, but most have become disillusioned because they feel they have no real voice in government. Just prior to Lebanon’s 2018 elections, the Inter-Parliamentary Union reported that of 128 members of parliament (MPs), only 12 (9.4 percent) were under the age of 45, ranking it 142nd in terms of the age of its MPs out of the 145 countries assessed. After the elections, this proportion increased to 15 out of 128 Lebanese MPs (11.7 percent). Yet three of the new MPs under the age of 40 were the sons of party leaders and heirs of their families' sectarian patronage structures.

Since its founding, the makeup of Lebanon’s parliament has been determined by sectarian quotas that were intended to ensure a balance among diverse religious groups, but these quotas have, in practice, paralyzed the Lebanese state by entrenching parties built to serve disparate communities instead of the common good. The Taif Agreement, made to end Lebanon’s Civil War 30 years ago, allowed sectarian militias to transform into today’s political parties, but the agreement also asserted that abolishing political sectarianism is a fundamental national objective. Now, protesters are displaying unprecedented unity across Lebanon’s diverse communities and saying that the time has come for a new parliament without seats reserved based on sect.

This national awakening happened rapidly as Lebanese of all sects and from all corners of the country, especially youth and women, realized that their struggles and aspirations have more in common with each other than with wealthy elites in power. As a Lebanese national identity has sprung forth to eclipse political and sectarian allegiances, young people – unburdened by memories of war – are more willing and able to work across traditional divisions in pursuit of a shared future. But parties and parliament would first need to lower or remove barriers that exclude young Lebanese from formal decision-making processes.

Lebanon has one of the highest voting ages in the world, at age 21. A recent study by NDI and partner organizations found that 90 percent of countries have a voting age of 18, with 27 countries allowing some citizens under 18 to vote. Lowering the voting age has been shown to boost voter turnout not only because of increased youth participation, but because instilling the habit at a younger age, especially in conjunction with civic education, leads to higher turnout later in life. Similarly, Lebanon’s minimum age of candidate eligibility for parliament is 25, while the global average is less than 22. Lowering these age requirements would give youth more chances to fight for their future through the democratic process rather than by subverting institutions they see as unresponsive.

Beyond simply being allowed to participate in elections or run for office, young leaders need a level playing field so that their voices aren’t drowned out by well-established and well-funded political machines. One option that could numerically increase representation as part of a more holistic strategy would be for Lebanon to enact a youth quota for parliamentary elections, as Tunisia and Morocco did in response to the Arab uprisings of 2011. In Tunisia, at least one of the first four candidates on every party list must be under 35. In Morocco, 30 of 395 seats are reserved for candidates under 40. At least 21 countries currently have youth quotas as a way to give new leaders a chance to prove themselves.

Lebanon’s parties have struggled to engage youth, and voter apathy among young people caused most to sit out the 2018 election because they weren’t inspired enough to vote for establishment candidates and didn’t perceive viable alternatives. But with Lebanon’s median age around 30 years, the untapped potential of the awakened youth movement could provide massive rewards, enabling new parties to form or old parties to reform to better represent the changing electorate. Beyond paying lip service to youth or holding a few up as tokens, this means recognizing the contributions of young women and men who are participating informally and working with them to address legitimate grievances.

Amidst an economic crisis and social unrest, the Lebanese government is struggling to restore confidence and legitimacy in the eyes of its people. By moving beyond sectarian power-sharing to create more space for groups with cross-cutting identities such as youth and women, the Lebanese parliament could be more representative of—and more responsive to—Lebanese society as a whole.

Kyle Herman
Kyle Herman is a Program Officer at the National Democratic Institute, where he works on projects in Lebanon and Iraq. Kyle has previous experience in local and national government and spent two...