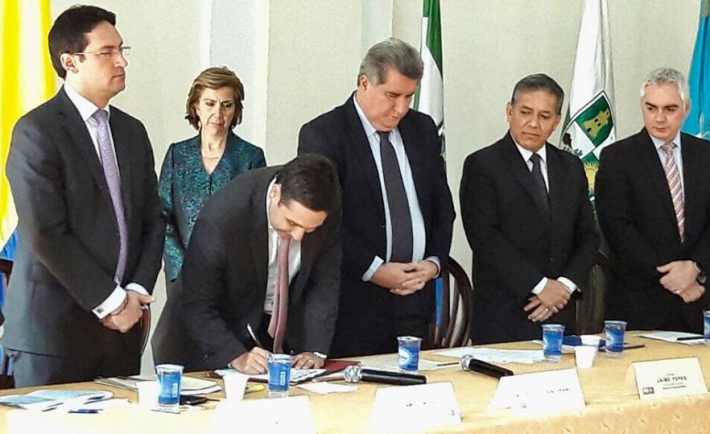 The president of the senate signs the first action plan for a transparent congress Credit: Press Office of the Honorable Senate of the Republic of Colombia, Bogotá, Colombia. November 2016.

On November 30 in Constitution Hall of the Honorable Congress of the Republic of Colombia, an important event took place for the country’s democracy, particularly its legislative institutions. Leaders from the Senate and Chamber of Representatives came together to publicly present the first Open Parliament Action Plan of the Colombian Congress, which lays a series of benchmarks toward making the congress more visible and accessible to citizens.

Colombia’s Open Parliament Action Plan is notable regionally and internationally – it is the third such plan developed in Latin America and the sixth in the world.

This demonstration of political will by the Congress to make the institution more open, modern and transparent through the Action Plan is part of a process that began last year. In November 2015, the Senate and Chamber of Representatives signed a Declaration of Commitments for Transparency. One of the agreed upon provisions within the Declaration was the development of the Action Plan.

Since November 2015, the Colombian Congress has undertaken important efforts to fulfill its commitment to engaging in a two-way dialogue with citizens from all parts of the country. This effort has not been taken solely by legislators or congressional leaders or staff. As part of making legislative affairs more transparent, a process now formalized in the Action Plan, Congress facilitated a collaborative development process with different members of civil society organizations and the legislature. Together, they helped structure and flesh out the points of the plan, some taken from the OGP, to promote integrity, accountability, citizen political participation and the use of information and communication technologies in government.

The Congress’ work in this area was inspired in part by the Open Government Partnership, an international initiative that brings together public sector institutions and civil society in each of the 70 member countries to develop National Action Plans on open government. As a member country, Colombia’s government has worked with civil society to develop two National Action Plans, which make commitments that relate to the openness of the executive branch. The Congress’ activities were intended to adhere to OGP principles and procedures—namely, collaboration and co-creation with civil society. Along with the Congress of Chile, NDI serves as co-chair of the OGP Legislative Openness Working Group.

This initiative was also presented internationally at the fourth global OGP Summit, which took place between December 7 and 9 in Paris, France. President of the Senate Mauricio Lizcano attended the summit representing the Colombian Congress and spoke on a panel discussion on open parliament organized by NDI and the Congress of Chile. Senator Lizcano presented on Colombia’s progress and the Action Plan alongside Ken Wollack (president of NDI), Mukelani Dimba (executive director of the Open Democracy Assistance Centre in South Africa and civil society co-chair of the OGP Steering Committee), Chilean senator Hernán Larraín (president of the bicameral committee on ethics and transparency of the Chilean Congress), Hon. Kaja Kallas (member of the European Parliament elected by Estonia), and Vuka Crnjanski (director of the Center for Research, Transparency and Accountability in Serbia). These other panel members applauded the work and effort of Colombia’s legislative authorities and encouraged continuing with these efforts and fulfilling these commitments.

In this sense, the Action Plan does not just reflect political will on the part of the legislature to live up to its role as a member of this global alliance for more open parliaments. It is also a demonstration of joint work between legislators, citizens and civic organizations, and international bodies – a product of collaboration between diverse sectors working with a genuine common interest to strengthen participation mechanisms and make Colombian institutions more representative.

Colombia’s Open Parliament Action Plan is notable regionally and internationally – it is the third such plan developed in Latin America and the sixth in the world. The focus now turns to the challenging process of implementing the plan and its individual provisions, which include but are not limited to determining a process for publishing legislative information in open data formats and developing digital tools to facilitate citizens’ knowledge of and participation in policy development and other legislative tasks.

It will be crucial for civil society organizations and interest groups to remain involved to ensure the success of implementing the different strategies and processes outlined in the plan and secure its success over time. It is also important to raise awareness of this initiative so that more citizens are better able to stay informed of legislative affairs and take interest in actions to strengthen Congress and, therefore, congressional oversight and policy development processes. These processes are key to protecting and guaranteeing citizens’ rights.