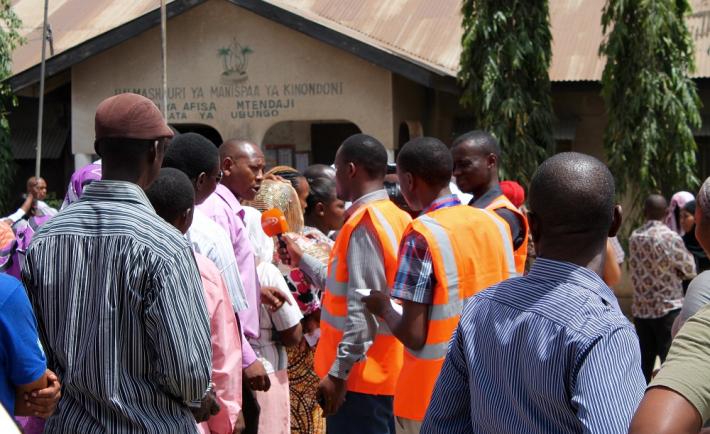 Citizens line up to vote in the 2015 Tanzania elections. Photo credit: Monika Emch/NDI

Each week NDI’s Citizen Participation team provides a resource to assist NDI staff in meeting the objectives of their programs. This past month’s resources analyzed the relationship between minority groups and extreme poverty, ways in which authoritarian governments control the media, steps to increase women’s political participation and real-life lessons on how democracies can take hold. These resources provide tools and insights for civil society and citizens in diverse political contexts.

Leave No One Behind - The Real Bottom Billion, published by ODI, finds that people from minority groups are significantly overrepresented in the billion people who live in extreme poverty, the 800 million people who are malnourished and the billion people over the age of 15 who have either no schooling or an incomplete primary education. With attention directed towards the Sustainable Development Goal Agenda, governments and donors must also focus on tackling challenges unique to marginalized groups. Targeted approaches can help reduce group-based inequalities. External organizations can be more creative in choosing local partners, including groups focused on the economic and social margins of a society.

Stifling the Public Sphere, published by the NED, argues that civil society and independent media can help solve complex societal and economic problems. Civil society serves as an aggregator of citizens’ interests, whereas independent media enables a deeper understanding on issues of public interest. Although there is little space available for media and civil society to operate in the cases examined, the authors highlight several instances where groups exerted bottom-up pressure on state censorship. Donors can use this resource to understand official policies used to limit the potential of the public sphere so that they may better design programs aimed at supporting independent media and civil society in repressive societies.

From Action Research to Advocacy, published by INTRAC, provides a step-by-step guide to achieve greater women’s political participation through action research. Action research refers to a group of research approaches that are participatory, value-driven and action-oriented. The benefits of this approach are manifold: participants develop skills throughout the process and use their research findings to craft an appropriate advocacy strategy that stands rooted in evidence. The action research process requires a reflective emphasis to make adjustments along the way. Overall, the method of moving from action research to advocacy helps stimulate creative reflection for participants to bring about political change.

From Authoritarian Rule toward Democratic Governance, published by International IDEA, contains interviews with political figures who shed light on how democracies can take hold.  Former Spanish Prime Minister Felipe Gonzalez believes the success of democratic transition comes by applying broad principles to concrete circumstances. He argues that the origins of these principles come from anecdotes and experiences. For example, Gonzalez gave a Chilean leader advice about ‘getting out of the well,’ that is, first achieving greater support and leverage before calling for additional demands. Chilean activists used the Spanish experience to deal with the security services during Chile’s transition. Understanding the different ways these past transitions have been handled should provide insights for today’s leaders and activists alike.

Joshua Levkowitz
Joshua is the project assistant for the National Democratic Institute’s citizen participation team.
Connect with the author
LinkedIn