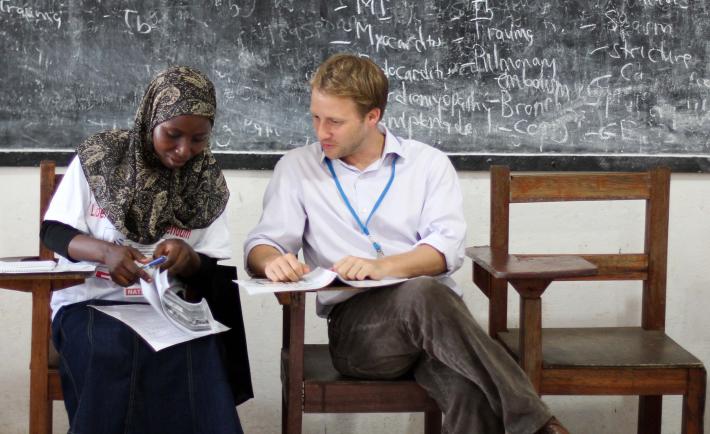 Each week, NDI’s Citizen Participation team provides a resource to assist NDI staff in meeting the objectives of their programs. This past month’s resources discussed how to encourage greater electoral participation in fragile states, young people’s priorities, the relationship between eliminating extreme poverty and citizen participation and alternative approaches to assisting civic movements. These resources highlight the role that citizen participation and inclusive governance play as drivers of social and political development, particularly when it comes to fragile states and vulnerable communities.

Promoting Democracy in Fragile States, published by the World Bank, contributes to development policy discussions by using rural Liberia as a case study for showing the challenges voters face in fragile states. Fragile states are characterized by political fragmentation, voter vulnerability and local patronage systems. Political processes in these states, including elections, reflect an unequal distribution of power and resources. The authors found that civic education and town hall discussions increased enthusiasm for electoral participation and heightened citizens’ willingness to report on voter intimidation. Lessons learned from the effects of the civic education and town hall discussions in Liberia may also benefit citizens in other fragile contexts.

What Youth Want, published by the International Youth Foundation and Center for Strategic and International Studies, collected data from youth consultations and polls to share the top priorities for the world’s youth. Results showed that a major priority for youth is finding employment opportunities. However, they face unemployment rates three to four times higher than adults. Young people (people under 30) desire to earn a living with dignity. Those interviewed recognized that the majority of economic opportunity in the developing world will not come from the current job market; youth therefore want their governments to promote youth entrepreneurship and remove barriers to starting their own businesses. Youth want to be part of the economic solution rather than making up a large portion of the unemployed population, and for their ideas to be considered more than just ‘innovative and fresh,’ but to actually influence decision making.

Vision for Ending Extreme Poverty, published by USAID, presents the agency’s definition of extreme poverty, their theory of change for ending it and where USAID fits in the global effort to achieve the 2030 Agenda for Sustainable Development (SDGs). USAID defines extreme poverty as the inability to meet basic consumption needs on a sustainable basis. The extreme poor can face discrimination, marginalization and are vulnerable to falling further into extreme poverty. The theory of change for ending extreme poverty consists of inclusive economic growth supported by a foundation of effective governance and accountable institutions. USAID seeks to better integrate this overarching goal into its policy, planning and programming.

Aid to Civil Society, published by USIP, raises the question of whether and how civic movements can be best supported by external actors. Citizen movements have confronted government repression, challenged discriminatory provision of basic services and brought global attention to localized struggles. In contrast to traditional NGOs, the entities engaged in civic movements may not be established or registered with the government, making it more difficult for donor agencies to partner with them. Social movements, instead, consist of shifting clusters of networks, communities and individual activists and employ collective methods to open up new democratic spaces. Donors may need to shift in the way they interpret and engage with civil society in order to support civic movements. Instead of typical grant financing, smaller, longer-term and more agile forms of funding can simplify the process and prove helpful to civic mobilizers.

Joshua Levkowitz
Joshua is the project assistant for the National Democratic Institute’s citizen participation team.
Connect with the author
LinkedIn