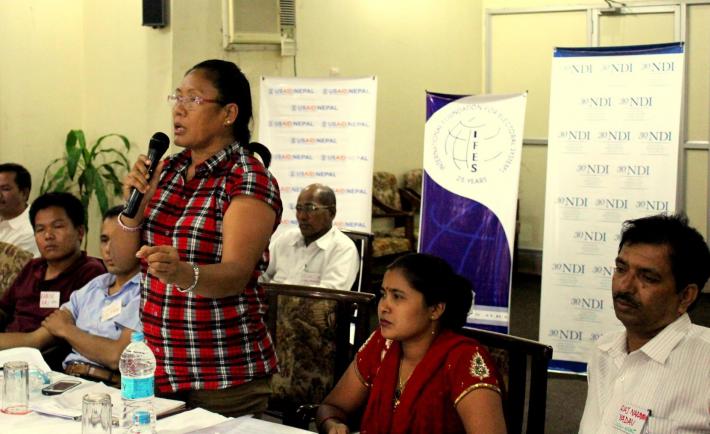 Each week NDI’s Citizen Participation team provides a resource to assist NDI staff in meeting the objectives of their programs. This past month’s resources analyzed how citizens can counter corruption through nonviolent action, how to build a coalition in order to launch a successful campaign, social auditing to increase government accountability, and the debates and challenges of disability inclusion in development.

Freedom From Corruption: A Curriculum for People Power Movements, Campaigns and Civic Initiatives, published by Shaazka Beyerle, is a self-study guide on how strategic nonviolent action can counter corruption and build accountability from the bottom up. The first two modules of the curriculum introduce key concepts for effectively engaging in nonviolent action. The final eight sections highlight the use of people power (objectives, strategy and planning), nonviolent action and potential outcomes. The curriculum is one extended interactive exercise and provides room for constructive input and new ideas.

Sweet Home Chicago: The Story of an Affordable Housing Campaign, published by the Chicago Coalition for the Homeless, chronicles how to build and maintain a successful campaign. In 2008, the Chicago Coalition for the Homeless (CCH) decided to launch a campaign for affordable housing at the city level. Knowing it was impossible to achieve this alone, CCH interviewed and identified potential coalition partners. Out of this, the Sweet Home Chicago Coalition was formed. Despite some challenges along the way, Sweet Home took great strides and achieved measurable results to increase affordable housing for Chicago renters.

A Guide to Conducting Social Audits in South Africa, published by The International Budget Partnership and Social Justice Coalition, guides community activists on how to think about and carry out social audits. Although the guide’s focus is on South Africa, it contains general information that can be used by citizens and communities everywhere to increase government accountability. Throughout the process, communities compare government documents in relation to their own experiences as recipients of a specific service. Experiences and lessons drawn from this process are collected and then shared with government officials. The guide’s authors argue that even a small civil society initiative can spread across a country so that audit programs gain traction and become a regular activity to hold governments accountable.

Disability Inclusion, published by GSDRC, summarizes the key debates and challenges of disability inclusion in development. It also provides benchmarks and indicators for evaluating disability inclusion. People with disabilities are often excluded from playing an active part in the political process, as many face challenges in exercising their right to vote or standing as candidates. There is also considerable evidence that disability and poverty are highly correlated and can reinforce each other, contributing to increased vulnerability and exclusion. People with disabilities also have diverse experiences due to their gender, age, class, nature of their disability, or other factors. For example, women with disabilities often face double marginalization due to intersecting inequalities. Barriers to disability inclusion are numerous and may be attitudinal, environmental, institutional or due to lack of participation.

Mariam Iskajyan
Mariam Iskajyan is a project assistant for the Citizen Participation team at the National Democratic Institute.
Connect with the author
Twitter
LinkedIn
NDI