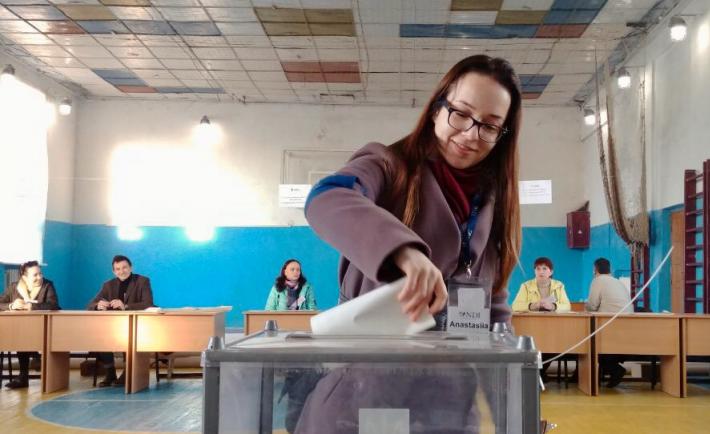 An NDI staff member votes in the March 31, 2019, presidential election, while accompanying international election observers as they observed opening, voting, counting, and tabulation processes in Kyiv and 13 other regions across the country.

Ukraine is all over the news these days, albeit not in a good way. That is unfortunate.

The country deserves much more – and favorable – support for its democratic progress and remarkable resilience in the face of economic hardship and unrelenting Russian aggression. Five years after the Revolution of Dignity ushered in a new democratic moment in 2014, Ukraine’s people in fact are as unified as ever in their aspirations for a more democratic, peaceful and corruption-free society.

NDI has been on the front lines in Ukraine for nearly 30 years with programming to assist them in achieving those goals. The Institute currently maintains an office in Kyiv – one of its largest globally. Having developed deep relationships with a broad array of government representatives, civic actors, and national and local political party leaders from across the political spectrum, NDI programs are as broad-ranging as any we conduct around the world.

The international community, including Americans, should more accurately see Ukraine as a place deserving sustained support for its resilience, and a source of inspiration for other aspiring democracies in Eurasia and beyond. We at NDI will not waver in our longstanding support and investment in Ukraine’s democratic future.

For instance: NDI’s political party work has assisted party members throughout the country to communicate better and be more responsive to citizens’ needs and priorities.

The Institute has worked to establish public consultation mechanisms to close a dangerous communication gap between Ukrainian citizens and their government and reverse growing civic mistrust and alienation.

Together with the European Parliament, NDI has initiated what has become known as the Jean-Monnet Dialogues to help build a culture of consensus and cooperation among factions and groups within Ukraine’s parliament (Verkhovna Rada), resulting in landmark cross-party agreements and changes to working practices.

The Institute has engaged government bodies and political parties alike to promote recruitment and training of women for leadership, while simultaneously supporting civil society’s efforts to help foster greater representation of women in Ukraine’s political life.

Similarly, the Institute has supported LGBTI organizations to improve their civic outreach and strengthen their capacity to build coalitions toward greater inclusion in public life.

On a long-term basis, NDI has collaborated with Ukrainian nonpartisan citizen election monitoring groups – particularly the group Opora – to assist them to monitor every major election in Ukraine over the last 25 years.

The Institute has also regularly organized international missions to observe Ukraine’s elections, including for this year’s presidential and parliamentary polls (in partnership with the International Republican Institute) that led to the election of Volodymyr Zelensky and a legislature filled with fresh, young political faces.

At the same time, working against such efforts is Russia’s “hybrid warfare” campaign – a combination of military, economic and political tactics meant to create political confusion, dysfunction, division in Ukrainian political society and erosion in citizens’ faith in democratic processes. To combat this, NDI’s cutting-edge research has examined Ukrainian audiences’ vulnerability to disinformation and the effectiveness of various countermeasures, and NDI has shared these findings with Ukrainian leaders, who are using them to design strategies and content to mitigate the challenge.

Our surveys affirm that Ukrainians consider the conflict in the eastern part of their country as their most pressing concern, and Russian military aggression as the most urgent threat to their way of life. In response, support for joining the EU and NATO remains strong nationally, and over the past few months has grown in every region of the country.

Whatever our views on recent events in the United States, it is a disservice to 45 million Ukrainians to call it “the Ukraine scandal.” The issues in question relate more to U.S. foreign policy and presidential politics than Ukraine. The international community, including Americans, should more accurately see Ukraine as a place deserving sustained support for its resilience, and a source of inspiration for other aspiring democracies in Eurasia and beyond. We at NDI will not waver in our longstanding support and investment in Ukraine’s democratic future.

To conduct this work, the Institute has benefited from the support of the National Endowment for Democracy, USAID, the U.S. State Department, as well as funds from the Swedish, Norwegian, Canadian, and United Kingdom governments, reflecting a broad trans-Atlantic commitment to Ukraine, as well as confidence in its future.  No other NDI country program has such varied international funding support.