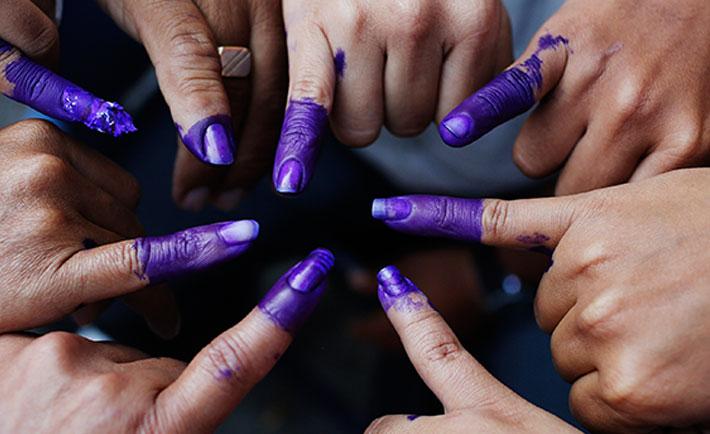 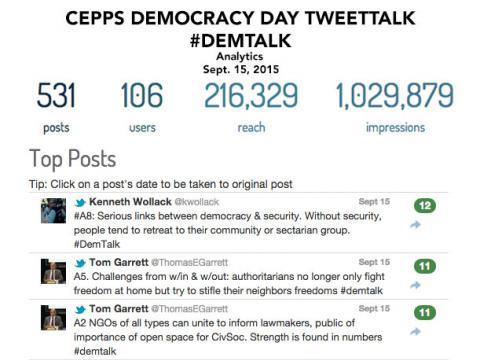 In recognition of International Day of Democracy, NDI partnered with the International Republican Institute (IRI) and International Foundation for Electoral Systems (IFES) to host an online discussion, or TweetTalk.

These three organizations constitute the principal partners in the Consortium for Elections and Political Process Strengthening (CEPPS), an organization that was founded in 1995 to pool the experience of the premier international organizations dedicated to democratic development.

Using the hashtag #DemTalk, respondents discussed both general shifts in democratic trends across the world and specific examples of programs that create “space for civil society” -- the theme of this year’s Democracy Day.

In response to a question about recent democratic successes, Wollack pointed out that there are too many examples to fit into an 140 character tweet, but reminded us that “democratic progress is not linear.” Democratic milestones are not always set in stone and can be reached in different ways. Garrett noted the Nigeria’s first peaceful transition of power between political parties during the country’s March 2015 election. @NDIWomen mentioned the high percentage of female members of parliament in Rwanda and Bolivia. Tunisia, Ghana, Guyana, Ukraine, Indonesia, Nigeria and others were highlighted as countries that have recently experienced democratic growth.

#A3 Too many for 1 tweet. But recent examples include Tunisia, Ghana, Ukraine, Indonesia, Nigeria. Democratic progress not linear. #DemTalk

#A5: One of the biggest challenges? The gender disparities re: access to democratic processes and institutions. #DemTalk #genderequality — NDI Gender & Women (@NDIWomen) September 15, 2015

Responding to a question on civil society success stories, Hana Murr, senior program assistant with NDI’s Political Parties team, mentioned the #YouStink movement in Lebanon. After the city landfill in Beirut reached capacity in July, the government started unloading garbage on the coast. Citizens formed the #YouStink movement to protest this problem. Murr credited this movement for encouraging the government consider viable technical alternatives to the city’s trash crisis.

Austin Robles, program officer for Latin American and the Caribbean at NDI, highlighted “persistent, concerted civic pressure” from civil society in Guatemala that forced the resignation and arrest of corrupt officials in the lead up to the September 6 presidential election.

During this TweetTalk there were 531 tweets, by 106 users with the  potential to reach of 216,329 unique users with over 1 million impressions. The majority of the 106 users were from the United States. However, users from Brazil, Uganda, Nigeria, Poland, Canada and India also joined the conversation. Questions and responses were tweeted in English, French and Spanish.

Sandra Majestic
Sandra Majestic is a project assistant for NDI's Public Affairs team. Prior to NDI, she worked in communications and advocacy at UNHCR and ACLU.
Connect with the author
LinkedIn