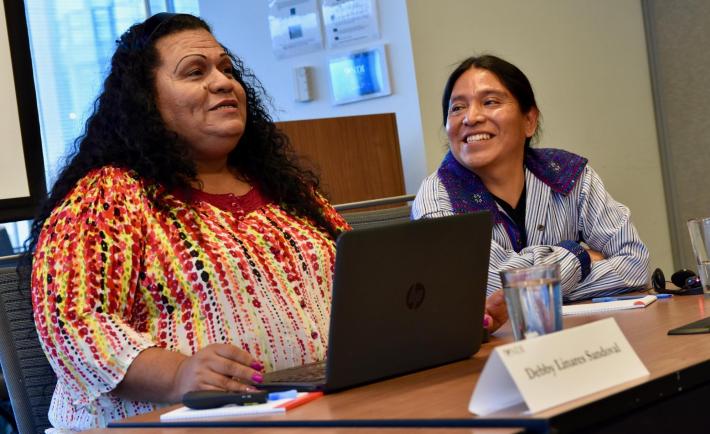 Debby Linares, during her presentation at NDI, with fellow human rights activist, Fernando Us Alvarez.

In the first week of December 2017, I had the chance to meet Debby Linares, a transgender woman and human rights activist from Guatemala, who soon became an inspiration to me on a personal level. Debby, who has been a human rights activist for the past 16 years, advocates for Lesbian, Gay, Bisexual, Transgender and Intersex (LGBTI) rights at the municipal and state level in Guatemala. During her visit to Washington, D.C., for the Victory Institute's 33rd Annual International LGBT Leadership Conference, Debby spent a day at the National Democratic Institute to present her recent work on a Gender Identity Law (Ley de Identidad de Género) in Guatemala and share updates on the current situation of human rights in the country.

Debby conveyed many of the struggles she and other transgender women face on a daily basis -- marginalization from the job market, which often leads to prostitution; restrictions in obtaining voter and travel documents with appropriate gender identification; and open discrimination in all aspects of life, including the use of gender-labeled public restrooms.

Despite these obstacles, Debby dedicates her life to advocating for LGBTI rights. Since 2001, Debby has worked with various civil society organizations in Guatemala to improve access to education and promote HIV/AIDS prevention in the transgender community. From 2014 to 2016, Debby worked at NDI’s office in Guatemala as an advisor on issues related to providing equal rights to LGBTI communities for a project carried-out through the Consortium for Elections and Political Process Strengthening (CEPPS).

Contemplating her journey, I wondered what Debby viewed as the role of international organizations in empowering traditionally marginalized individuals to affect positive change in their community. Debby answered this question during her presentation at NDI: “International support is important because it makes us feel less alone and it gives us strength to move forward.”

Debby first came to CEPPS because she knew that becoming involved in political processes would help expand rights for LGBTI communities in Guatemala. In her career, she has advocated for the inclusion of LGBTI groups in the creation and implementation of public policy on the rights of historically marginalized citizens. Recently, she has been a key player in drafting a Gender Identity Law in Guatemala through her work with the Consortium and later with the Queens of the Night Organization (Organización Trans Reinas de la Noche, OTRANS). If passed, this legislation would work to eradicate violence and discrimination by formally recognizing the gender identity of transgender citizens. While in D.C., Debby shared the draft law with civil society and non-governmental organizations to garner international support. She also met with representatives from the Human Rights Campaign and legislators from around the world who attended the Victory Institute’s conference.

Debby has also worked to create networks at the national level that reach beyond LGBTI communities, and integrate women and indigenous groups from more than 15 organizations. Her work with Fernando Us Alvarez, a human rights activist for both indigenous and LGBTI rights, is a prime example. Fernando accompanied Debby during her NDI presentation, and talked about the need for all marginalized groups in Guatemala to work together to promote equality and inclusion. Debby and Fernando’s joint efforts represent a promising outlook for the future of Guatemalan civil society, as their work reaches audiences both nationally and internationally.

Debby’s journey makes it clear that often times it only takes one person to spark large-scale change. Debby began defending her identity on a personal level before taking her advocacy for LGBTI rights to Guatemala’s national legislature. Now she hopes to spread her message and mission through collaboration with other human rights activists in Guatemala and abroad. As she fights for the rights of transgender people, she also fights for the rights of women and indigenous populations. Ultimately, she fights for greater inclusion and equality. This affects every single one of us, regardless of our nationality, gender identity or sexual orientation. It is now our turn, and that of the broader international community, to actively support legislation that ensures equality and tolerance for all, and help advocates like Debby make lasting change.

Olivia Sterling
Olivia Sterling is a project assistant for Latin America and the Caribbean at NDI, supporting programs in Colombia, Ecuador and Honduras. She graduated from Kenyon College in 2016 with a B.A. in...
Connect with the author
LinkedIn
NDI