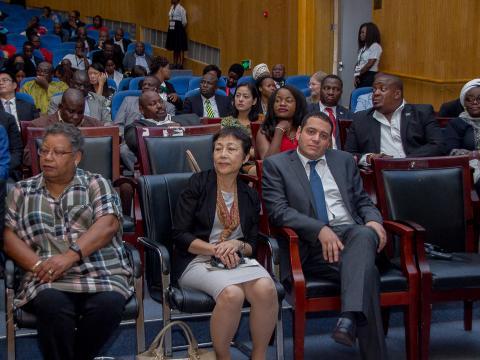 Stakeholders include: members of the international community, civil society leaders, students and academics, the business community, and most importantly, the common Malawian voter.

During the Malawi 2019 presidential campaign season, NDI played a key role in assembling a broad taskforce to organize, produce and broadcast a series of debates with presidential aspirants. This was only the second time since multi-party elections were first held in 1994 that candidates for Malawi’s highest office gathered on stage before a live studio and broadcast audience.

Through three debates, voters had an opportunity to see a wide range of candidates engage on key topical issues of their campaign. The candidates that participated in the debates were the current vice president, the main opposition leader, a member of the cabinet, leaders from new parties, and one independent candidate. Overall, six of the eight presidential candidates participated in the debates, many of whom are considered frontrunners in what is widely considered the closest election contest since 1994.

The impact of these debates was instantly visible across multiple media platforms in Malawi. Malawians in the Diaspora actively engaged via social media; local newspapers highlighted the debates, and citizens in Malawi openly discussed the performance of the candidates amongst themselves.

While organizing the debates brought the usual set of challenges, amplified by structural challenges in the Southern African country, such as frequent power outages, slow internet speed, and limited debate experience of moderators; the outcome was worth it. To make up for inefficiencies, the team worked tirelessly with the moderators to ensure they were adequately prepared for the debates and for last minute issues that would arise.

Naturally, there were also political challenges that required daily contact with the candidates and negotiations on a standardized format that would encourage all candidates to participate. Early in the process, NDI brought together leading civil society organizations and Malawi’s three leading media outlets – each with their own editorial inclinations – to jointly produce and air the live broadcasts. This created an atmosphere of unity and raised confidence in the debates by ensuring all candidates would be allowed the opportunity to speak directly with voters without any filtering by the media.

Democratic institutions in Malawi have made significant strides forward since Malawi’s first presidential election in 1994. Although Malawi is a young democracy and the debate culture is still fairly new, the presidential debate series proved to be a learning experience for all.

In countries like Malawi where debates are still in its formative years, its significance was even greater. It was evident that debating is still a very important and valuable activity not only for developed democracies but also emerging democracies. Each debate provided an opportunity to learn new things in preparation for future debates in the country.

While it is easy to dwell on subtle imperfections, these incremental enhancements to such an important democratic institution should not be overlooked. The 2019 Presidential Debate program in Malawi brought the candidates together in a neutral forum to make their case to millions of voters through radio, television and the internet, and that is what really matters. As the debate tradition continues, the quality of the debates will continue to improve, and Malawi will serve as a model for the region and beyond.