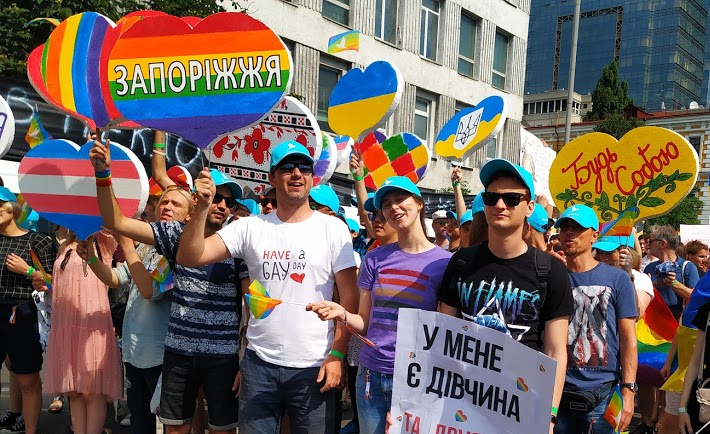 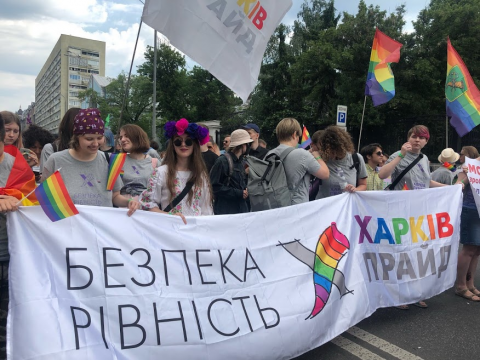 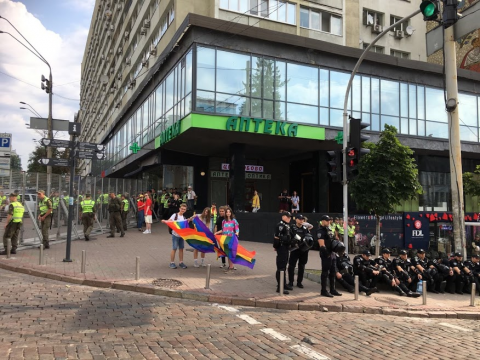 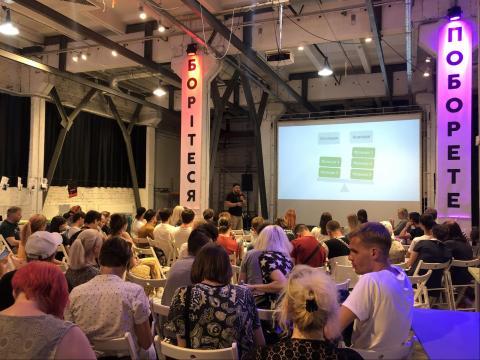 A representative from CentreUA explains how coalitions are formed as part of an NDI workshop organized for KyivPride Week.
Prev Next

On June 23, NDI partner KyivPride joined other LGBTI groups in organizing the largest Pride march ever in Ukraine, gathering about 8,000 participants from across the country. The event marks a substantial step forward for Ukraine’s lesbian, gay, bisexual, transgender, and intersex (LGBTI) communities, which remain largely marginalized in social and political life. The event took place during the active parliamentary election campaign and against a backdrop of targeted far-right activism that has resonated with only a small subsection of the Ukrainian public.

NDI believes all people in a democracy have the right to peaceful participation, but in many emerging democracies, large portions of the population are excluded from politics based on their age, gender, ethnicity, religion, disability, sexual orientation, gender identity, or other factors. NDI works to increase the participation of these communities, supporting local organizations to advocate for their own interests, develop relationships with allies, and achieve greater levels of equality.

As part of the KyivPride Week activities leading up to the Equality March, NDI organized two workshops for LGBTI activists. The first event took the form of a workshop for those who feared they could become victims of hate crimes, and those who had already been targeted. A lawyer specializing in discrimination provided step-by-step actions for victims, and shared a list of LGBTI-friendly lawyers throughout Ukraine who would provide their services pro bono, if necessary. At the second workshop, in order to help activists be better advocates to policymakers and make more informed voting decisions in general, representatives from NDI partners CentreUA and Institute Respublika gave a presentation on Ukraine’s political system, with an emphasis on the legislative branch and understanding party platforms ahead of parliamentary elections that will be held on July 21. Both workshops included practical exercises that allowed participants to practice and role-play their newly-acquired skills.

NDI’s work with LGBTI communities extends beyond KyivPride Week. To promote the inclusion of LGBTI people in Ukraine, NDI collaborates with six local organizations, including KyivPride, from around the country to provide ongoing technical assistance and support. In addition to supporting high-profile national events like the Equality March, NDI supports each partner’s regular public outreach and educational activities in their respective regions.

Beginning in 2017, NDI has advised partners on organizing information sessions aimed at encouraging tolerance and raising awareness among different professional groups, such as students, teachers, psychologists, and police officers, about the rights of homosexual people and challenges that they face in Ukraine using targeted, evidence-based messages that dispel myths and answer questions about LGBTI people. Research conducted by NDI in 2017 revealed that a significant portion of the Ukrainian population has never discussed LGBTI-related issues, leading to unformed or partially formed opinions and a prevalence of stereotypes. NDI found when people are presented with fact based information in a safe and inclusive environment they were much more likely to form tolerant opinions on inclusion issues. NDI is replicating these information sessions in six regions of Ukraine.

Despite a challenging environment, NDI and its partners are advancing the inclusion of marginalized communities by raising awareness of LGBTI people and providing fact-based information to targeted audiences. Through high-profile events like KyivPride’s Equality March, along with ongoing activities like information sessions, NDI and its partners are changing the way LGBTI people are perceived in Ukraine.