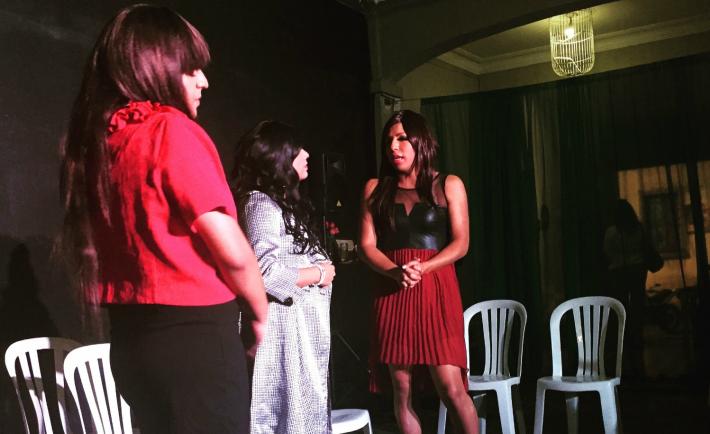 In the captivating play “Transforming Thoughts: The Realities of the LGBTI Communities,” members of the lesbian, gay, bisexual, transgender, and intersex (LGBTI) communities showed the harsh realities of life as a transgender woman in Guatemala. Misunderstood, invisible and discriminated against are messages that transcend each of the stories told from the stage. Through theatrical scenes, modeled after their own experiences, the play brings to life situations that many outside the LGBTI communities might not realize exist.

The play begins with actors wearing costumes that portray the stereotype of a transgender woman -- fishnet tights, stiletto shoes, ample make-up. The performers sing and dance and are flamboyant. Things don’t look so bad. Then the tone of the play quickly shifts and the actors begin to shed light on the personal and professional challenges that they have all faced.

Drawing on stories from their personal lives, and the broader LGBTI communities, the actors weave together scenes demonstrating lack of opportunity, abuse and survival. In one scene, a transgender woman seeks medical treatment and is treated with an unimaginable lack of dignity. As the scenes continue, the audience begins to understand the complex and challenging reality that the communities faces. In the final scene, a transgender woman has the opportunity to address a politician. She does not ask for help, she only says, “In your government, what will be our place in society?”

Her feelings of neglect and invisibility were apparent and resonated with the audience.  A transgender audience member, who traveled from another part of the country to attend, commented, “If it’s hard in the capital, imagine how hard it is in the countryside. When you said that society doesn’t give you another option – that really resonated with me, because I know how hard it is to find opportunities and I want to thank you for candidly sharing the very complicated struggle we face.”

During the play's five scenes, which were written and produced by members of the LGBTI communities with the support of CEPPS and USAID, the audience gained a glimpse into the everyday struggles and discrimination that transgender women face in their professional and personal lives. Put on by NDI partner National Network for Sexual Diversity and HIV (REDNADS) as part of the the CEPPS Elections Project: More Inclusion, Less Violence, the theater piece was designed to increase awareness of the discrimination faced by transgender women by giving them an opportunity to tell their stories. Until the stigma and discrimination around being a member of the LGBTI communities is confronted, these members of society will continue to be marginalized.

Human rights and the equal participation of all citizens in the political process are fundamental to democracy. To that end, CEPPS and NDI seek to institutionalize changes that empower the LGBTI communities. Recently, CEPPS helped update the training manuals for poll workers and trained government officials on tolerance and sensitivity. To promote dialogue and provide opportunities for citizens to voice their needs, CEPPS organized forums between candidates and members of the LGBTI communities. For many LGBTI individuals who attended, this was their first opportunity to participate in a political event. In another first, a group of transgender women from CEPPS’ partner organization Multicultural Network for Transgender Women (REDMMUTRANS) conducted an election day observation effort focused on transgender rights. In the recent elections, Sandra Morán became the first openly gay member of the Guatemalan Congress, providing the LGBTI communities with an advocate for the first time in the legislature.

These advances are necessary and important first steps in the struggle for LGBTI rights in Guatemala. “My fight as an activist is about giving people a voice who do not have one,” said Debby Linares Sandoval -- a transgender woman, LGBTI activist, and CEPPS advisor -- during a recent interview with USAID. “It’s to provoke civil society and the government to give us the same opportunities as any other citizen, with respect.” For these changes to be institutionalized and truly take effect for everyone, there needs to be greater understanding of the challenges that LGBTI people face and what it means to identify as LGBTI. The play, Transforming Thoughts, is one example of how art can be used to encourage tolerance, understanding and political participation.