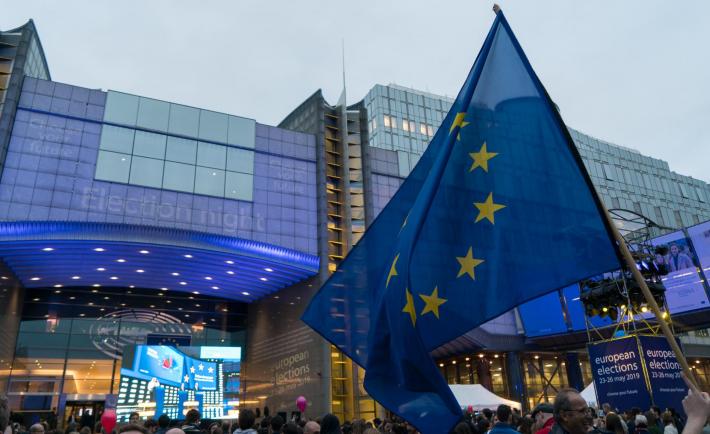 As four days of voting for the 2019 European Parliament (EP) elections closed on May 26, crowds await results from the European Union’s 28 member states and the new composition of the EP for the next five years.  CC-BY-4.0: © European Union 2019 – Source: EP

The European parliamentary elections, held in May, came at a time of political soul-searching for the countries of Central Europe –the Czech Republic, Hungary, Poland, and Slovakia – as they wrestle with European integration, constitutional democracy, and national identity.

The elections saw common trends in Central Europe: voters came out in higher numbers this year compared to 2014; campaigns largely focused on domestic issues and Eurosceptic rhetoric; ruling parties gained their support from the rural areas, while opposition dominated in cities; newer political entrants made a strong showing; and far-right politics continued to show strongly.

Voters in the four “Visegrad” countries came out to the polls in higher numbers. Poland had the highest increase, nearly doubling turnout from 23.8 percent in 2014 to 45.6 percent in 2019, followed by Hungary which saw a 14-point increase compared to five years ago. Although Czech and Slovak citizens turned out the lowest numbers in the entire EU, their voters increased by 10 and nine points, respectively. These numbers underscore an increased focus among citizens on the EU, as well as on the issues discussed during campaigns in their respective countries.

The campaigns focused largely on domestic issues, particularly in Poland and Slovakia.  Polish parties, particularly the opposition European Coalition, focused on healthcare and social spending. Slovak opposition parties, such as Progressive Slovakia/Together discussed government accountability. Eurosceptic rhetoric was prevalent in the Czech Republic and Hungary. Czech parties focused on the migrant crisis and double standards in food quality between western and eastern members of the EU. The ruling Fidesz party was hyper-focused on migration and what it labeled as an overreaching Brussels bureaucracy. Brussels has launched a number of infringement procedures against the Hungarian government alleging violation of EU rules on asylum and civil society.

Across the region, we witnessed a high mobilization of voters in urban areas, especially capital cities, in support of opposition parties. These parties won in Bratislava, Prague, and Warsaw, largely owing to a sense of disillusionment among urban voters with their countries’ respective ruling parties. The one capital to the contrary is Budapest, where Fidesz claimed a 21 point lead over the next highest vote-getter, the opposition Democratic Coalition party. Ruling parties maintained their lead in the polls in all countries except Slovakia, and this is due in large part to building their constituent bases outside of major cities. These bases turned out in high enough numbers to keep the ruling parties in their dominant positions as opposition parties struggle to make inroads into rural areas.

The Czech Republic’s Pirate Party entered parliament in 2017 and upped its support this time with strong grassroots campaigning in a political atmosphere marked by increasing public outrage over alleged financial misconduct by the Prime Minister, whose ANO party saw its support decline noticeably.  Hungary’s Momentum Movement focused on building a national grassroots network and garnered 10 percent, doubling expectations.  Poland’s Wiosna party, led by former MP and mayor Robert Biedron, which garnered 6 percent of the vote in its electoral debut, making it one of only three parties to represent Poland in the European Parliament. Slovakia’s Progressive Slovakia and Together parties formed a coalition that beat the ruling SMER-SD party by five points with 20 percent of the vote, making this the first time since 2002 that the social democrats did not win a major national contest. This victory comes on the heels of Zuzana Caputova’s surprise win in presidential elections. Backed by Progressive Slovakia, Caputova ran on government accountability and anti-corruption.

Far-right political parties ran in each country, and won European Parliament seats in the Czech Republic and Slovakia.  People’s Party—Our Slovakia, led by Marian Kotleba, was the third highest vote-getter at 12 percent.  The Czech Freedom and Direct Democracy Party won 9 percent of the vote. Far-right support is likely to go up over the next wo years as each country convenes national and local elections.

With the second lowest rate of voter turnout in the EU, it is not a huge surprise that the Czech Republic saw its EP election campaign dominated by issues of national interest. Even cross-border issues, like food quality standards and migration, were approached from a national perspective. If analysts were questioning how strong the ruling ANO party is, this election highlights its continued dominance despite multiple corruption scandals faced by the party leader and prime minister. The biggest loser of this election was the Czech Social Democratic Party (CSSD) which missed the threshold to maintain its presence in the EP with less than 4 percent of the vote. CSSD has steadily lost support in the last national and local polls.

Hungary’s turnout this year was the highest for any EP election in the country’s history, with more than half of all voters supporting the ruling coalition. Fidesz beat its nearest opponent, the opposition Democratic Coalition, by 36 points in a landslide victory following an emotionally driven campaign of Euroscepticism targeted at one issue—migration. Hungary’s two leading parliamentary opposition party, Jobbik and the MSZP, saw their support fall by about 13 and five points, respectively, compared to last year’s legislative elections. Of the region’s capital cities, Budapest was the only one to vote in support of the ruling party, and by a wide margin – Fidesz 41% and Democratic Coalition 19%.

The EP elections in Poland are widely viewed as a testing ground for the two sets of national elections expected within the next year. The fragmented Polish opposition tried its hand at experimentation for this election as five leading opposition parties formed the pro-EU European Coalition. Though the Coalition was founded on the shared principle that Poland is both a strong contributor to and beneficiary of being an EU member state, its campaign was still largely driven by domestic issues in response to the ruling party’s focus on social spending and taxes. This campaign was meant as a battleground between one political sphere that views its place in an integrated Europe versus another that seeks to limit EU powers over the state. The European Coalition invested a great deal of time and energy into uniting a broad spectrum of political identities under one umbrella, and in the end struggled to develop a clear and distinctive message to voters ultimately leading to its defeat to Law and Justice by 7 points. As this election was seen as a referendum on the ruling party, the Coalition’s loss places further pressure on the fractured opposition to perform in the upcoming parliamentary and presidential elections.

With the lowest country turnout in the EU, Slovakia’s featured dueling political opinions. The surprising win of Progressive Slovakia and Together underscores a desire for political accountability as the Coalition beat the ruling SMER-SD by nearly five points. This victory follows the Progressive Slovakia-backed elections of the Bratislava mayor and the country’s recently inaugurated president, Zuzana Caputova. The Coalition showed that it is possible to run an effective and responsive campaign on a positive vision of shared democratic values and EU integration. On the opposing end of the political spectrum, the EP elections in Slovakia saw increased support for far-right forces whose vote-share increased by four points since the 2016 parliamentary elections. These results show a shift away from the country’s historic mainstream political actors toward two opposing forces, progressive and pro-European emerging leaders and anti-establishment, far-right extremists.

Alexander Pommer
Alexander Pommer is a Program Officer with NDI’s Central and Eastern Europe team where he oversees parliamentary support and political party programs in Central Europe and the Western Balkans.
Connect with the author
LinkedIn
NDI