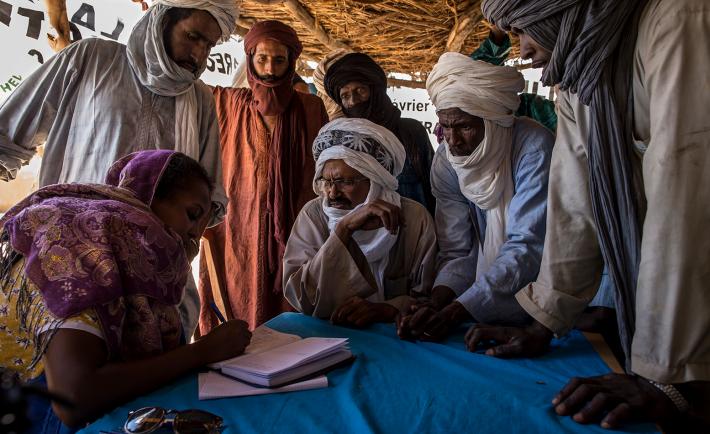 Citizens in Mali consulting with the United Nations.

NDI Chairman Madeleine Albright continues to actively support the US Institute of Peace’s Task Force on Extremism in Fragile States, and will participate on January 7 in a USIP, NDI, GW Bush Institute co-hosted event on “A Governance Agenda for Preventing Violence in a Fractured World”. The event focuses on a key finding of the Task Force report, A New Approach to Preventing Violent Extremism, that the United States has been responding to cycles of violence, rather than rooting out and eradicating their causes. Secretary Albright has said that “preventing violent extremism is not just a development and security issue. At its essence, it is a democracy and governance challenge. We have to be prepared to deal with the consequences of extremism, but it would be smarter to get ahead and prevent it by emphasizing economic security, political opportunity and democratic governance.”

Fragility is often defined as the breakdown in the social contract between state and society. In the case of violent extremism, this breakdown creates “fertile ground for extremists’ attempts to create alternative political orders,” according to the USIP Task Force report, in the face of “community alienation by an oppressive, corrupt or unresponsive government.” In the case of extreme poverty, as identified by the Commission on State Fragility, Growth and Development (the Cameron Report) the governments of fragile states “lack the legitimacy and capacity to deliver the jobs, public services, and opportunities their people need.” Their continued failure consigns their citizens to cycles of violence and enduring poverty.

The USIP Task Force report supports a growing body of evidence that preventing violence and stabilizing fragile states in the aftermath of violence is a “political endeavor” that requires aligning US government and international efforts to support local and national leaders as they seek to strengthen state legitimacy. Violent extremism prevention is locally-driven and implemented through partnerships with local actors with the political will to drive reforms and who are trusted by their communities.

Across the pond, the UK’s Cameron report on Escaping the Fragility Trap came to a similar conclusion. Establishing the building blocks of democratic politics – the rule of law, checks and balances, and protection of minority rights – is the pathway out of fragility. In fragile states, where political power is weakly institutionalized, establishing democratic and inclusive political processes means engaging with and leveraging informal political networks and actors, concluded the UK Stabilization Unit in a comprehensive study on elite bargains.

Establishing democratic processes and responsive governance in fragile states is as much about engaging and leveraging the informal networks of power and transforming them, as it is about strengthening institutions and implementing technical programs. Focusing on the political patterns and dimensions of fragility is central: converting zero sum competition to consensus politics, opposing the political processes that support elite capture, addressing the political roots of security force predation while empowering citizens and strengthening civil society oversight and advocacy.

NDI has an established, decades-long presence in states affected by fragility and violence. Countries that remain an institutional priority because the consequences of their fragility – mass migration, increasing violence – are affecting millions of lives and a US national security imperative. With the emergence of global governance and economic competitors, such as China and Russia, citizens and countries that have spoken clearly for democracy must be supported. In Niger, Mali, Burkina Faso, governing regimes have chosen democracy. Their collapse would call into question democracy as a governance model. In 2019, citizens globally have demonstrated in support of the democratic principle of citizen responsive government. Their call to hold accountable regimes that have perverted democratic principles and processes shows a renewed confidence in the promise of democratic governance.

NDI’s work in fragile states focuses on people, politics and processes. Its programs, in many ways, implement the emerging consensus on fragile states’ lessons learned:

People:  In fragile states, security institutions are organized to protect the regime, or are kept weak so that elites can act with impunity. In both cases, security actors prey on citizens to ensure regime stability, or their own economic survival. A normative shift must occur in which citizens engage in and have influence over how they are governed. This includes security governance where citizen security becomes the focus of security actors. In 2016, in Ouagadougou, NDI convened parliamentarians, civil society organizations and executive staffers from Burkina Faso, Mali and Niger to discuss regional security threats and the need for a fundamental refocus on human security, including updating a legal framework so that the identified threats would be managed while respecting human rights, bringing citizens and security forces together in dialogue, especially at the borders, and, to elevate women’s interests and perspectives into account.

Processes:  In authoritarian transitions, the challenge is often too much state administration and the focus is on creating space for new political actors and institutions.  In fragile states, large voids exist where state administration and formal political processes are absent. In February 2018, NDI convened a three-day Regional Parliamentary Civil Society Forum on Democratic Governance of the Security Sector in the Liptako-Gourma Region that borders the three countries of Burkina Faso, Mali and Niger. The meeting was an opportunity for parliamentarians to understand their constituents’ security concerns, and for parliamentarians and for civil society organizations to more actively engage in civilian oversight of security forces. The MPs finished the forum by creating a consultation framework linking the three parliaments’ defense and security commissions.

Politics: In states where power is weakly institutionalized, informal political pacts take the place of governance systems: elites take care of themselves across political divides, leadership successions reflect elite bargaining rather than the popular will. Over the last two decades, Africa has made notable progress in achieving democratic and peaceful transitions of executive power. However, some leaders on the continent have and/or are planning to extend their tenure by altering or eliminating constitutional term limits. In 2019, NDI convened the National Term Limits Summit resulting in the Niamey Declaration in Support of Constitutionalism for Democratic Consolidation and the Peaceful Transfer of Power – an attempt to strengthen the formal limitations on political power and to counter illegitimate informal elite bargains.

In these ways, NDI is seeking to transform the politics of fragile states so that citizens are at the core of government policies and interests.