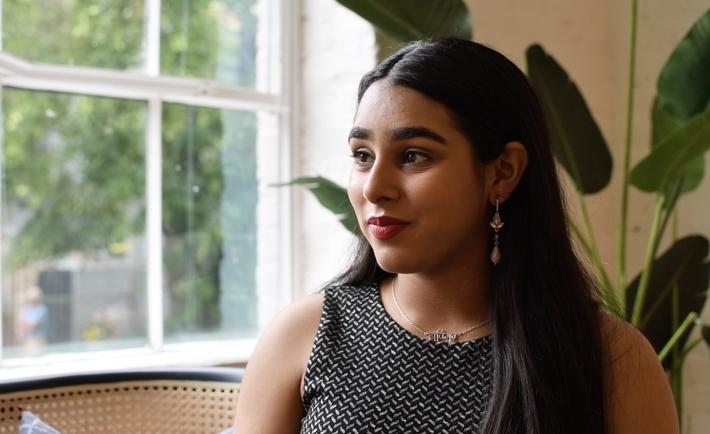 Tarina Ahuja is a high school senior, a political activist and co-founder of the nonprofit Young Khalsa Girls.

The DemWorks Podcast and Video series will extend International Youth Day (August 12) to celebrate and amplify the political engagement of young women and young men throughout the month of August.  In this episode, Molly Middlehurst, Senior Program Officer on the Gender, Women and Democracy team at NDI, speaks to the inspirational Tarina Ahuja.

Tarina is a high school senior, a political activist and co-founder of the nonprofit Young Khalsa Girls. She discusses what it means to be a risk taker, and why it’s important for projects like Running Start help young women build the confidence to start participating in politics.

NDI is working with Running Start, Encompass and Women Win on the DISRUPTHER program.  DISRUPTHER will build a cadre of politically active adolescent girls who are engaged citizens, civic leaders, and changemakers in their communities and countries around the world.

Tarina Ahuja: Everybody should be involved in trying to manifest their visions into reality, because at the end of the day all of us are working towards a similar goal: Creating a world that's better for all of us.

Molly Middlehurst: What does risk-taking mean to you as a young woman and a young political activist?

Tarina: I think for me, taking a risk means overcoming a fear because inherently risks are dangerous, they're perilous, they're scary, but being able to overcome that activation energy. Because at the end of the day risks are worth it, because you're doing something that's bigger than yourself, because you want to make a change, and you want to have an impact.

Molly: You're currently interning for Senator Cory Booker's office on the Hill. Do you have any major takeaways from that early political experience that you've had?

Tarina: My biggest takeaway is that change is inevitable, and we are capable of making that change. Because walking in the halls of the Capitol, seeing the rooms where history is made, seeing the people and working with the people that are making history—it's so incredibly inspiring. But more than that, it's reinvigorating. Because right now, we're in a political moment that sometimes can feel divisive, and it can sometimes feel polarized, but knowing at the end of the day we are all capable of coming together, finding that middle ground and making change that works for everyone, and that's impactful and thoughtful on the world around us. So I think that's something that's very powerful for me to see as a young person working in a political field. And I think this is more affirmed for me by my mentorship from Running Start, because they've taught me everything about logistically and practically how you work in the political field, how you present yourself.

Molly: Around the same time that young men and boys' political aspirations and their horizons are really blossoming and opening in front of them, for young women and girls they actually see some of their opportunities, some of their ambitions start to restrict. It's one of the reasons why NDI is launching in partnership with Running Start our new program DISRUPTHER, which is really about making sure that adolescent girls and young women have the interest and have the confidence to start participating in politics around the world and in their local communities.

Tarina: And I'm so excited to be one of the earliest ambassadors for the DISRUPTHER program, because I think tapping into the talents and passions of women in our country and around the world—that's how we're gonna change the face of what politics looks like, and I think that's incredibly exciting. Take for instance the young activist Greta Thunberg, the climate change activist in Sweden. She's having a solitary protest and making a call to action, but that's echoing around the world because people are inspired and they're making their own calls to action, which is what's going to allow us to make real change. And that's incredible to bear witness to.