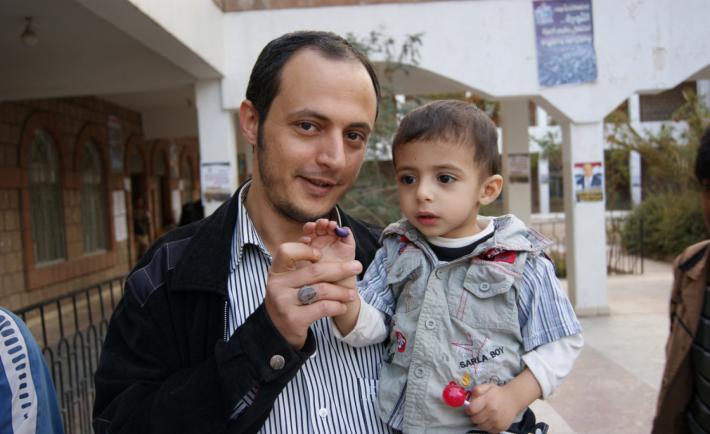 As Yemen’s tragic war – fueled by a regional rivalry between the Kingdom of Saudi Arabia and the United Arab Emirates on one side and Iran on the other – drags on, the antagonists in the conflict have been stubbornly resistant to the efforts of U.N. negotiators to broker compromise and unwilling to make the first major steps toward peace. Yet, there is a curious and slightly hopeful political soap opera playing out in plain sight.

The internationally recognized government of Abd Rabo Mansur Hadi and the Houthi rebels (also known by their formal name, Ansar Allah) are pursuing separate but concurrent strategies to increase their international legitimacy by reinvigorating Yemen’s parliament. Ansar Allah has also released a groundbreaking policy document that may show signs of a new appreciation for democratic processes. By seeking to achieve a legal quorum in parliament and drafting a series of policy proposals that could be used by the public to hold their regime accountable, the Houthis are demonstrating a surprising affinity to some of the forms of democracy. Their commitment to the substance of democracy is yet to be proven.

By seeking to achieve a legal quorum in parliament and drafting a series of policy proposals that could be used by the public to hold their regime accountable, the Houthis are demonstrating a surprising affinity to some of the forms of democracy.

The parliament, last elected in 2003, has lost 44 members since that time to resignations and deaths. The remaining 256 members have split loyalties with approximately 111 members still attending sessions in Houthi-controlled city of Sana’a and an unknown number loyal to President Hadi residing in Southern Yemen, Riyadh, Cairo and other locations. The incumbent speaker of parliament, Yahya Al Raee, is allied with the Houthis and resides in Sana’a.

The parliament in Sana’a has been unable to achieve a quorum of 134 members since the conflict began in 2014. The members of parliament loyal to President Hadi have not met in that time. Over the past few months, the Houthis have expressed a desire to fill vacant seats so the parliament in Sana’a can achieve quorum and pass laws to further a Houthi governing agenda.

A hollowed out but still functioning Supreme Council for Elections and Referenda (SCER) has been tasked by the Houthis with organizing by-elections for the 45 vacant seats. Voting – at least in Houthi controlled areas – will take place on Saturday, April 13. It is unlikely that the newly elected MPs will be recognized by the Hadi government, but nevertheless, a number of new MPs will soon join the Sana’a-based assembly.

Concurrently, the Hadi government is convening a hastily organized session of their loyalist MPs in the southern Yemen city of Sayoun – also slated to be held on Saturday, April 13. Negotiations were held last week within the Hadi-aligned parliament faction to choose a speaker to rival Sanaa’s Al Raee. After a contentious negotiating session where southern political factions demanded more representation in the parliament's leadership, a compromise created a rotating six month speakership. General People’s Congress (Yemen’s former ruling party) party official Sultan Barakani was chosen to fill the role for six months.

Neither side has a particularly compelling case for parliamentary legitimacy. The Houthis took power after a coup and have strong-armed some MPs into attending sessions in Sana’a. The Hadi government is based in Saudi Arabia and has shown little interest in the parliament. One could ignore these competing parliamentary exercises as meaningless political theater designed to impress the international community, but they belie an interesting emerging trend – Ansar Allah seems to be seeking democratic legitimacy.

The Houthis have a well-deserved reputation for brutality – the grisly murder of former President Ali Abdullah Saleh (and one time Houthi ally) in 2017 is a case in point – and there are also daily reports of repression, violence and censorship. Yet, they have governed the capital city and surrounding areas for a number of years and created a semblance of stability and normalcy.

Surprisingly, behind the scenes, Ansar Allah political leaders have been working on a policy document resembling what a political party or a parliamentary caucus might produce. The document, titled, “National Vision for Building the Modern Yemeni State” was released to the public the week of April 8 and Ansar Allah leaders have encouraged other political parties and the public to provide input and commentary.

The plan envisions a democratic, multi-party system and a unified state with a national parliament and elected local government. It has indicators and benchmarks for success. There are plans for every major function of government and few, if any, references to religion. The policy plan represents the most complete and comprehensive politicization of Houthi/Ansar Allah militancy ever produced. While the sudden democratic impulses of the Houthis must be taken with a large grain of salt, the document, whether to be taken literally or not, heralds a new phase for the movement.

The evolution of Ansar Allah toward politics and the formation of a political party is positive and creates a common language and common ground for Yemen’s political leaders and the international community to engage with the Houthis in a discussion about the future of Yemen.

The Houthis have typically behaved as a theological, regional movement drawing most of their support from Yemen’s Zaydi Shia community. They have resisted the evolution to a political entity and have based their legitimacy on Zaydi and Yemeni cultural authenticity. Political stances have usually been confined to fierce protection of the autonomy of their traditional territories in northern Yemen. They have never before created a comprehensive political platform or described their aims in national political terms.

It is important for the international community to capitalize on any openings that may lead to peace and stability in Yemen. While compromised and limited by-elections and the meeting of a rump parliament in southern Yemen fall short of a true breakthrough, the fact that both sides in the conflict are seeking legitimacy through the forms and institutions of democracy creates some hope and an opening for dialog. The evolution of Ansar Allah toward politics and the formation of a political party is positive and creates a common language and common ground for Yemen’s political leaders and the international community to engage with the Houthis in a discussion about the future of Yemen. These developments bear a close watch in the coming weeks.

Leslie Campbell
Leslie Campbell is a senior associate and regional director of Middle East and North Africa programs at the National Democratic Institute.
Connect with the author
NDI