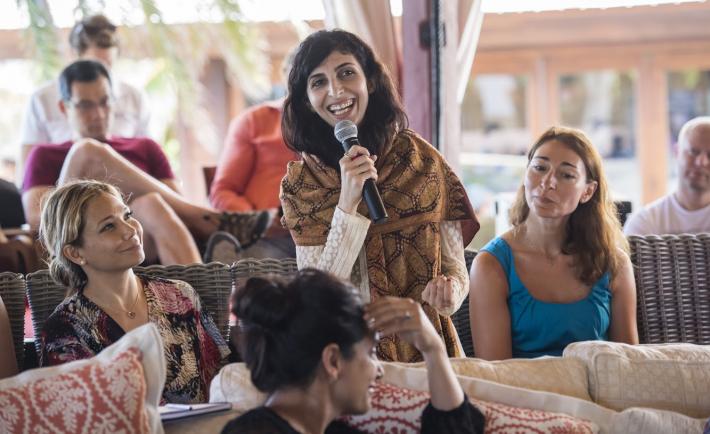 Attendees at the 2017 Blockchain Summit. From left to right as Heidi Pease from UCLA Blockchain Lab; Saadia Madsbjerg from Rockefeller (in front); Roya Mahboob (mic); Stela Mocan of World Bank.

Editor’s Note: Since last year, NDI has worked with the Blockchain Trust Accelerator in partnership with the New America Foundation and the Bitfury Group to explore potential uses for Blockchain technology to improve government and civil society globally.

In late July, a broad range of technology, business, philanthropy and policy leaders from around the world gathered at the third annual Blockchain Summit. This was no ordinary technology conference. First, nearly half the attendees were women; and second, the discussion centered less on technology and more on practical ways these new blockchain-based technology tools can be used for the public good.

Simply put, “blockchain” is a type of database used to store and keep public records. Changes to any records are automatically and permanently tracked and identical copies are stored in multiple locations. It is often described as a decentralized and distributed bookkeeping or ledger system designed to be a more secure and efficient way to transfer digital information.

Today, blockchain is best known as the technology underlying Bitcoin and other digital currencies. But the July gathering was devoted to exploring other non-financial industry uses where blockchain’s secure and verified digital record keeping also might prove valuable.

For centuries, most countries have relied almost solely on physical records to establish a person’s identity and assets. Often it’s the job of various government agencies to act as the “source of truth” – the keeper and trusted validator of vital records, documents, and other important information.  All over the world, people rely on government documents not only to prove who they are (birth & death certificates, marriage licenses, passports, driver’s licenses, social security cards, voter cards), but also what they own (land property registries, titles of personal property, corporate registrations, tax records and tax refunds).

Sometimes non-government institutions also act as third party validators of our identity and assets. For example, when we write a check or transfer money, banks confirm we have enough money in our account; when we go to the hospital, doctors verify our medical records; and when we need to prove our educational credentials, we ask our schools to confirm our education and degrees.

Many parts of the developed world have come to rely on a vast network of notary publics, bank clearinghouses, and other institutions to create the level of trust (and prevent fraud and outright theft) people need to confidently interact with others, transfer property and assets, and ultimately fuel economic growth. However, in the developing world, this infrastructure can be corrupt or simply non-existent -– creating huge problems with discrimination or fraud and creating tremendous frustration when citizens attempt to get things done with their governments.

Establishing Trust and Keeping Records in the Digital Age

Today, the process for verifying online who you are and what you own is complicated. Usually, it involves some combination of faxing or emailing copies of our physical records and opening/signing in to private, closed software systems (Facebook, Google, your bank website) that rely on passwords and the name of your first pet to verify your identity. As we’ve all come to learn, this system is cumbersome, inefficient, and because it often involves a “single point of failure,” highly susceptible to hacking and theft.

Blockchain technology has the potential to help solve these problems by creating a more secure, transparent and easily verified system for keeping track of all sorts of digital records and transactions. It also has the potential to create new ways to verify information and provide trust while at the same time providing people more control over their own identity and assets.

Blockchain works by, among other things, automatically date/time stamping and tracking every record (and any change to that record), as well as allowing for self-executing contract terms and real-time distribution of those records to multiple locations. Advocates explain that this process provides secure, permanent, incorruptible records that can be accessed from any mobile device leading to more efficiency and less friction (due to automation and reduced reliance on middlemen), less “leakage” (aka corruption and theft), and greater trust (in an often less than trustworthy digital world).

With a market capitalization exceeding $100 billion and growing, the digital currency market has already become a valuable proving ground for blockchain technology. Beyond the financial industry, however, it is easy to imagine other areas where blockchain’s features could be valuable for government and civil society groups.

In only 10 years, the use of blockchain in the financial industry has grown dramatically and appears to be on a trajectory to continue. Whether those technology tools can be economically and practically scaled to benefit the public good, is still an open question.

The only way to find out is for those in government and civil society to begin working closely with technologists to identify and test pilot projects to discover the best opportunities for blockchain’s tenets (transparent, automatic, secure, verified, distributed, incorruptible, mobile digital records) to make a positive impact on people’s lives. While blockchain won’t solve every problem, it may provide valuable lessons for how to re-think government service delivery for the digital age.

It’s time to test the ability of blockchain technology to grow beyond the financial industry and effectively unleash technology for the public good.  If we succeed, we just might, in the words of Thomas Paine, “have it in our power to begin the world over again,” and in doing so greatly improve the daily lives of millions of people.

Robin Carnahan
Robin Carnahan is a member of the NDI board of directors. She is the former secretary of state of Missouri and has facilitated numerous NDI programs around the world.
Connect with the author
NDI