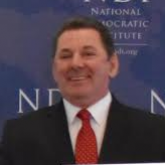 Ivan Doherty is NDI's senior associate and director of political party programs. As the Institute's principal in-house expert on political party development, he currently oversees party development programs in more than 55 countries and is responsible for building NDI's relationships with political party international organizations and other democracy foundations. Mr. Doherty has also served as a member of the steering committee of the World Movement for Democracy, and leads NDI's participation in a number of other global and regional initiatives, including the Community of Democracies, the OAS Inter-American Forum on Political Parties, and the U.N. Conference on New or Restored Democracies.

Mr. Doherty is an adjunct professor at Georgetown University lecturing on political parties and governance and is also a guest lecturer at a number of institutions including the U.S. State Department Foreign Service Training Institute and the Walsh School of Foreign Service, Georgetown University. Mr. Doherty also served as foreign policy advisor from 2005 to 2008 to Gov. Howard Dean, chairman of the Democratic National Committee.

Mr. Doherty has an extensive background in political party development and international affairs. He worked for more than 15 years with Ireland's Fine Gael Party in a number of senior positions, including assistant national director of organization, deputy general secretary, and general secretary from 1990 to 1994. Appointed government program manager in 1994, Mr. Doherty was assigned to Ireland's Ministry of Tourism and Foreign Trade. He has served as senior advisor to the European People's Party parliamentary grouping in the European Parliament, played a role in the Irish Presidency of the EU and the WTO Ministerial in 1996, and conducted Irish trade promotion missions around the world.

Mr. Doherty speaks and writes often about political parties and political party development. His publications include "Democracy Out of Balance: Civil Society Can't Replace Political Parties", which appeared in Policy Review in 2001.

Political parties are essential for democracy, they offer citizens meaningful choices and opportunities to mobilize behind different visions for their society. However, around the globe political parties are consistently ranked among the least trusted democratic institutions. While there are many reasons for this distrust, it does have some people wrongly asking if political parties are still necessary in today’s changing technological environment or if they’re a dying species of the 20th century. However, parties remain the only institutions that offer citizens meaningful choices in governance, avenues for political participation and opportunities to shape their country’s future. They therefore remain fundamental to the healthy functioning of democratic systems. To address this disconnect between citizens and political parties, NDI's Political Parties team has launched this Party Renewal Initiative to discuss how parties can better adapt to the 21st century.