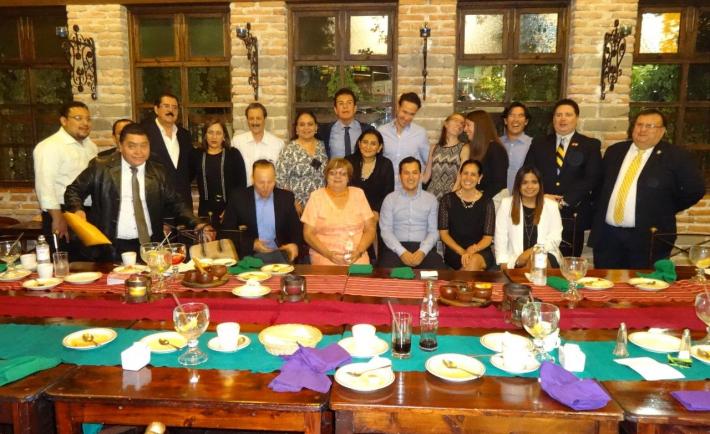 Leaders from seven major political parties in Honduras, as well as civil society groups, attended a dinner hosted by NDI and the Washington Office on Latin America (WOLA) on August 11, 2015, to discuss how to advance important democracy initiatives in Honduras. The event was the first time the leaders had convened in two years.

Over the past three months, Hondurans have taken to the streets to call attention to corruption and impunity in response to the latest corruption scandal involving the embezzlement of $120 million from the Honduras Social Security Institute. The United Nations and the Organization of American States (OAS) recently sent missions to the country at the request of the Honduran government to facilitate a national dialogue in order to stabilize the unrest.

Unrest has been noticeable in Honduras for years, particularly after a 2009 constitutional crisis culminated in a coup that removed President Manuel Zelaya from office. Although the 2013 presidential elections helped the office of the president regain a degree of legitimacy, democracy in Honduras continues to face significant challenges. Porfirio Lobo Sosa, president of Honduras between 2010 and 2014, was elected in 2009 elections held against the backdrop of OAS sanctions and an elections boycott by a substantial portion of the country.

The current president, Juan Orlando Hernández, elected in 2013 in an election that included representatives of all Honduran political forces--among them a new party led by former President Zelaya--now faces huge national problems amid deep political divisions and no consensus on how to proceed with long-overdue political and security reforms. While President Hernández has implemented measures to reverse polarization, violence and impunity, progress has been slow.

To advance these efforts and create some common ground, NDI and the Washington Office on Latin America (WOLA) convened Honduran political leaders from all seven parties legally registered in the country, as well as civil society partners, for a dinner meeting on August 11, 2015. The discussions covered crime and violence in the region, high levels of impunity for elected officials and citizen demands for government accountability, including the proposal voiced by many Honduran demonstrators to create an International Commission against Impunity in Honduras (CICIH), similar to the international commission in Guatemala.

This dinner was the first time that many of the political leaders had sat down with their counterparts in two years, since the 2013 elections. There were a few points of consensus, including the need for international assistance to strengthen institutions to combat crime and corruption and the need for political and electoral reforms. At the close of the dinner, the ruling National Party’s president thanked NDI “for the opportunity to practice dialogue.” The OAS recently announced that party leaders will be called upon soon to participate in the national dialogue.

With support from the Department of State's Bureau for Democracy, Human Rights and Labor, NDI is working with a broad group of civil society organizations that joined to form the Alliance for Peace and Justice (Alianza por la Paz y la Justicia, APJ) in an effort to promote more concerted advocacy and monitoring efforts on security policy and institutional reform, including combatting impunity. With support from the National Endowment for Democracy (NED), NDI is working with both political parties and civil society to identify, analyze and advocate for political and electoral reforms ahead of the 2017 elections.

Deborah Ullmer
Deborah Ullmer is NDI's resident senior director for Honduras. She brings to the position almost 20 years of experience managing a range of democracy assistance programs in Latin America and Southern...
Connect with the author
LinkedIn
NDI