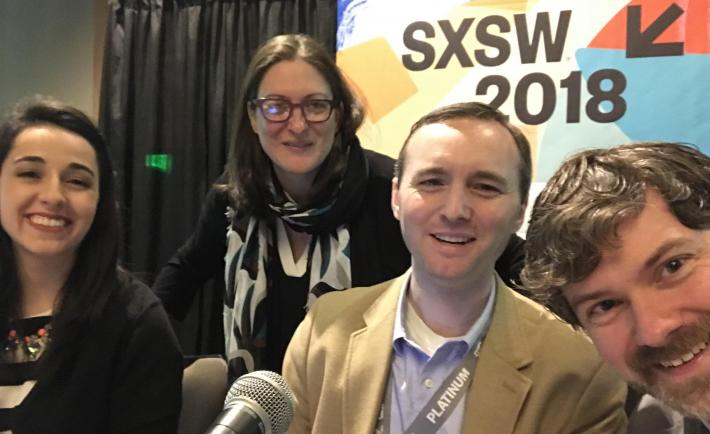 Why is a democracy organization into blockchain? What is this blockchain stuff, anyways? Isn’t that some sort of dodgy cryptocurrency?

Don’t get lost in the technobabble – blockchain is a confusing technology with a simple purpose: enabling groups that don’t trust each other to trade things or validate information without an all-powerful middleman. In a world where trust in institutions, including government, is declining, blockchain provides a useful way to create new systems to empower groups to work together and define what truth is.

So, no, the blockchain is not synonymous with cryptocurrency, but it is related to cryptocurrency in the same way that the first application of the internet was email.

The short geeky explanation of the most common form of blockchain tech (there are many longer explanations out there) is that blockchain creates a ledger or database to track information or transactions. The ledger is:

There are a million ways that *centralized* databases are used today, from tracking our credit information (Equifax) to personal data shared with the government (Office of Management and Budget) to buying concert tickets (Ticketmaster). Blockchain tech can permit new approaches to coordination and collaboration that could disrupt many businesses, including all the above. Huge amounts of investment have poured into the blockchain sector, but most of it has gone into financial technologies (FinTech, in the jargon). NDI believes it’s critically important to think about the social implications of these disruptive new systems, and ensure that democratic and human rights voices are at the table as this new infrastructure is constructed.

Information integrity is a particularly important aspect of blockchain-based systems. Anyone who can see the ledger can demonstrably prove that something was created by a certain person at a certain time in a certain way and if it has been altered. It’s easy today to modify text and make it look like it came from a legitimate source, but in the near future that will become true for audio and even video as well. How do know what’s authentic? One piece of the puzzle may be validation on a blockchain, as by a notary, of created information.

Governments are often in the business of being the trusted middleman on certain things – but that trust isn’t always upheld. In the Republic of Georgia, land titles have been put on the blockchain, ensuring that everyone is able to provably validate property ownership – and any modifications, including illegitimate tampering, are visible to all. Anything that has to do with licensing, registration, births, education, titles (i.e. lists of things, which government has a-plenty) can benefit from a system where no one can make changes without leaving the evidence, and no one can hack or destroy the whole database.

The blockchain isn’t the solution to everything – there are only a certain set of problems that really benefit from a secure, public ledger – but those that do will be looking at major disruption. The internet collapsed the cost of communications to almost nothing. Blockchain collapses the cost of validating information or transferring ownership to almost nothing. We don’t know what all that will mean for the future of democracy – after decades we’re still learning the implications of the internet – but NDI and our partners at the Blockchain Trust Accelerator will be working to figure it out.