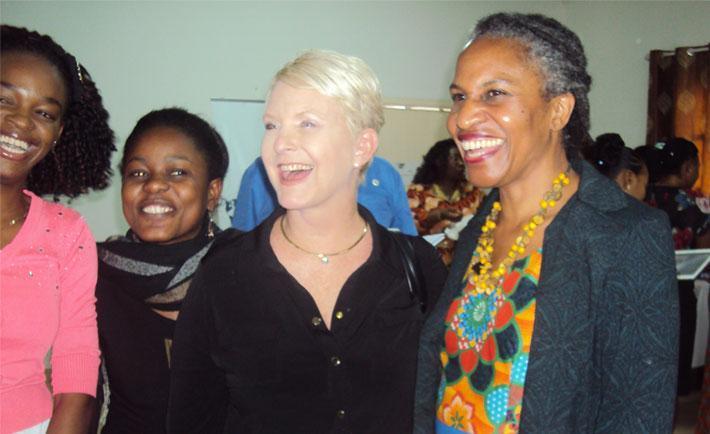 On July 8, the National Democratic Institute’s team in the Democratic Republic of the Congo (DRC) had the pleasure of hosting Cindy McCain in its Kinshasha office. McCain, a businesswoman, philanthropist and humanitarian, is also the wife of U.S. Senator John McCain, who chairs NDI’s sister organization, the International Republican Institute.

Mrs. McCain visited the country in her official capacity with the Washington, D.C.-based McCain Institute, a non-partisan organization that works with leaders around the world on issues related to security, economic opportunity, freedom and human dignity. The McCain Institute operates in North Kivu Province to promote free and fair elections.

Mrs. McCain asked to meet with a group of Congolese women politicians to discuss their under-representation in the country’s government as well as the difficulties they face in efforts to participate successfully in the political process.

Article 14 of the DRC constitution explicitly supports the “elimination of all forms of discrimination against women,” calling on public authorities to “ensure the protection and promotion of [women’s] rights.” Despite this strong language, women politicians still face significant challenges in practice, and those who met with Mrs. McCain shared their personal experiences. Drawn from participants in NDI programs, the politicians cited barriers to women running for office including lack of access to education, a cultural bias against women candidates and political parties that relegate women to minor roles.

NDI’s work with women in the DRC focuses on training them to develop strong political skills. Among other programs, NDI conducted a “campaign academy” on how to run for office, hosted training in communications technology and provided materials on local issues, so that the women could make a difference in their communities. Many who met with Mrs. McCain had participated in the National Endowment for Democracy-funded women candidates training program, which prepares women candidates for the country’s upcoming elections through intensive instruction on ethics, leadership, political campaign strategies and other electoral skills.

The Deputy Ministers of Budget and Interior and the Provincial Minister of Gender also shared their views and experiences about women’s political participation in the DRC with Mrs. McCain. While noting the progress that has been made over the years, they underscored the continued need to create a more inclusive political environment.

Before leaving, Mrs. McCain congratulated the group of participants and encouraged them in their quest to become the future leaders of the DRC.

Patrick Lembo
Patrick Lembo is a senior program assistant for NDI’s gender and youth programs in the Democratic Republic of the Congo.