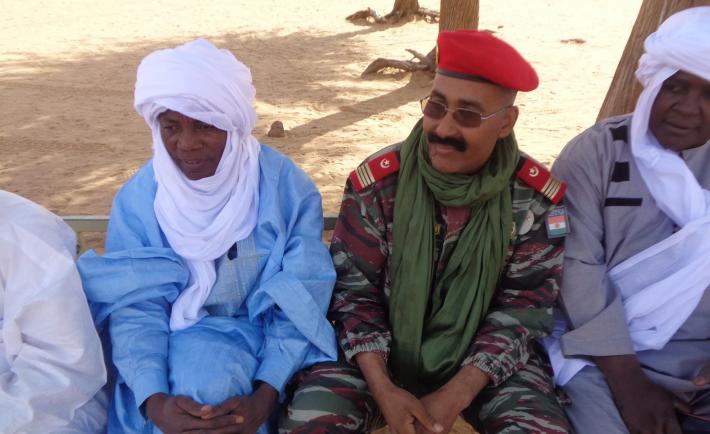 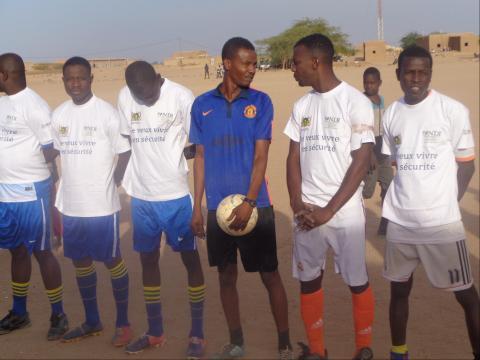 As a confidence-building measure, youth and security forces competed in soccer matches. Local youth here line up before the game in t-shirts printed the occasion, “I want to live in security; trust the Nigerien Security Forces.”
Prev Next

Northern Niger has long been marked by instability and tense relations between citizens and the government, including military forces. The Agadez and Tahoua regions, which harbor the country’s vast uranium resources and most important mining sites, have repeatedly experienced conflicts among traditional pastoralist societies, growing urban communities, mining companies, and central authorities over issues such as the use of land and water resources and the environmental impact of the mining industry.

These challenges have been exacerbated by an increasingly volatile security situation in the Sahel -- an arid region of Sub-Saharan Africa south of the Sahara desert. At the crossroads of century-old trade routes, Agadez has become a center for the trafficking of migrants to Europe, arms and drugs. Since the eruption of Mali’s armed conflict and increased incursions of Islamist terrorists into Nigerien territory, the government of President Mahamadou Issoufou has stepped up the presence of military forces in the north. Meanwhile, many citizens feel disenfranchised and frustrated over what they perceive as the government’s failure to provide basic services.

Prior to Niger’s February 2016 legislative elections, NDI organized a series of forums where citizens discussed the priorities in their communities with political parties and their local candidates.

The forums and ensuing meetings revealed increasing tensions between Niger’s military and the population in the area. Citizens and traditional leaders complained that the authorities failed to address the military's transgressions -- such as random arrests, corruption, and intrusive checkpoints on roads -- leading to deteriorating relationships. NDI organized another set of forums from January 1 to 10, 2017 to address this deterioration of trust. Through improved dialogue, the sessions sought to increase mutual understanding of shared security threats, foster communication and prevent an escalation of conflict. Representatives from all key groups with a stake in the discussion attended each forum, including citizens, government officials, members of the security forces and political parties, and traditional leaders. The forums also included a civic education component to inform local populations and security forces about their rights and responsibilities under the constitution and specific Nigerien legislation.

During the forums, citizens discussed their communities’ priorities, including addressing insecurity and the need for youth employment as a productive alternative to violence. Security forces shared information about how to directly report security incidents and reassured citizens that informants would remain anonymous.

The forums also highlighted existing barriers for communication, including a history of distrust between citizens and Nigerien armed forces and the lack of cellphone infrastructure in some regions, which hinders timely reporting of incidents to security forces.

"It is time to trust the Defense and Security Forces (FDS),” said Mohamed Anacko, president of the Agadez Regional Council. “Yesterday, we were fleeing the FDS. Today, we must work together to preserve peace and security in the region in the face of enemies unknown to all." Anacko was a combatant in the 2012 Taureg rebellion who has since traded in his weapons for politics.

As the result of one of these forums, the governor of Agadez pledged that he would bring two mobile networks to Tchintaborak, a locality in the region of Agadez. The forums gathered hundreds of people in each locality and helped them address some of their security concerns and create an environment less conducive to the spread of violent extremism across northern Niger.

Discussions in several localities were followed by soccer matches between security force members and the population to further strengthen friendly relations. The forums were attended by hundreds of people in each locality and were perceived by participants as a contribution to increasing security and creating an en environment that is less hospitable to the spread of violent extremism across northern Niger.

To ensure the sustainability of these efforts, NDI facilitated the creation of a consultation mechanism that will meet monthly to share information, identify and mitigate potential conflicts in the region and identify ways to improve the citizen-security forces relationship.

The work in Niger is just one example of NDI’s efforts to help local communities come together and find solutions to radicalization and extremism. These efforts focus on underlying political dynamics and foster pluralism and public trust in governing institutions. As communities learn to work together and practice democratic behaviors, they become more resilient and able to challenge negative forces. NDI will continue to apply this approach a means to prevent extremism and advance development.