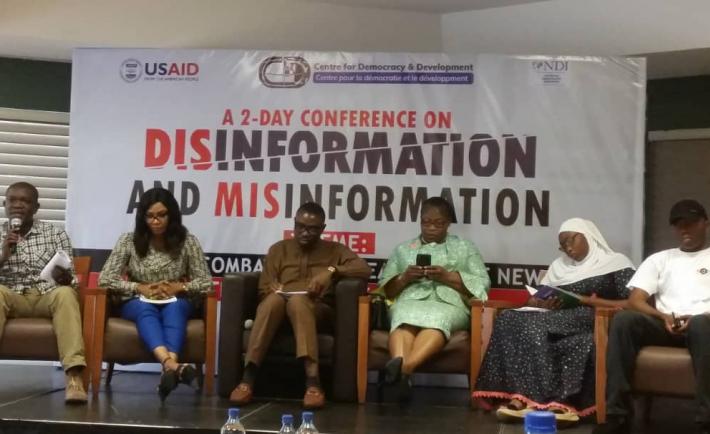 In February 2019, Nigeria went to the polls to elect its President, Vice President, House of Representatives and the Senate facing an exponentially growing volume of news and online information about the election and various campaigns, particularly of President Muhammadu Buhari and his challenger, Atiku Abubakar. As information access grows online, Africa’s largest democracy is also facing a rising wave of disinformation, hate speech and computational propaganda used by candidates and their supporters to win elections, attack opponents, and weaken faith in democratic institutions - and the democratic process overall.

Supported by USAID’s Electoral Empowerment for Civil Society Program, NDI worked with local partners in Nigeria at the Center for Democracy and Development to outline what happened online during the election and identify solution driven responses through fact checking, media literacy and research into the online environment. This resulted in a new report published by CDD: “Sorting Fact From Fiction.” The findings of the report were presented at the two-day “Conference on Combating Disinformation and Misinformation” in Abuja. The report highlighted issues related to false and inflammatory content plaguing Nigerians and people all over the world. At the event, representatives from NDI, CDD and other organizations discussed issues related to false content, hate speech against women and ethnic groups, and media literacy.

Internet penetration in Nigeria is rapidly increasing as the rate of Nigerians with access grows exponentially. More people are getting online through their cell phones, and social media networks like Twitter and Facebook are becoming increasingly popular. According to the Nigerian Communication Commission, over half of Nigeria’s 190 million citizens now have access to the Internet.The messaging service WhatsApp is also very popular, and while it is not a public facing social network, comprised of closed member groups often made up of family and friends, it has become a medium for political campaigns and their allies to reach audiences. Research completed by CDD in collaboration with international researchers from the University of Birmingham, supported by WhatsApp, showed the prominent role that closed messaging system played in the election, used by campaigns and ordinary users to spread both truthful and false information.

NDI has been working with CDD to spread awareness about disinformation issues through fact checking, particularly on WhatsApp, that it shares online through its website, Twitter and Facebook profiles. Various fact checks CDD published during the 2019 national election campaign and afterwards found stories circulating about a possible invasion of the country, a Presidential body double and various false stories and content, often featuring violence and confusion at the polls. Besides attacks and supportive messages about candidates and parties, these disinformation campaigns often target the institutions of democracy itself, weakening confidence in them and trust in the election and the bodies that govern it. CDD continually monitored social media for fact checking and research that contributed to their reporting, and set up an Election Analysis Center for real time monitoring and public information on social media on election day itself.

This became a particular concern because the elections were  delayed due to logistical issues. As a result, confusing messages and conspiracy theories grew louder still. Ultimately President Buhari won election by over three million votes, but the challenges of the campaign were vividly illustrated as the National Democratic Institute and the International Republican Institute’s Joint International Observation Mission “concluded that the 2019 elections did not meet the expectations of many Nigerians” due to the delays and challenges to the administration of the vote which “undermined public confidence in the Independent National Electoral Commission (INEC).” These issues were reflected in the online space, as disinformation and misinformation about the delay and acts of violence were spread on social networks and messaging platforms.  Disinformation, false information shared with intent to deceive, would often be spread, while ordinary users and voters then received the false stories and shared misinformation without knowledge of its deceitful content.

NDI’s final report on the general election also revealed that the stakeholders the mission spoke with “expressed concern over the levels and role of disinformation in the elections in the pre-election period.” The report also highlighted research conducted by CDD and NDI that found “websites and social media profiles of legitimate civil society organizations, observation groups and media outlets were cloned or hacked, and then used to spread disinformation to audiences who believed they were consulting trusted sources.” These sites, major fact checks, disinformation campaigns, and other aspects of the online landscape during the election are detailed in CDD’s new report “Sorting Fact From Fiction,” which also features a survey of public Nigerian Facebook groups and Twitter accounts, the content they promoted, and their conversations.

New gubernatorial elections in the Kogi and Bayelsa states for governor will take place in November, and NDI is working with CDD to extend its approach from the general election, while keeping tabs on the broader Nigerian online landscape to develop new national level research in the future. CDD and NDI are developing trainings for local fact checkers, local election analysis centers, as well as awareness raising events such as this week’s conference for high level stakeholders in parties, INEC representatives, media, and civil society. These events will focus on media literacy, disinformation and other problematic content to explain how the online space increasingly influences civic discourse and political processes there. NDI will continue its collaboration with CDD as part of its global INFO/tegrity initiative to promote information integrity, support local partners in their efforts to understand their digital national contexts, train others and spread knowledge on these critical issues to counter negative online speech, and ultimately contribute to a more positive information environment for democracies globally.