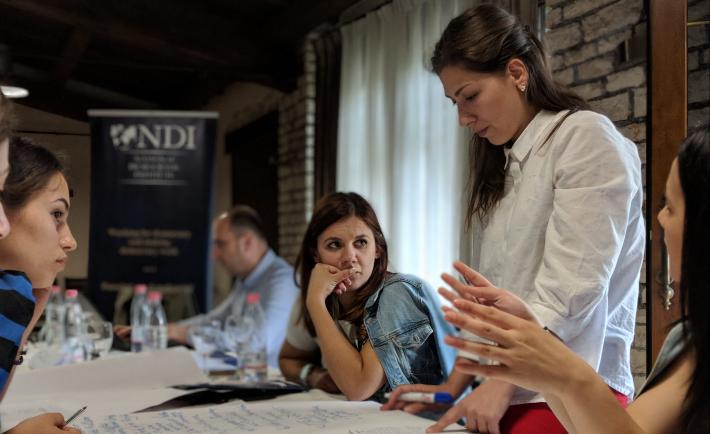 Youth from Albania develop action plans to address issues in their local communities during an NDI skills-building workshop in Durres on June 29, 2018. Credit: Dana Radojevic

It is easy to get lost in the details of one’s work. This happens in every field ranging from the neverending rounds made by a nurse to the countless strokes of an artist’s paintbrush. Supporting democracy and good governance is no different – thousands of dedicated activists across the world spend their days, nights and weekends lost in paperwork, meetings and strategy sessions, working to create a more inclusive, just and democratic world.

Occasionally, and understandably, we all fail to see the bigger picture of our work, but fortunately for those at NDI, the International Republican Institute and other like-minded organizations, The Economist Intelligence Unit’s annual Democracy Index provides an opportunity to take a step back from our work and reflect on broader trends from the 10,000-foot view. The index is based on five categories: electoral process and pluralism, civil liberties; the functioning of government; political participation; and political culture. Each of the 165 countries is evaluated and subsequently assigned a score and classified as one of four regimes: “full democracy,” “flawed democracy”, “hybrid regime,” or “authoritarian regime.”

The most notable accomplishment of 2018 was the halting of the so-called global “democratic backslide.”

2018 was exceptional on many accounts: the most powerful year of the woman to date, France’s return to football stardom and the success of a predominantly black superhero cast at the global box office. I would argue, however, that the most notable accomplishment of 2018 was the halting of the so-called global “democratic backslide.” According to the index, for the first time in three years, global democracy scores remained stable. Incremental changes were finally realized, resulting in large-scale improvements in some countries, such as Costa Rica’s upgrade from “flawed democracy” to “full democracy.” Nascent democratic movements found their roots in the Gambia with the president’s actions to promote media freedom and in Ethiopia where political prisoners were released. Canada, of course, remained one of the world’s most-stable, pluralistic and inclusive countries.

In an era of disillusionment with democracy and the prudence of global institutions, small-d democrats around the world checked their reservations, put aside their fear of retaliation and engaged at an unprecedented level. Beginning in 1983, when NDI was created, we vowed to never let our partners act alone. Through programming that aims to empower citizens to pursue their democratic dreams in their countries, NDI has joined activists in every corner of the globe.

Over the years, NDI has worked in 156 countries and territories, fielded over 200 international election observation missions, and worked with over 28,500 local partner organizations. NDI will continue its work in countries on either end of the Democracy Index spectrum, believing steadfastly that all people deserve to engage in a participatory, inclusive, just and democratic system of government, and that democracy will always be a work in progress.

Democracy may not have ended history, as Francis Fukuyama once suggested, but it has positively, demonstrably impacted the lives of millions across the globe. So, next time you’re lost in the details or pessimistic about your impact, don’t forget your efforts make a tangible, positive difference – even if you cannot directly see it.