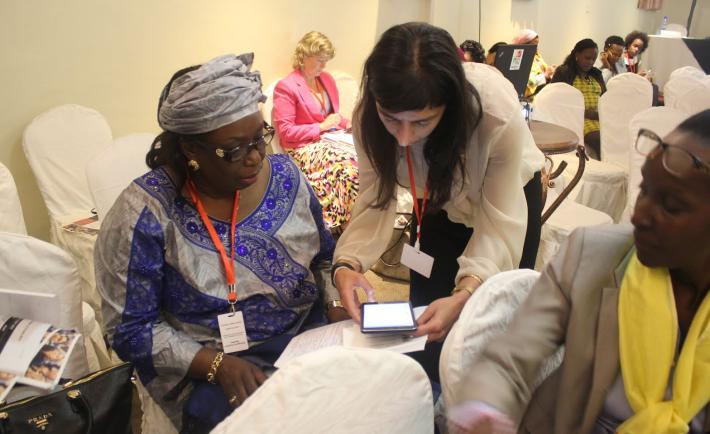 “On point” is how Giovanie Biha, deputy executive secretary at the United Nations Economic Commission for Africa (UNECA), described NDI’s recent, co-convened side event for female parliamentarians at the United Nations’ Third International Conference on Financing for Development (FfD) in Addis Ababa, Ethiopia. With UNECA’s Africa Gender Centre and the Women in Parliaments Global Forum (WIP), NDI organized a panel on July 13, on the role of parliamentarians in using “domestic resource mobilization” to advance gender equality as part of the Post-2015 Development Agenda.

Domestic resource mobilization refers to the use of a country’s public and private funds - including tax revenues - to finance development goals. Globally, significant domestic resources that could be spent to support gender equality and empowerment are lost every year through corruption, corporate tax evasion and inefficient tax collection systems.

The event was an important step toward the development of a toolkit to support parliamentarians in their role securing the resources that will be required to achieve the new Post-2015 Sustainable Development Goals (SDGs), which are due to be adopted at the United Nations in September. The SDGs include an increased focus on gender equality and women’s empowerment, and their implementation will require an increased focus on domestic resource mobilization, as well as renewed international cooperation on development.

All of the panelists agreed that parliamentarians have a key role in meeting these goals, and called on them to use their mandates to ensure that future budget allocations reflect their countries’ commitments to achieving the empowerment of women and girls. The panelists also acknowledged that much of the democracy and development community has failed to live up to its commitments in this area.

In addition to the ongoing domestic resource discussion is the recognition that tax systems must be accountable to all citizens and tax revenue must be leveraged to fund both social services and development. Tax systems can perpetuate gender inequality, so much so that Diop said that progress on gender equality would not move forward unless finance and tax systems are unpacked and screened for gender bias. Grown said that Value Added Tax (VAT) illustrates this point. While often used as easy revenue raisers, VAT disproportionately burden the poor - most of whom are women.

Speakers called on legislators - described by Grown as “the frontline of the contract between citizens and government” - to play a greater role in promoting accountability, transparency and justice within the tax system. McAvan emphasized that trust between parliamentarians and citizens is a fundamental principle of taxation. “Women and girls must feel the difference this trust can make in their lives,” she said.

Fraser-Moleketi spoke from the perspective of a former parliamentarian and member of three consecutive presidential cabinets in South Africa, and reminded parliamentarians of the vast disparity between Africa’s improved tax takes and the cost to the continent of illicit financial flows. Both needed to be on their radars.

Financing for gender equality was a top theme in Addis, and featured in the opening paragraph of the Addis Ababa Accord Outcome Document. At least nine side events were dedicated to it, including one with UN Secretary General Ban Ki-moon and World Bank President Jim Yong Kim. There is hope that the momentum from the conference will translate into real influence and deliver the money that is necessary to address the funding gaps that persist between the commitments and actual costs of achieving the gender equality and women’s empowerment envisioned in the SDGs.

However, it’s hard not to be skeptical. As McAvan said, “You’ll see a lot about women and gender, including in the first paragraph [of the Addis Ababa Accord], but I wonder, how many references to gender have we adopted before?”

Layla Moughari
Layla Moughari is the gender monitoring and evaluation program officer on the Gender, Women and Democracy team at the National Democratic Institute.
Connect with the author
Twitter