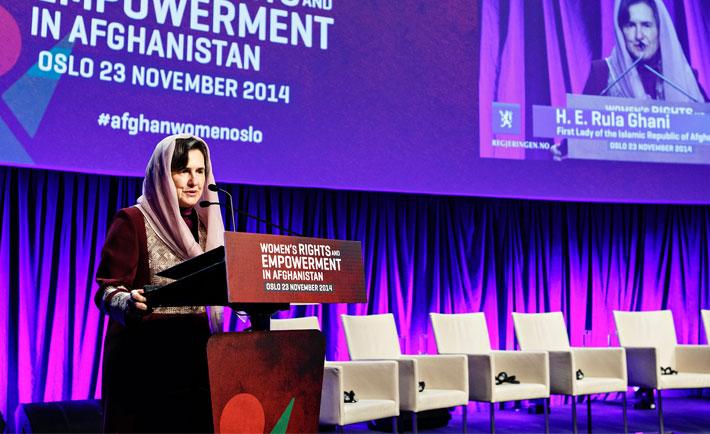 In the last 30 years, Afghanistan has emerged from Soviet occupation, fallen into a crippling civil war, and faced brutal and oppressive rule by the Taliban. During this violent period, women were barred from public life. They were prohibited from working, banned from running for political office, and even shot for attending school. But since the fall of the Taliban, Afghanistan’s women have made significant strides for equality.

During last year’s presidential election, Mrs. Rula Ghani, wife of the current president, Ashraf Ghani, took an active role in her husband’s campaign and was the only candidate’s wife to appear in public.

Mrs. Ghani will speak at NDI’s Madeleine K. Albright Luncheon in Washington, D.C., on Tuesday, May 12, where she will talk about the opportunity Afghan women now have to strengthen their voice in shaping their country. At the luncheon, NDI will award the Madeleine K. Albright Grant to the Worker Women Social Organization (WWSO) of Kandahar, Afghanistan.

Born and raised in Lebanon, Mrs. Ghani received her degree from The Paris Institute of Political Studies in France. She went on to receive a master’s degree in political studies from the American University in Beirut, where she met her husband. They married shortly after she received her degree. Mrs. Ghani then went to the United States, earning a second master’s degree in Journalism from Columbia University. She is a long-standing champion for women’s rights.

In his inaugural address, President Ghani said, “I deem it necessary here to thank my dear wife and life partner, Ms. Bibi Gul, for her continued support of me and Afghanistan,” referring to Mrs. Ghani by her Afghan name. “Bibi Gul has always supported Afghan internally displaced persons, women and children, and I am sure that she would continue this voluntarily in the future as well.”

Mrs. Ghani was clear that she would play an active role in supporting Afghan women and girls as they work to find their political voice. "I would like to give women [in Afghanistan] the courage and the possibility to do something about improving their lives," she said in an interview with the BBC’s Sana Safi.

She is dedicated to advancing women’s role in the workforce and improving the welfare of all Afghans through education.

To attend the luncheon, please register here. To help support NDI’s work with women and girls around the world, contribute here.

Alex Stein
Alex Stein is a development assistant at the National Democratic Institute. He completed his bachelor’s degree in politics from Occidental College in the Spring of 2014.
Connect with the author
Twitter
NDI