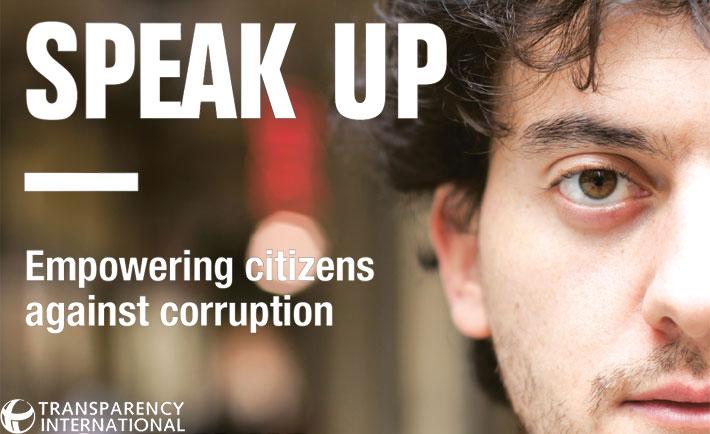 The strength of democracy not only varies vastly across countries and regions but can also change rapidly. Political space may open or close, citizen voices can be amplified or silenced, and governments might grow more or less accountable. NDI operates successfully in these changing environments in part by leveraging available knowledge to implement the most innovative and relevant programmatic approaches. As practitioners and researchers develop new theories and techniques to guide international development, NDI’s Citizen Participation team shares these publications with Institute staff. The resources shared last month demonstrate approaches to strengthening democracy through fighting corruption, thinking and working politically, improving service delivery and increasing fiscal transparency.

Find below the June 2015 digest of quality citizen participation resources.

Speak Up: Empowering Citizens Against Corruption, a report by Transparency International, highlights some key challenges to tackling corruption, including lack of access to information, insufficient statutes, inefficient channels for citizens to speak up about abuses, and institutions that lack public trust or the capacity to address complaints. Using examples from seven European Union countries, the report showcases effective ways to help individuals take a stand against corruption. The highlighted approaches aim to empower citizens so they can increase pressure to reform institutions.

Improving Development Aid Design and Evaluation from the Carnegie Endowment for International Peace argues that effective development programming must be designed, implemented and evaluated with an understanding that development is inherently political and nonlinear. Complexity theory claims that social and political life happens in a complex system in which actors are interdependent. Development that uses complexity theory engages politics and sees change as systems-based and context dependent. The main questions for program implementation are not about just what to do but how to do it at a particular time, in a particular political context and against a particular opposition.

Trust, Voice, and Incentives: Learning from Local Success Stories in Service Delivery in the Middle East and North Africa, a report from the World Bank Group, analyzes the relationship between quality service delivery, citizen engagement and government accountability. The report develops a conceptual model that defines a “cycle of performance” to explain this relationship and highlights case studies from Jordan, Morocco and the West Bank. The cycle of performance can explain both positive and negative performance. On the negative side, when institutions fail to deliver adequate services and are not accountable to public demands, citizens lose trust in them. Consequently, citizens are less engaged and service delivery is further diminished. To overcome this cycle, solutions should emerge from an incremental, problem-based learning process. Reforms can then create a positive performance cycle: as service delivery improves citizens gain trust in institutions, which reshapes the nature of their engagement and performance continues to improve.

Surmounting Obstacles to Fiscal Transparency by the Global Initiative for Fiscal Transparency explains that effective fiscal transparency requires 1) organized release of information; and 2) clarity about what constitutes legitimate government withholding of information. Free-for-all release of information is often inaccessible, unusable or difficult to understand. The report outlines eight obstacles to effective transparency and ways for key actors -- such as CSOs, legislatures, oversight institutions and the media -- to tackle these obstacles, emphasizing the importance of buy-in from diverse actors. Ultimately, these organizations serve as intermediaries, interpreting and disseminating information for the benefit of citizens.

Click here for an archive of past resource digests.

Jenny Tumas
Jenny Tumas is the project assistant for the National Democratic Institute’s citizen participation team. She is currently a master’s degree student studying political science at the University of...
Connect with the author
Twitter
LinkedIn
NDI