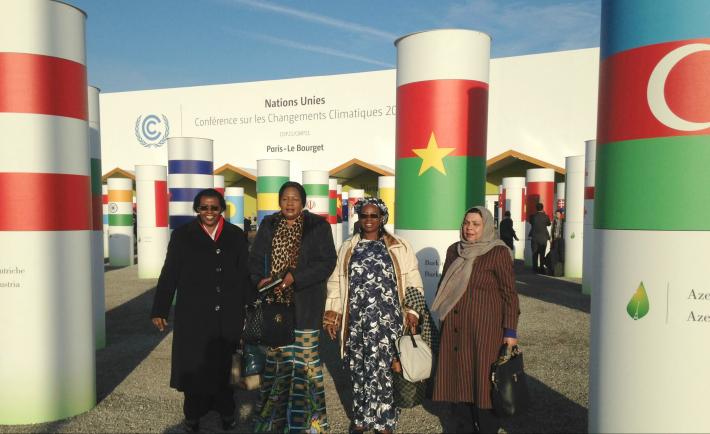 After two weeks of intense negotiations at the 21st meeting of the United Nations Framework Convention on Climate Change (UNFCCC) Conference of Parties (COP21) in Paris, France, 196 nations each committed to a series of practical steps they will take to limit the rise in global temperatures to below 2°C. Though the entire planet will benefit from the agreement,  it will have a particular impact on the lives of women and girls across the globe who are disproportionately affected by dramatic changes in climate due to social and cultural norms, the gender division of labor, and higher dependence on local sources of wood and water.  Extreme weather events are also much more dangerous for women and girls. Women comprised about 70 percent of those killed by the 2004 Tsunami in the Indian Ocean, and 61 percent of the 140,000 people who died in the 2008 cyclone in Myanmar.

But while many millions of women and girls bear the burden of the impact of climate change, they are also involved in a range of environmental activism at all levels. A key element of the success of the COP21 deal will involve harnessing the potential of their collective action.  The example has long been set by women like the late Wangari Maathai, who as an activist opposed government policies on the environment in Kenya, before going on to become a member of parliament herself and winning a Nobel Peace Prize for her Greenbelt Movement.  As UN Women’s Deputy Executive Director Lakshmi Puri said: “If this climate agreement is to have any impact it must resolve to provide the required ecosystem of law, policy, institutions and investment to involve women, including young women, in the design and execution of climate action and decision-making.”

This is as true of global summits as it is of national legislatures, local governments and district councils. While there has been some improvement, the representation of women at high-level dialogues remains very low. Within the UNFCCC framework, the need to improve women’s representation was recognized as early as 2001 at COP7 in Marrakesh. An analysis of delegations at UNFCCC meetings shows that women’s representation ranges from 36 to 41 percent within delegations, dropping to 26 to 33 percent at Heads of Delegation level. Additionally, only one of the five authors of the 2014 Intergovernmental Panel on Climate Change (IPCC) Fifth Assessment Report was a woman, and only eight out of 34 chairs at the IPCC are women. Two 2014 Media Matters assessments found that 85 percent of experts quoted  in the media about climate change are men.

To respond to the general challenge of women’s political engagement at the global level, NDI is implementing USAID's Global Women's Leadership Program (GWLP), which supports women in transitional and conflict-affected countries to participate in peace processes and high-level global forums. Working with the Brussels-based Women in Parliaments Global Forum, NDI organized the first of three GWLP delegations including women parliamentarians from Afghanistan, Burundi, Cote d’Ivoire and Uganda to participate at various events at COP21. Speaking at a panel on Promoting an Integrated Response for a Just and Sustainable Development on COP21’s Gender Day, the Ugandan MP and member of the East African Legislative Assembly on the GWLP delegation, Margaret Zziwa, outlined the climate change challenges that women and girls in East Africa face. She also drew from her experience as a national and regional parliamentarian to articulate the role that legislators can play in promoting policies to address climate change at the national level.

One of the GWLP program’s key objectives is to encourage long-term engagement with climate change issues once the women parliamentarians return to their home countries.  This can be done in a range of ways: by participating in debates, joining parliamentary committees, or working with civil society activists on the implementation and accountability for COP21 pledges. To this end, the GWLP delegation’s schedule in Paris included a one-day workshop on Gender and Climate Change organized by NDI and facilitated by the CEO of the Global Legislators’ Organization for a Balanced Environment (GLOBE International), Malini Mehra. The workshop focused on message and advocacy campaign development for national and international dialogue on climate change. NDI also welcomed women parliamentarians from other delegations to the workshop. The GWLP delegation also participated in the GLOBE COP21 Summit and the UNFCCC’s Gender Day, and were able to meet with high profile personalities such as Catherine Coutelle, Chair of the French Parliament’s Gender Committee. Next year, NDI will organize GWLP delegations to participate in the  World Bank Group Fragility, Conflict and Violence Forum in Washington DC, and in the final preparatory conference in Jakarta for the UN’s Habitat III global summit, which will focus on achieving “a better urban future.”

NDI is committed to empowering women to influence the debate on one of the most important challenges we face: the dramatic impacts of climate change as well as its disproportionate impact on women and girls.

Besa Rizvanolli
Besa Rizvanolli is a Senior Program Assistant on the Gender, Women, and Democracy team at NDI.
Connect with the author
LinkedIn