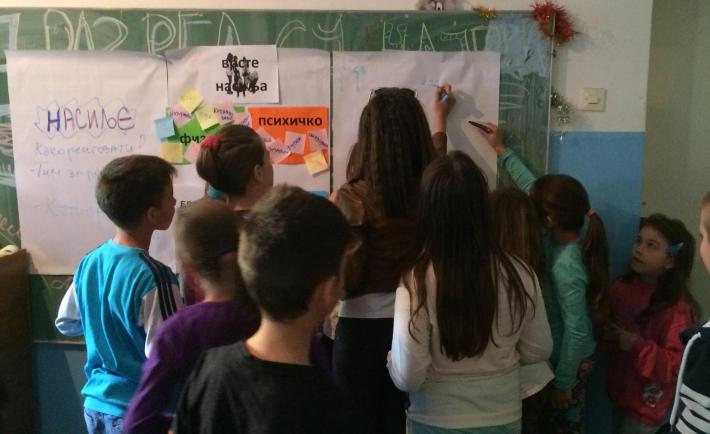 Students in Zvecan, Kosovo, brainstorm ways to stop school bullying, as part of a community initiative started by YLP participants. 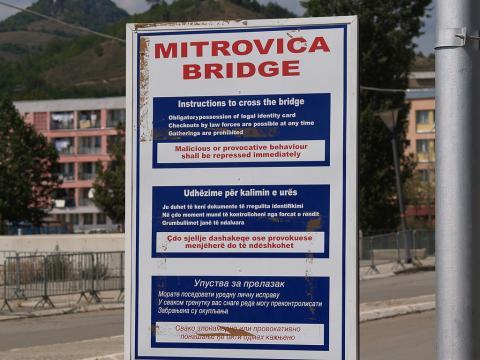 A sign at the entrance to the Mitrovica bridge, which crosses the Ibar River dividing the ethnic Serb and ethnic Albanian communities, warns travelers that “malicious or provocative behaviour shall be repressed immediately.” Credit: Dave Proffer

Vladimir had not crossed the Mitrovica bridge -- which divides ethnic Serb communities north of the Ibar River from ethnic Albanians to the south -- in three years. But in February last year, Vladimir had a reason to cross the bridge and travel south: the opportunity to attend an NDI training in Gracanica with 19 other minority youth leaders and become a stronger advocate for issues in his community.

Vladimir and his colleagues are members of the most recent generation of NDI’s Youth Leadership Program (YLP). YLP is one of NDI’s cornerstone programs that develops political leadership among ethnic Serbian youth in northern Kosovo. After a 2013 agreement with Serbia, these northern communities came under Kosovar administration, but opportunities for political activism have been limited, and few youth participate in political processes.

Vladimir joined YLP full of ideas for his community. For example, he and his peers could establish an association of youth interested in information technology, sharing knowledge and experiences throughout his region of Kosovo. “This opportunity would help me establish direct contacts with NGOs and others important to my idea,” he said.

When these emerging leaders come together, they first undergo a series of trainings on advocacy skills, such as:

Training modules introduce participants to national and local political processes, and the roles of civil society, parliament, media and government.

After initial training, Vladimir and other YLP participants will work as a group to identify top concerns in their community through research and public surveys. Then, the group will design and implement advocacy campaigns to address the priority issues they identified. Throughout this process, NDI serves as a mentor and resource.

While Vladimir’s group is still in the training stage, other groups have sparked change in their communities over the past three years. In Leposavic, a small town in Kosovo’s northernmost district, old CDs, juice bottles, boxes and other unneeded items were turned into beautiful public art pieces by YLP participants who formed the “Eco-Savic” initiative -- a play on the words "ecological" and “Leposavic." When citizens come to view the recycled art, the group shares their message about the importance of recycling and environmental protection.

For one Eco-Savic group member, Sanja, being part of this initiative enabled her to raise awareness around these two issues, which she says had been unaddressed by either the local or national government.

The city lacks a proper city disposal area, but members of Eco-Savic advocacy group are taking action. They have worked to influence local authorities, raise awareness of the need for recycling through theater and promotional materials, and organize volunteers to clean-up the city. They also gathered government officials and civil society representatives for a panel discussion to form recommendations and make proposals for further action.

In the neighboring municipality of Zvecan, high numbers of traffic accidents and fatalities due to poor signage and road design are a widely held concern. A YLP traffic safety initiative succeeded in getting traffic signs and road bumps placed near schools, and brought in police officers to speak with students about safe pedestrian habits. Vladimir and Sanja are two of 70 YLP participants who have engaged 1,200 more citizens and officials from four municipalities on important community issues such as traffic safety, preventing bullying, and freedom of movement for people with disabilities.

Sanja says that, through her participation in YLP, she learned “what advocacy can do to improve the causes we believe in.”

Editor’s Note: With funding from the U.S. Agency for International Development (USAID), NDI has implemented the Youth Leadership Program in North Mitrovica since 2013. Learn more about NDI’s work in Kosovo here. Nikola Djakovic, a senior program officer based in North Mitrovica, and Elizabeth Saam, a senior program assistant based in Washington, D.C., also contributed to this post.