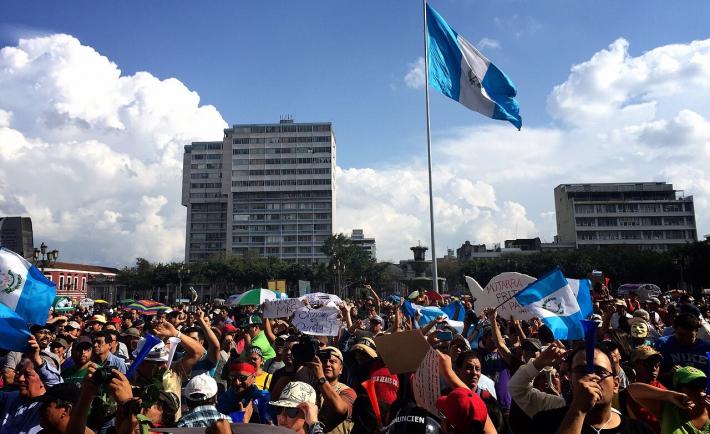 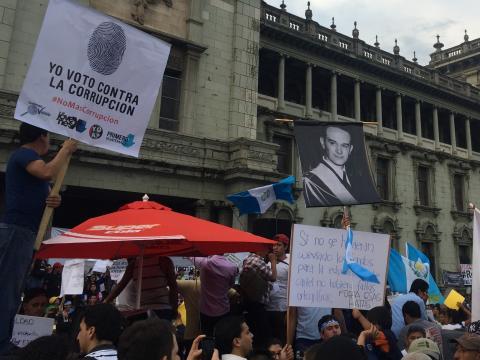 A protestor holds a sign that says "I vote against corruption." Credit: Ricardo Marroquin 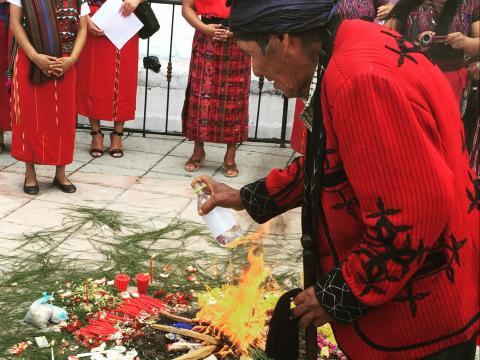 An indigenous leader takes part in a traditional Mayan ceremony in Nebaj, Quiche at the launch of a citizen observation on electoral violence. Credit: Sara Barker
Prev Next

Guatemala is a country on the brink. At one point, some considered the country to be on the brink of being a failed state. In recent years, Guatemala has made headlines with bleak statistics illustrating the range of challenges it faces: the country suffers from the fifth highest homicide rate in the world, drug trafficking and narco money have penetrated society, child malnutrition is the worst in the hemisphere, and the state institutions responsible for providing services to Guatemalan citizens are notoriously weak and corrupt. Although those challenges still exist, Guatemala is now stepping back from the brink toward a much brighter future, brought about by citizens demanding more from their elected leaders.

It began on April 16 when the United Nations-backed International Commission Against Impunity in Guatemala (CICIG) and the Guatemalan Attorney General’s Office (Ministerio Publico) uncovered a massive corruption scheme that involved high-level government officials. The criminal network, known as La Linea (after the hotline used in the scheme), involved public officials charging importers bribes in exchange for lower import taxes, defrauding the country an estimated $120 million in tax revenue. The Ministerio Publico arrested 22 people in connection with the scheme. This is only one of the major corruption scandals uncovered by CICIG and Ministerio Publico in recent months.

Although both President Otto Perez Molina and Vice President Roxana Baldetti denied their involvement, top officials and cabinet members began resigning in protest, including the candidate for president from their own party. Baldetti, the first female vice president, resigned on May 8 in response to peaceful protests. She was arrested and indicted shortly thereafter and is currently awaiting trial in prison. Alejandro Maldonado was selected by Congress and sworn-in as her successor.

The protest movement gathered steam throughout the summer, with thousands of Guatemalans continuing to gather peacefully every Saturday in the Central Plaza in Guatemala City and other cities throughout country, united in their call for Perez Molina’s resignation and demanding accountability, an end to corruption and impunity, and reforms to the laws that govern elections and political parties.

On August 21, CICIG and the Ministerio Publico released evidence that implicated both Baldetti and Perez Molina in the La Linea scandal. On August 27, civil society organizations called for a national strike, demanding that the president step down and be stripped of his immunity from prosecution. That night, Perez Molina again refused to step down.

A five-member congressional commission subsequently recommended that Perez Molina be stripped of his presidential immunity. The Guatemalan Supreme Court then ruled in favor of allowing impeachment proceedings. On September 1, all 132 members of Congress present (out of 158), including members of his own party, voted unanimously in favor of removing the president's immunity. Although he maintains his innocence, Perez Molina resigned and now also awaits trial from prison.

Vice President Alejandro Maldonado was sworn in as president and Congress selected Juan Alfonso Fuentes Soria as the new vice president. The two will serve through mid-January, when a new administration is sworn in.

The events around the corruption scandals moved quickly in a country where justice can be painfully slow or not come at all. Impunity is entrenched -- it has been estimated that less than 2 percent of the crimes reported to the Ministerio Publico result in convictions and sentences. Elected officials, who have formal immunity from prosecution, have long been protected. However, the events of the past few months have demonstrated that the tide might be turning on impunity.

It is clear that none of this would have been possible without consistent pressure from civil society groups. The fact that the protests remained peaceful provided legitimacy to the movement and may have helped prevent the government from responding with force. The protests were also historic in that they brought together tens of thousands of citizens all socioeconomic and political classes. Guatemala is often referred to as being divided between those that live in the capital and the rest of the country, but the national strike included universities, schools, businesses, unions, indigenous groups and social movements from across the country. These groups came together around common causes that impact the entire country -- an end to corruption and impunity, reforms to the political and electoral system, and the resignation of the president.

In this context, the elections were held as planned on September 6, but there was considerable uncertainty as to how the day would develop. During the protests, many groups had called for people to abstain from voting, or cast blank or invalid “null” ballots, as a form of protest. Would people participate? Would there be high levels of violence, as has been the case historically?

Despite these concerns, a record number of Guatemalans, approximately 70 percent of those registered to vote, cast ballots in a largely peaceful electoral process. In addition, only about 9 percent of the votes cast were blank or null, below levels in the last election in 2011. In what was probably the biggest surprise of the day, the “outsider” candidate Jimmy Morales, a well-known comedian and political newcomer who ran on the slogan “Not Corrupt, Not a Thief,” won the first round with 23 percent of the vote, although fell short of the 50 percent required to avoid a runoff. On election night, second place was essentially a tie, but once the votes were counted, it became clear that former first lady Sandra Torres had edged out Manuel Baldizon of the Lider Party. Baldizon dropped out of the race, alleging fraud but conceding he had no proof of the allegation. Torres will now face Morales in the runoff scheduled for Oct 25.

In most of the polls leading up to the elections, Baldizon was the frontrunner, and as the runner-up in the previous elections his victory was widely considered a foregone conclusion. In Guatemala, historically the runner-up from the previous elections ends up winning the following elections. Baldizon’s failure to make it to the second round was a historic break in this pattern of succession. In addition, Baldizon’s Lider Party is projected to have spent more than double the campaign spending limit on publicity alone, and nearly half of spending by all competing political parties. For elections to truly be fair and transparent in Guatemala, the system for regulating campaign spending will need to be overhauled. But the fact that the candidate who spent the most money and was widely considered to be presumptive winner did not make it to the second round sends a clear message from the Guatemalan people: “our vote cannot be bought.”

Underrepresentation of women and other historically marginalized groups in politics is another challenge. While the numbers on the percentage of women who voted has not yet been published by the Supreme Electoral Tribunal (TSE) for 2015, women’s participation rates have increased steadily since 1985 with women making up 53 percent of the voters in 2011. However, higher  participation rates have not been reflected in a higher number of women elected as representatives. In 2015, only 20 of 158 representatives elected to Congress were women. There are signs of progress, however. One of those women identifies as a lesbian, marking the first time that the LGBTI community will have representation in Congress, and Torres is the first woman in Guatemala to compete for the presidency in the second round. The TSE does not measure participation rates by indigenous communities, who are by some estimates the majority of the population. However, the election observation coalition Mirador Electoral noted high levels of indigenous participation, but also that 68 percent of voters were unable to participate in their first language. Participation does not equal representation, and -- just like women -- indigenous communities are also not well represented in elected office.

The citizens of Guatemala have shown that they are ready for change and that they will work for that end. Many will tell you “we are no longer afraid.” In a country where people lost their lives for voicing their opinion during 36-years of internal conflict, this is significant. People are more willing to tell you what they think, what they feel, what they want for their country. It is truly a country on the the brink of change.

According to the Americas Quarterly social inclusion index, which ranks countries across variables that look at an individual’s capacity to enjoy a safe, productive life irrespective of race, ethnicity, gender, physical or mental disability, or sexual orientation, Guatemala ranks near the bottom on most indicators. However, the one indicator in which they rank in the top three is civic participation. Now is a critical moment for Guatemalan civil society. As organizations seek to address problems that have long afflicted this nation, they need and deserve our support. And it can only be done if all sectors of society -- urban and rural, men and women, youth, indigenous and the LGBTI community -- are included in the process.