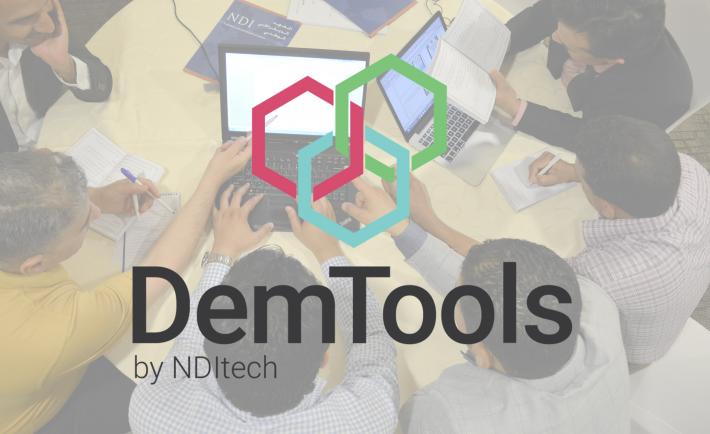 Since 2014, hundreds of governments, and civic and political organizations have used DemTools, NDI’s democracy toolkit.

Since 2014, hundreds of governments, and civic and political organizations have used DemTools, NDI’s democracy toolkit. DemTools is an open-source software suite designed fill the critical needs of NDI’s partners around the world: involving citizens in decision-making, helping civil society organize for change, managing election data, and pushing their message out to thousands of people at a time.

Over the past year, NDI has reimagined DemTools, piloted new features and products and engaged with users in the field to learn and evolve the tools using a “human-centered” design methodology. On April 24, at the DemTools 3.0 launch, Derek Mitchell, NDI president, was joined by a panel of industry leaders to discuss how human-centered design has been integrated into their work.

Derek Mitchell: We cannot avoid the impact of digital technology on 21st century society. It's a fact of life that one cannot ignore. The only question is whether we harness its positive potential, or decide simply to bemoan the negative applications whose results we see in the daily headlines. Digital technology and platforms are neither good nor bad. It depends on how humans use it.

Robin Carnahan: If every time you're thinking of funding a project or doing something, you think about: “What is the user need?” and ask those questions, that's human-centered design.

Adam Fiveson: If you're not talking to the people you want to help throughout your process, that's a major risk. You know, if we don't talk to citizens, what are the risks? If we don't bring all of our stakeholders together in a room to help them sit down and better define the problem together, what are the risks that are inherent to not doing that?

Alexis Bonnell: I think what's really exciting is when we see great human-centered design or customer centricity—part of just asking the question can stimulate this idea of: “Am I entitled to that? Do I have a right to that?”

Fiveson: I certainly see education and the ability to raise issues and bring people into discussions as a key part of the process.

Georgia Bullen: It's really, really important to just ask more questions, understand the context and honestly observe when you can—go work with people directly, and observe what they're doing.

Carnahan: Do what NDI is really good at, which is bringing stakeholders and people together from all different backgrounds, and figuring out where the common thread is.

Marty Colburn: We're finding that gaming is a way to really engage communities, engage audiences. We find that the demographic in many of the countries we work in is getting younger. We have a youth movement, and the gaming aspect really engages them at a very early age.

Priyal Bhatt: DemGames offers matching and multiple-choice quizzes, and while this has been built for debates, this platform is meant to be easily customizable to a wide variety of different topics. Most importantly, DemGames has been built with user needs in mind.

Mitchell: The DemTools program seeks to harness the creativity and experience of people everywhere, and then share best practices with our partners working to strengthen democratic institutions and processes in their individual countries. It is critical in developing these DemTools that they can be adapted broadly to address the practical needs of those on the ground, that they be demand-driven and simple enough for general application. New digital technologies have the potential to promote political organization and civic activism, both of which are essential to democracy.