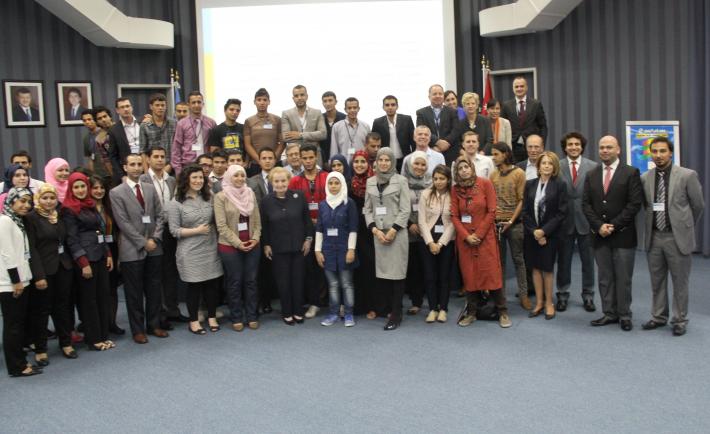 The DemWorks Video series will extend International Youth Day (12th August) to celebrate and amplify the political engagement of young women and young men throughout the month of August.

In Jordan, NDI is using an innovative program to help young people use democratic methods and community action to become invested in their nation’s future. Through “Ana Usharek” (“I Participate”), university students throughout the country are learning about democratic values and political systems, human rights, non-violent dispute resolution, and civic responsibility.

In this episode, NDI Country Directors Niti Shehu (Jordan) and Slobodan Milic (Morocco) discuss how the program has grown, and the resulting increase in young people’s interest and participation in politics and civil society.

Niti Shehu: Ana Usharuk is based on a model that NDI has developed.

Niti: It is really based on providing the knowledge and the skills for these youth to actively discuss, debate the issues that are of their concerns.

Slobodan: In those countries, this was the first time that they were allowed to actually publicly speak about these topics.

Slobodan: It is a popular program because it's simple and effective. Simple in a way that gives really concrete tools to young people to create change.

Niti: To start organizing on platforms on how to address and hopefully resolve some of those issues.

Niti: In Jordan, political activism is forbidden at the universities. So I think a success of the program is that it has really, you know, presented an opportunity for tens of thousands of young men and women to be politically active.

Slobodan: Once they graduated from those programs they joined civil society organizations and political parties, but they also started their own movements continuing to be civic advocates.

Slobodan: Once you see a group of fifth grader girls passionately arguing for their city to introduce recycling plant, the passion they have to you know, meet with the mayor, to meet with companies in that city to promote these sort of solutions, that's just pure magic.

Slobodan: What is the alternative if young people are staying outside of the system marginalized, then they are going to engage in activities that happen on the margins of society, and that's not a nice thing.

Niti: I think we should just learn how to listen to them much more and then allow them the space for them to really present all of their creative potential on, not only building future leaders but also starting to lead our societies as we speak.