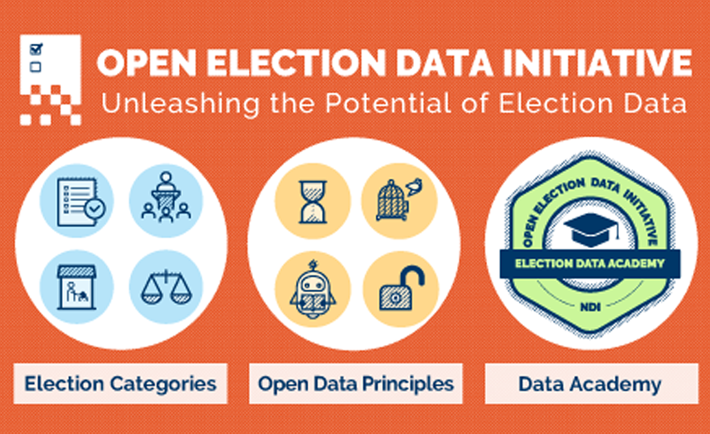 NDI is excited to announce the launch of the Open Election Data Initiative. The goal of the initiative is to ensure that citizen groups have access to election data that can give a true picture of an election process, including how candidates are certified, how and which voters are registered, what happens on election day, whether results are accurate and how complaints are resolved.

The Open Election Data Initiative, openelectiondata.net, adapts open data principles that are designed to enhance government transparency in other areas, such as service delivery, to elections. The initiative encourages governments to be more accountable and citizens to take a more active participatory role. While primarily geared toward civil society -- including election monitoring organizations, many of which are partners of NDI -- the initiative can also inform the efforts of political parties, election management bodies and other actors concerned with electoral integrity.

The initiative, which is supported by Google, identifies nine principles for open election data. It should be:

Citizens are starting to use open data to increase confidence in their elections. In Ukraine, for example, the citizen monitoring organization OPORA used open data to analyze applications to run for office. The data provided information the group used to dispute rumors that some candidates were denied the chance to run for office on technicalities. In Colombia, civil society group Misión de Observación Electoral (MOE) used official data to identify and map high-risk areas in the 2014 elections. Drawing on data on political violence, paramilitary forces and historical invalid ballot rates, among other things, MOE devised early warning indicators and categorized levels of risk in municipalities across the country. MOE shared their analysis with authorities through regular meetings during the pre-election period, helping mitigate electoral violence.

On the initiative's website, currently available in English, Spanish and Arabic and soon to be in French, you will find:

Other components of the initiative, such as an inventory of election data openness in 18 countries in Latin America and the Caribbean, will be launched soon. In the months ahead, NDI will organize trainings on the use of the Election Data Academy and will unveil tools for making election data more open.

If you would like to join the movement for open election data and receive updates when new learning modules or tools are added to the site, click here.

Michelle Brown
Michelle Brown is a senior advisor for the Elections and Political Processes team at the National Democratic Institute. Michelle works on NDI’s Open Election Data Initiative, which advocates for...
Connect with the author
NDI