How to get to YES: a venn-diagram can be a useful tool to formulate areas of agreement among opposing sides during intense negotiations. 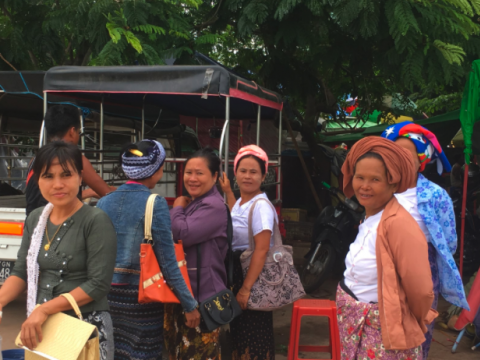 Ethnic women shopping at the market. Over 100 ethnic groups are spread across Myanmar, and some groups have been in armed conflict with the government for decades fighting for autonomy, rights and control of natural resources in their areas. 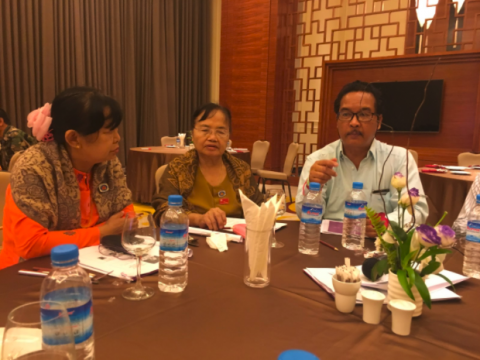 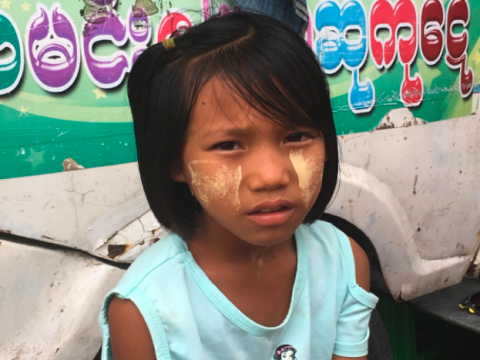 The future of Myanmar - a young girl selling maize in the market. 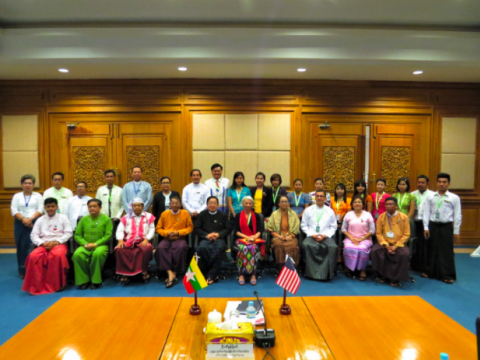 Signing Memorandum of Understanding between NDI and the Hluttaw.
Prev Next

In late June, I had the opportunity to lead a discussion with Burmese Members of Parliament (MPs) on ideas to build consensus and to improve ethical guidelines in the Myanmar/Burmese Hluttaw (Parliament). Having participated in a technical legislative assessment in early 2016, I was eager to see how much progress had been made since the historic 2015 election in which Aung San Suu Kyi’s National League for Democracy (NLD) achieved a sweeping mandate by winning almost 80 percent of elected seats. The NLD achieved an outright majority of nearly 60 percent in both national legislative chambers after 25 percent of unelected seats held by the armed forces is taken into account. Both the election and transition of power to the new NLD government marked political milestones - the first peaceful transfer of power between two parliaments in Burma’s modern political history.

The hard part of turning that mandate into effective governance and concrete legislative achievements is only the beginning. Ninety-one political parties competed in the 2015 election, demonstrating the breadth of views on the direction the country should take. One of the most difficult challenges the NLD faces is uniting factions and ethnic groups across Burma. While the NLD is clearly the dominant party in Parliament, it faces many roadblocks in building consensus and achieving legislative gains. Over 100 ethnic groups are spread across Burma, some still engaged in armed conflict that has lasted for decades. Efforts are underway to negotiate a peace agreement and bring armed ethnic groups into the political fold, but this process will take time. Additional barriers to progress include the Burmese military’s critical voting bloc in parliament which effectively bars constitutional reform. MPs face the challenge of reforming the enormous body of outdated laws that are inconsistent with each other, the constitution and democratic principles.

During the well-attended workshop on building consensus, MPs heard ideas and discussed techniques to establish trust among opposing parties and political views, including:

Parties that trust each other are the most likely to succeed in bridging divides and building true compromise.

Over 100 ethnic groups are spread across Myanmar, and some groups have been in armed conflict with the government for decades fighting for autonomy, rights and control of natural resources in their areas.

During the consensus building session, one high-level MP poignantly asked:

“What if you are willing to sit down and negotiate, but the other side is not? Where do you even begin? What do you do?”

The group discussed possible tactics in response, including finding an informal neutral setting to get to know each other, as well as reaching out to others close to the lead negotiator to better understand initial resistance and ways to build trust. Based on my nearly three decades of experience as a senior staffer in the U.S. Congress, I shared anecdotes of compromise, as well as gridlock and how it can be overcome.

Enforcing the rule of law can be a challenge, which erodes confidence in institutions that need to be strengthened. In two workshops focused on ethics reform, MPs discussed ideas for codes of conduct, rules and regulations that could help prevent:

During role-playing exercises for both the consensus-building and ethics reform workshops, I was struck by the moral authority of these MPs. They were given difficult hypothetical choices between party interests and constituent interests, between personal reward and long-term national benefits. In each exercise, the group chose the interests of the people and solving the long-term need over quick fixes with little disagreement or even discussion.

It is clear these MPs are on a mission to follow through on the promises they made before the election and to deliver their mandate for the Burmese voter. Many spent decades fighting for democracy and were even jailed by the former military regime. They aren’t going to squander this moment of historic opportunity and promise after having made such great personal sacrifice. While proceeding with deliberation and caution, it’s clear the MPs approach their work with seriousness and steely determination. Reflecting the emotion and uncertainty of their historic 2015 landslide, one MP told me:

“We didn’t know what would happen. When the election results came in and we realized we had won, would we wake up as MPs or in jail?”

The NLD landslide victory also meant only a small number of experienced MPs returned to Parliament. Elimination of Hluttaw institutional memory has heightened the need for technical assistance and knowledge-building. Bringing in experienced MPs and staff from international parliaments to provide advice on how to do the job is a high priority. NDI brought legislative experts such as former U.S. Representative Donna Edwards (MD) and myself in to help fill gaps in these recent trainings. Parliamentary exchanges with the House Democracy Partnership of the U.S. Congress will also be vital in helping MPs understand best practices to accomplish their goals.

Since 2013, NDI’s Parliamentary Resource Center (PRC) has played an invaluable role in providing a place for MPs to seek technical assistance, conduct research and meet with each other in a neutral setting. The PRC has built strong bonds among MPs while providing support to committee members and the parliamentary leadership. Key challenges for the future will be to help members of the Hluttaw deepen their legislative skills, become experts on committees, conduct effective oversight of the Executive - and to do so with the backing of a professional staff that can provide real technical support.

While still learning on the job, these MPs face numerous challenges. They do not have dedicated personal staff; they have no resources for outreach to their constituents; there is no budget to travel to their districts; and they are never certain when they will be in legislative session. The committees on which they sit lack trained technical and research staff, essentially meaning MPs must operate alone. The vast majority of Hluttaw and parliamentary committee staff perform only the most basic functions such as note-taking and logging correspondence. They are unable to provide technical or research assistance to the Chairs and committee members – a deficiency that is consistently highlighted by committee chairs and secretaries.

In a positive sign, the 2015 election and democratic changes that are sweeping Myanmar have sparked a new interest on the part of young people to participate.Young, well-educated Burmese - including staff at NDI’s Parliamentary Resource Center - are keen to work with the new parliament. This is a genuinely positive development and an opportunity to hire more skilled staff. It is also likely that these young, energetic staff will eventually run for office themselves, providing the next generation of leaders to carry the democratic torch forward.

Public expectations for the new NLD government to deliver change are very high. Early wins are needed to solidify their mandate, and to maintain the trust and confidence of voters. This will be a daunting challenge given the inexperience of the new MPs and Executive branch. Ending ethnic conflict, opening up the economy, creating jobs and adopting constitutional reform are very large tasks looming in Burma’s future. Building consensus with minority parties also will be critical for the big changes that the Burmese must enact. But it would be a mistake to bet against a country of such beauty and tremendous natural resources, which welcomes you with a warm mingalaba (how are you doing!) greeting in each encounter.

NDI is grateful for the support it receives from USAID to undertake its parliamentary strengthening programs in Burma.