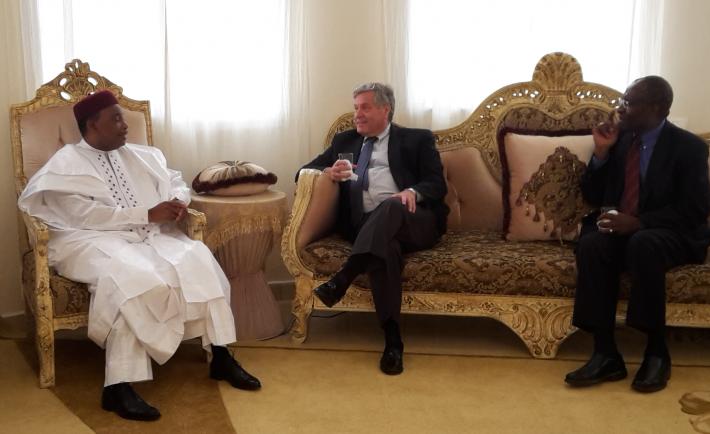 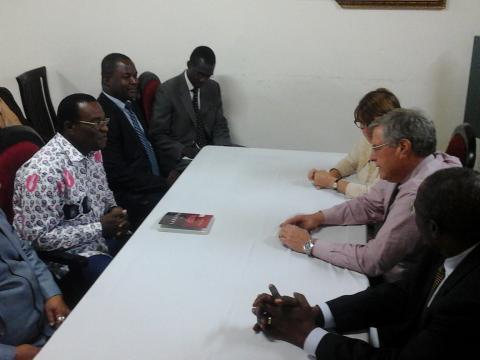 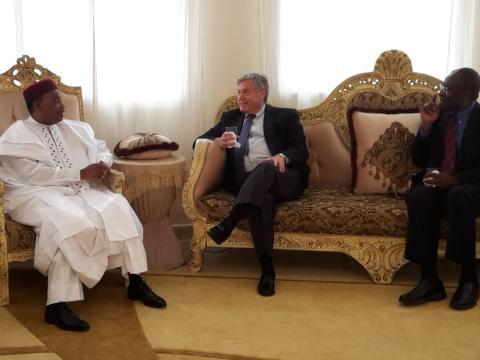 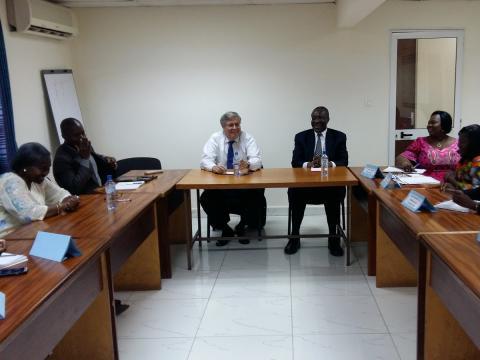 Editor’s Note: Chris Fomunyoh will serve as a panelist at an upcoming round table on “Elections and Governance in Africa - The Way Forward,” at the National Endowment for Democracy (NED) on September 16 (RSVP here). The round table will provide an opportunity to assess challenges and opportunities for meaningful elections and governance in Africa.

The next year and a half will be a critical period for democracy across Africa. In 2015 and 2016, African countries will hold more than 35 presidential and legislative elections. The conduct  of these polls will, in large measure, determine the nature and pace of democratic change on the continent. It was within this context that NDI President Ken Wollack traveled to Burkina Faso, Niger and Cote d’Ivoire, accompanied by Dr. Chris Fomunyoh, NDI’s senior associate and regional director for Central and West Africa. All three countries will hold elections before the end of the year.

During the August 15 to 23 visit, Wollack and Fomunyoh met with heads of state and government, cabinet ministers, elected officials and political and civic leaders to assess the state of election preparations and prospects for credible polls in those countries.

Since the popular uprising that ousted former President Blaise Compaore of Burkina Faso in October 2014, the country has invested heavily in laying the foundation for successful democratic elections this October. The electoral commission and the constitutional court are viewed by many Burkinabé as independent. The country also has a vibrant and active civil society. In Ouagadougou, the capital of Burkina Faso, Wollack and Fomunyoh, accompanied by NDI Burkina Faso Resident Director Aminata Kasse, met with political party and civic activists who had participated in NDI-facilitated trainings to help improve the communications and organizing skills of thousands of Burkinabe women. Josiane Kabré, former mayor of Saba, a small town located east of Ouagadougou, explained how women councillors had trouble speaking in public and were hesitant to participate in council debates before NDI began working with them -- instead, they sat behind male officials and let them speak. “Now, thanks in part to NDI’s training and assistance,” she said, “the women councillors have a seat at the table and a voice in decisionmaking.”

In neighboring Niger, Wollack and Fomunyoh were joined by NDI Resident Director Jan Nico Overbeek in meeting with President Mahamadou Issoufou and parliamentary leaders to discuss the 2016 elections and varying opinions about the state of the voter registry, the sequencing of presidential and local elections, and the roles of the Independent National Electoral Commission and the country’s constitutional court. The team also met with senior opposition leaders. After the meetings, Wollack noted that “despite significant differences on the issues, all parties asserted their commitment to the democratic process and agreed to maintain open lines of communications.”

In Cote d’Ivoire, the October presidential election will be the nation’s first polls since election-related violence following the disputed 2010 polls resulted in more than 3,000 deaths and hundreds of thousands of internally displaced. Wollack, Fomunyoh and NDI Resident Director in Cote d’Ivoire Christiane Pelchat, spoke with political party leaders about voter registration, campaign finance and a code of conduct that political parties would sign and hence commit to resolve political and electoral disputes through dialogue and legal means, rather than resorting to violence. The Institute is supporting the development of the code and, as in Niger and Burkina Faso, is assisting the efforts of civil society organizations to monitor the elections. The NDI team also met with Prime Minister Daniel Duncan, leaders of the country’s three major political coalitions and communicated by phone with the country’s president, Alassane Ouattara.

While in Abidjan, Cote d'Ivoire, Wollack spoke to the press about the significance of the upcoming polls. "Peaceful and credible elections is the best way to honor the innocent men, women and children who died in the aftermath of the 2010 elections," he said.

At the end of the trip, Wollack noted that, despite the challenges, there are reasons for optimism. “Democratic progress is not always linear but, with active citizen engagement, countries on the African continent are poised to make significant advances," he said.

Benjamin Staton
Benjamin Staton is a project assistant for the National Democratic Institute's Central & West Africa team, supporting programs in Cote d’Ivoire, the Democratic Republic of Congo and the Central...
Connect with the author
NDI