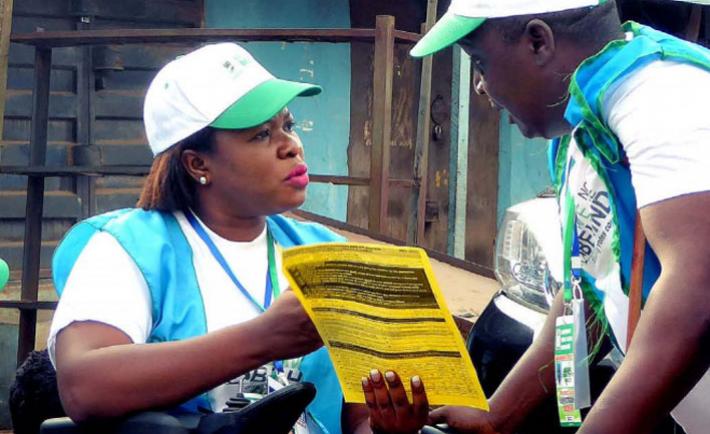 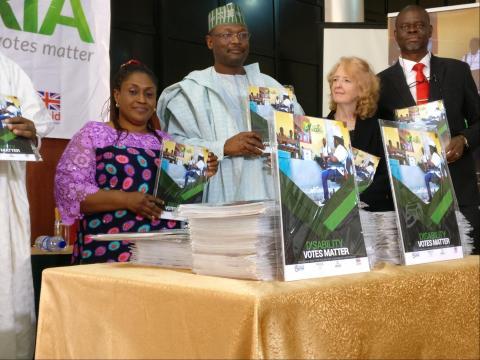 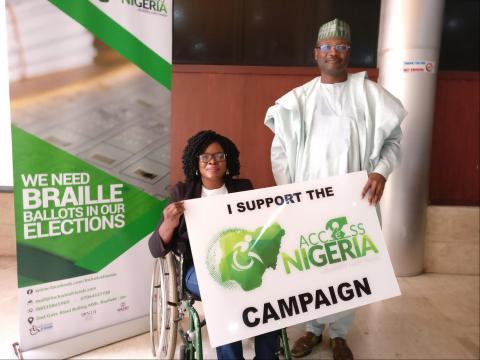 In Nigeria, there is a dearth of reliable data on the number of people with disabilities, let alone the challenges they face participating in elections. In its World Report on Disability, the World Health Organization estimates that 15 percent of the world’s population lives with some form of disability. Based on this report, IFA approximates that there are 25 million Nigerians with disabilities.

On October 25, in front of key stakeholders including representatives of the Independent National Electoral Commission (INEC) and journalists, IFA presented its audit report, which contains findings about the specific barriers persons with disabilities encounter in the electoral process. The report is part of IFA’s broader Access Nigeria: Disability Votes Matter advocacy campaign, which aims to improve the participation of persons with disabilities in political and electoral processes through evidence-based advocacy, voter education and get-out-the-vote mobilization efforts.

At the presentation of its audit report last month, IFA also unveiled a new Access Nigeria campaign video to help illustrate the experience of persons with disabilities on election day. Key recommendations highlighted during the event include:

In response, INEC chair, Professor Mahmood Yakubu, stated that the Commission “recognizes the rights of persons with disabilities as fundamental to [Nigeria’s] democracy.” He also detailed some of the recent efforts to make elections more accessible, including the establishment of disability desks at commission offices and disability-specific provisions in its 2017-2021 strategic plan.

Despite these advancements, Chairman Yakubu acknowledged the substantial challenges that continue to disenfranchise voters with disabilities in Nigeria. He assured that INEC would look into the audit report and leverage his role as chair of the Economic Community of West African States (ECOWAS) Network of Electoral Commissions (ECONEC), to share IFA’s audit recommendations and findings with other election management bodies in the subregion. Moreover, he approved INEC personnel’s participation in IFA’s quarterly stakeholder forums on inclusive elections, slated to begin next year. On Twitter, INEC affirmed its commitment by tweeting photos of Chairman Yakubu lending his support to the campaign.

Prof. Mahmood today assured Persons With Disabilities of the Commission's commitment to their full participation in the electoral process. pic.twitter.com/hSmr9PApwl

While INEC has made notable strides in bettering access to electoral processes for voters with disabilities, IFA recognizes that more needs to be done to turn these commitments into action on the part of INEC and other key stakeholders, to strengthen and safeguard disability rights. With NDI’s support, IFA will continue to advocate for persons with disabilities in Nigeria through sustained pressure on INEC and disability-centric voter education efforts.

Additionally, IFA is exploring partnerships with budget monitoring organizations that could provide valuable data on INEC’s budget and expenditures. IFA plans to use this data to put pressure on INEC to invest in administrative reforms that would improve voting polling unit access for persons with disabilities. IFA is also assessing possibilities for legal reform that it could advocate for to the National Assembly and ministries that have purview over electoral issues. IFA is also considering conducting a third audit in another state gubernatorial election in 2018 to evaluate improvements to the accessibility of polling units, which would inform IFA’s advocacy strategy in the lead up to the 2019 national polls.

Lauren Moses
Lauren Moses is a Project Assistant on the Central and West Africa Team at the National Democratic Institute in Washington, D.C.
Connect with the author
LinkedIn