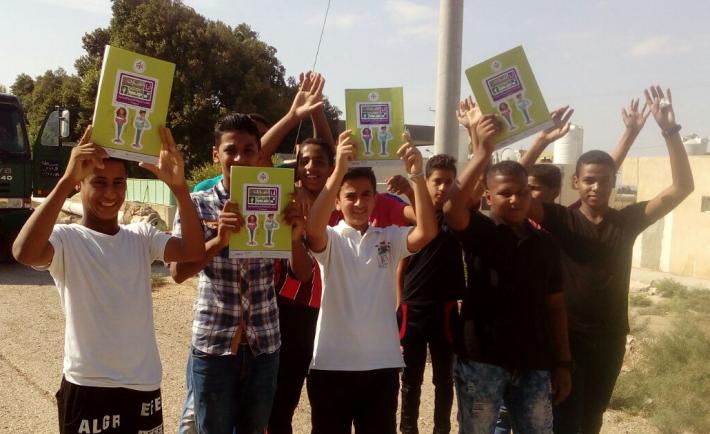 In Jordan, youth under the age of thirty comprise more than 70 percent of the population. But the growing youth population has faced limited opportunities to engage in politics, leading to rising apathy and low civic participation among young Jordanians. For any democracy to succeed it must deliver for citizens through accountability, transparency and inclusion of all people in the democratic process. That is why NDI launched Ana Usharek (“I Participate”) to get Jordanian youth politically engaged as agents of positive change instead of turning toward extremist ideologies as a last resort.

Under Ana Usharek, NDI partnered with Jordan’s Ministry of Education to design a new civic education curriculum that teaches core principles of democracy, citizenship, human rights, tolerance and critical thinking. Today, over 8,000 students are participating in Ana Usharek in over 300 schools across all regions of Jordan. These emerging leaders work with social studies teachers to design, lead and implement local initiatives that achieve real change in their communities.

For example, a group of eighth-grader Ana Usharek students decided to take action to fix a deadly, deteriorating bridge over a canal next to their school. More than 100 people lost their lives as a result of drowning in the canal, including two fourth-graders from their school. Students took matters into their own hands by leading a campaign to improve the bridge. Supported by Ana Usharek, the students researched public policies, sought citizen input, designed an action plan, held meetings with local officials and stakeholders, and eventually presented a plan to their representative in parliament. As a result, local authorities built a safety fence and footbridge for the canal.

"We weren't sure that our voices will be heard sine we are only kids, but the initiative we have developed through Ana Usharek Schools program has taught us confidence. I can now speak with any decision makrer, be it a minister or a director, with confidence." - 9th Grade Student

Two years later, the same group of students decided to take action to address the lack of modern medical facilities in their community. Their town hospital could not even provide basic medical services, such as MRIs or ultrasound. Using skills they learned from Ana Usharek, they led an advocacy campaign to gain support for building a full-service hospital in their town. They built a groundswell of support and convinced Jordan’s Minister of Health to allocate funding to build a fully-equipped hospital. Last month, authorities broke ground to expand the medical center. The students have continued their advocacy, appearing on national Jordanian TV to highlight their campaign and encourage other youth to get involved in community action.

As youth continue to call for greater political and economic empowerment in Jordan and across the region, successes such as those in Deir Alla demonstrate that youth can achieve tangible changes in their communities through civic engagement and local action. With the right tools and knowledge, citizens as young as 13 can help foster a culture of political participation for current and future populations and in the process transform their societies.

“Ana Usharek” and its related programs are implemented with support from the United States Agency for International Development (USAID) through the Consortium for Elections and Political Process Strengthening (CEPPS).