Members of the Defense and Security Commission of Burkina Faso's National Assembly meet members of the armed forces during an informational visit to a military base in Kaya. 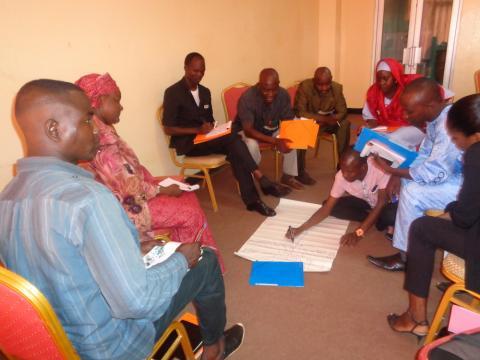 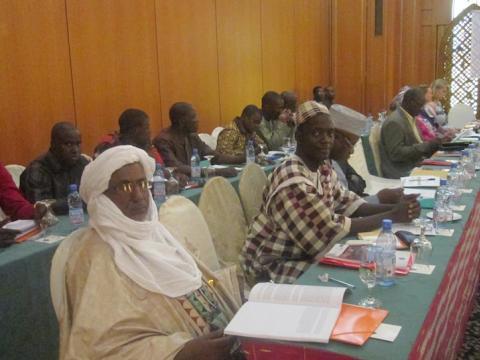 Members of the Malian National Assembly gather with representatives from the United Nations, foreign diplomatic missions and NDI staff to finalize key documents that will guide the defense and security committee's work from 2016 through 2018

Officers representing the Chief of the Defense Staff brief members of parliament on the Burkinabé military's organization, operations and needs during an NDI-organized site visit to the military base in Kaya 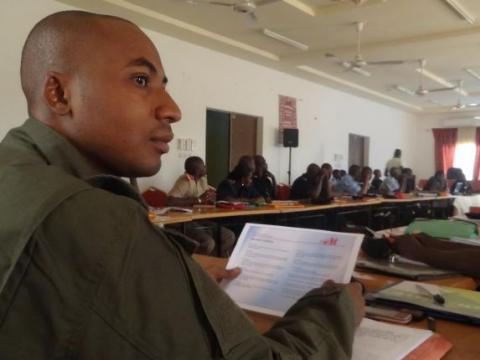 Members of Niger's national police, national guard and civil protection forces review the the laws and statutes governing internal security forces at a workshop organized by NDI and DCAF in Niamey
Prev Next

Violence and crime pose serious threats to citizen security. A lack of response to these threats from authorities erodes public trust in government institutions and weakens prospects for stable democracy. Maintaining the peace and ensuring the security of citizens is necessary for a democracy to develop and endure. Likewise, democratic institutions, such as parliaments, media and civil society, help guarantee a focus on citizen interest and public good, especially related to civilian oversight of the security sector. Threats to citizen security are particularly notable in West Africa’s Sahel region and Central America’s Northern Triangle, areas where NDI works to bridge the gap between citizens’ security needs and the state’s ability to meet them.

While Burkina Faso, Mali and Niger face the common, cross-border challenge of radical Islamist terrorism, each must also tackle domestic security threats: vigilante groups, armed rebels and political deadlock that hampers decision-making. In partnership with the Geneva Center for the Democratic Control of the Armed Forces (DCAF), NDI supports civil society organizations (CSOs), parliamentarians and executive branch institutions in each country to govern security in accordance with democratic principles. Strengthening democratic governance of the security sector includes control and oversight of armed forces by civilian members of parliament and civil society, and aims to restore citizens’ confidence in the state’s ability to provide a secure environment while equipping authorities with the ability to deliver it.

In El Salvador, Guatemala and Honduras, which comprise the Northern Triangle, the deterioration in citizen security and challenges faced by governments in reducing violence continue to erode trust in democratic institutions. Citizens face homicide rates among the highest in the world coupled with high rates of impunity -- exemption from consequences for illegal actions. NDI brings together legislators to learn about and debate diverse and innovative policy options and improve regional coordination on legal frameworks designed to reduce violence.

Building trust between citizens and security forces was identified as a core component of Burkina Faso’s transition to a resilient democracy. NDI partner CSO, the Center for Democratic Governance (Centre pour la Gouvernance Démocratique, CGD), interviewed civilians and members of security forces to understand what causes mistrust and undermines people’s faith in officials’ ability to provide security. CGD brought together members of civil society, defense and security forces and the media to discuss how their findings translate into policy that fosters relations built on dialogue and trust. CGD will draw from this discussion to advocate policy makers and to create training materials for security actors. The goal is for citizens to know they can rely on the authorities to protect them and listen to their concerns while making their community safer.

Lawmakers play a key oversight role in ensuring citizen security, including passing laws governing security forces, overseeing how these laws are implemented, and ensuring that sufficient resources are allocated to address security concerns. Following the signing of the 2015 peace accord that ended a three-year conflict between the government and rebel alliances, Malian authorities were charged with increasing the effectiveness of state institutions to meet citizens’ needs and represent minority populations. To equip them with the skills to be able to legislate to counter security challenges, NDI  provided tailored training on topics identified by members of the National Defense, Security and Civil Protection Committee of Mali’s National Assembly, ranging from budgeting for defense and security to identifying how gender intersects with security governance. NDI helped the committee develop a three-year strategic plan and priority action list. As the President of the National Assembly, Issiaka Sidibé, noted, these plans “will assuredly help our institution to play its part in a rational manner in the wake of the growing insecurity facing Mali.” Amid renewed violence by former rebels who find the pace of implementation frustratingly slow, augmenting the Assembly’s ability to support the government to fulfill its pledges under the accord will also respond to citizens’ calls for peace.

To combat the transnational challenges to citizen security in Central America, NDI builds bridges between elected officials, political leaders and citizens to reduce criminal violence plaguing communities, including the development of  a regional agenda on legislation that impacts citizen security. As the challenges stem from cross-border criminal organizations, NDI builds consensus on priority legislation that will improve the security of citizens in each of the three countries.

Executive branch agencies provide an opportunity for democratic principles to become embedded in procedures, policies and practices. In Niger, where the National Police are a branch of the ministry responsible for internal security, police officers are agents of the state, but lack the public’s  trust. While the National Police had adopted a code of ethics and professional conduct in 2011, they had no formal methodology to explain and train officers on the code. NDI and DCAF collaborated with police leadership to develop a guide to the code of conduct. After studying the guide, police officers had better sense of how to maintain order during protests while respecting the protesters’ rights to freedom of assembly and speech, leading to an increase in the respect of these rights and bolstering citizens’ confidence in police. In supporting the professionalization of the National Police, NDI seeks to reinforce their ability to protect people from crime and violence, thereby increasing citizens’ trust in the state.

Citizens who confront high rates of violence, encounter extortion, and interact with legal systems marked by corruption and impunity on a regular basis come to question the legitimacy of governments that fail to deliver on the most basic of human needs – safety and security. In both the Sahel and Central America, NDI aims to foster enhanced oversight and monitoring of the security sector, advance improvements to the institutional framework governing it, and engender greater respect by security institutions of their obligations within a conflict-resilient, democratic society so citizens enjoy security of property and person.

Editor’s Note: NDI’s work with the security sector in Burkina Faso, Mali and Niger is supported by the Danish Ministry of Foreign Affairs under the framework of the Danish Regional Stabilisation and Peace Programme, which is also funded by the Norwegian Ministry of Foreign Affairs. NDI’s work with legislators in the Northern Triangle is made possible thanks to the National Endowment for Democracy’s support. Katherine Conway-Gaffney also contributed to this post.

Leila Stehlik-Barry
Leila joined NDI’s Central and West Africa team in 2015, where she supports programs in Burkina Faso focused on increasing political participation by youth and women and building the capacities of...
Connect with the author
LinkedIn
NDI