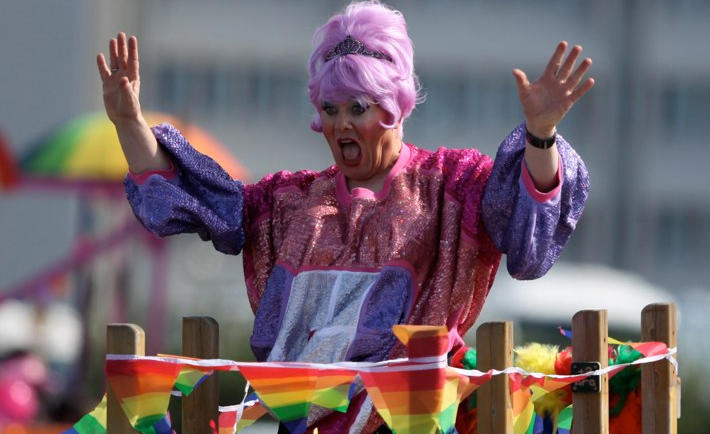 Jon Gnarr, in his official capacity as mayor of Reykjavik, Iceland. Gnarr, a sketch comedian, was elected in 2009 on satirical platform of providing free towels at public pools, a polar bear at the zoo and a drug-free parliament by 2020.

In the last decade, a proliferation of anti-establishment parties in the Euro-Atlantic region has led to increased numbers of protest candidates elected to local, national and European office. Protest parties reject mainstream politics and incumbency, opting instead for sensational campaigns that often advocate for a single issue. Pirates in the UK or anarcho-surrealists in Iceland make for interesting debates, but what happens when candidates who reject a system become part of it? Recent examples show that citizens will vote for protest candidates to highlight “elephant-in-the-room” issues, but in the long run candidates need to be able to deliver on critical issues to maintain support.

In 2009, Icelandic television sketch comedian Jon Gnarr ran for mayor of Reykjavik on a platform of providing free towels at public pools, a polar bear at the zoo and a drug-free parliament by 2020 -- satirical policies intended to highlight politicians’ ineffective responses to the country’s financial crisis. Gnarr, who describes himself as an anarcho-surrealist, was elected with more than 34 percent of the vote and his fellow “Best Party” candidates took six of the 15 seats on the local council, enabling them to form a government coalition with the Social Democrats.

Gnarr and his party members dealt directly with the crisis, raising local taxes by 30 percent and closing and merging public schools. He was only the third Reykjavik mayor in 32 years to finish a full four-year term, using his incumbency to take controversial and decisive action on important issues. Gnarr attributed his ability to make tough decisions on his lack of long-term political ambition, observing, “most [politicians] have a lot to lose; they have a career and a past...But I don’t care. I don’t intend to get re-elected.”

The anti-European Union (EU) United Kingdom Independence Party (UKIP) began in 1993 as a single-issue party, promising voters an exit from the EU. In the May 2014 EU parliamentary elections, UKIP won 24 seats and became the most represented British political party in the European Parliament (EP).

In keeping with their anti-EU governance stance, UKIP members of the EP have the worst voting attendance record and typically vote against even innocuous EU legislation, such as a 2014 bill to protect elephants. While the party has not sought to influence EU legislation, UKIP has used its conspicuous political profile to increase its influence inside Great Britain, gaining seats at the local level and recently maintaining a presence in the House of Commons. UKIP’s existence has allowed voters to send a targeted message about a niche issue -- the UK’s membership in the EU -- and the party’s candidates have influenced the national dialogue.

But some parties are not so successful. In 2006, Germany’s Pirate Party, for example, emerged from the technology community in opposition to regulations that cracked down on the illegal sharing of copyrighted files over the Internet. Over time, the Pirate Party’s minor successes in local and state elections failed to translate into electoral success at the national level, most likely because of its inability to deliver on its primary raison d’etre.

Protest parties, like the Pirate Party, rarely retain public support in the long-term because of often narrow political platforms. Opportunistic policy interventions focusing on small, achievable goals may produce the most impact.

While protest candidates are products of their specific context, in general their success can be measured by policy change and number of seats gained. Protest candidates can succeed on both fronts by taking decisive policy stances deemed too daring for mainstream parties, and if they have the ability -- and will -- to implement the changes they propose.