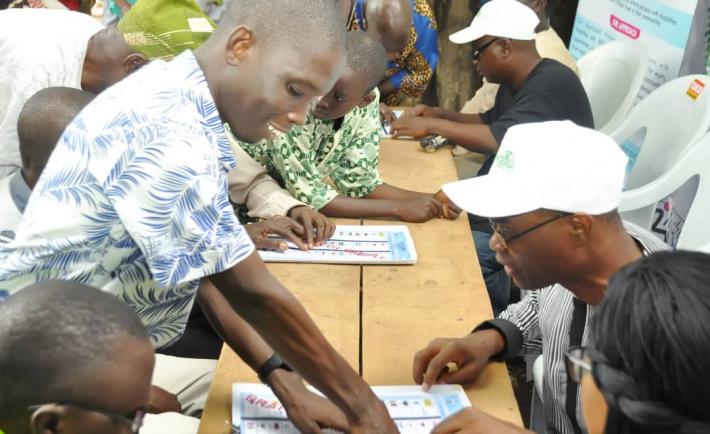 A man smiles as he uses the Braille ballot guide in Osun state, Nigeria. 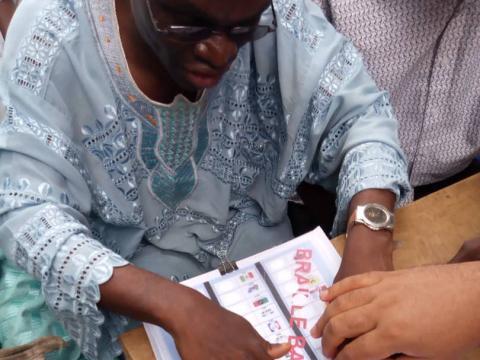 A man learns how to use the Braille ballot guide during a training led by #AccessNigeria.

In advocating for strong democratic institutions around the world, it is easy to overlook the rich diversity of democratic traditions across nations. In the United States, presidential hopefuls descend on Iowa every four years to grill steaks for eager caucus-goers. In London, commuters tune to BBC Radio to hear the prime minister and opposition leader spar on issues of the day. And in Nigeria, voters press their thumbs into ink pads, locate the name and party of their chosen candidate, and leave a thumbprint to mark their democratic choice.

For Nigerians with vision impairments, however, voting can be particularly difficult, and the potential for error is high, as ballots are not produced with their disability in mind. Recognition that an inaccessible voting process can disenfranchise people with disabilities drove the recent campaign led by the Inclusive Friends Association (IFA), a disabled persons’ organization and NDI local partner, to introduce Braille ballot guides for use by voters with visual impairments during the Osun state gubernatorial election in September.

In the months leading up to the election, the #AccessNigeria campaign - a coalition led by IFA and allied groups devoted to making Nigeria’s electoral process more accessible for voters with disabilities - met several times with senior officials from the Independent National Electoral Commission (INEC). The coalition provided INEC with crucial data collected on Osun state’s population with vision impairments as well as advice regarding accommodations to enable independent participation of Nigerians with disabilities in elections. The #AccessNigeria campaign’s efforts proved fruitful, as INEC sought IFA’s assistance in developing Braille ballot guides for distribution in polling locations during the Osun election. After IFA developed a Braille ballot guide, INEC approved IFA’s guide design and committed to pilot them during the Osun election in anticipation of a possible nationwide deployment for 2019 general elections.

On September 19, days before the vote in Osun, IFA and INEC staged joint trainings and voting simulations for 100 Osun voters with disabilities on how to use the Braille ballot guides. Participants reportedly experienced ease in using the sample ballots and praised the #AccessNigeria campaign and INEC for helping to break down barriers to participation in the electoral process. On election day, in what was an unprecedented first in Nigerian history, INEC provided Braille voter guides in 89 polling locations across Osun state, providing voters with visual impairments the ability to cast ballots independently.

In the lead up to Osun, NDI supported IFA to convene meetings with INEC, develop targeted asks to key decision-makers, design and deliver campaign messages, and organize voters with visual impairments for the successful election day pilot.

As approximately 4.25 million Nigerians are blind  or have low vision and nearly 30 million Nigerians (15 percent of the country’s population) live with some form of disability - the Braille ballot guide pilot in Osun marked a critical advancement in opening up Nigeria’s electoral process to voters with disabilities. Indeed, the INEC commissioner for Osun state remarked of the pilot, “The braille ballot guide is another step forward in the area [of reasonable accommodation to] people with disabilities. We promised that the usage of the Braille ballot guides will be maintained by guiding people with disabilities on how to use [them] during [the] Osun state governorship election and [the] 2019 general elections.” IFA’s Executive Director, Grace Jerry, echoed these sentiments, noting that, “For the first time in our country’s history, INEC [is] piloting a Braille ballot guide to assist voters with visual impairments to cast their ballot without any support in line with [the 2010 Electoral Act] and Nigeria’s secret ballot system."

Ultimately, INEC’s distribution of sample ballots in Braille to guide Osun voters with visual impairments is a significant advancement for Nigeria’s participatory democracy, especially if rolled out nationwide for the 2019 federal elections. The tireless advocacy of IFA and the #AccessNigeria coalition, combined with NDI’s technical assistance, paved the way for the pilot’s success, and demonstrates the power of robust civil society partnerships to achieve tangible progress in democratization. From Cedar Rapids to Osun, activist citizens continue the hard work of organizing to make their voices heard.