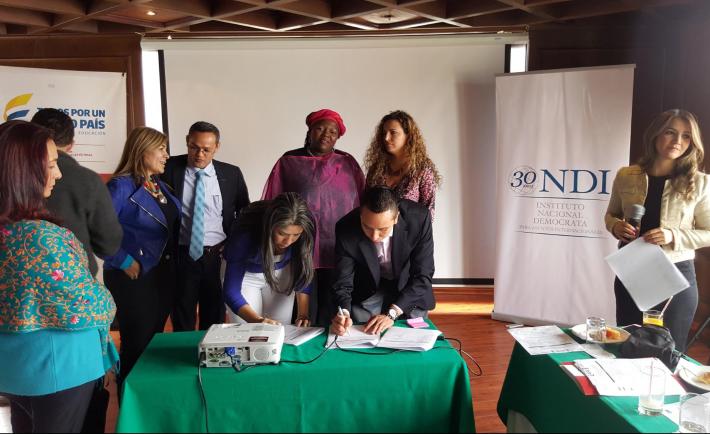 Presidents of federations of local assembly and council members and the Victims Unit Subdirector for Participation sign a collective reparations plan. 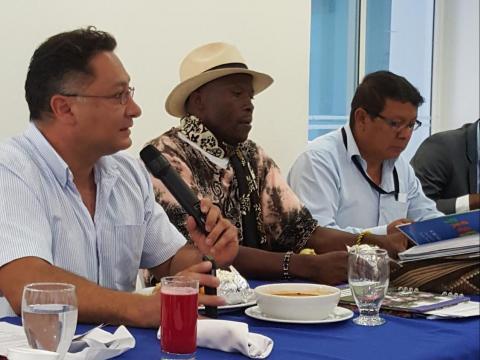 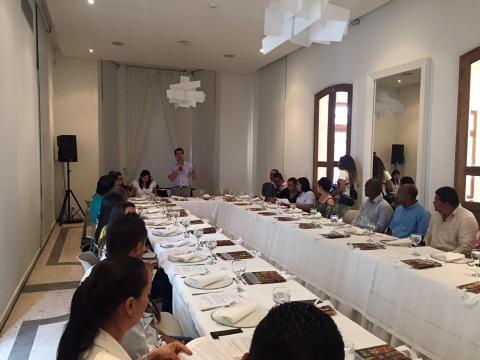 Countries transitioning out of violent conflict are more successful in achieving lasting peace when representative institutions are inclusive and manage reconciliation processes fairly. The end of violent conflict does not guarantee a political voice for former combatants or reintegration into society. By its nature, violence also generates victims, who must be central actors in the development of peace accords, reparations plans and transitional justice systems. In a post-conflict context, the development of transitional democratic political processes is necessary for fostering reconciliation and building peace.

In recent years, Colombia, home to the longest ongoing violent conflict in the Americas, has taken steps to develop these political processes as it seeks to transition from war to peace. Since the 1960s, the government of Colombia has been at war with armed revolutionary guerrilla groups. However, it launched peace negotiations with the largest armed group, the Revolutionary Armed Forces of Colombia (FARC) in 2012 and will soon begin negotiations with the second largest group, the National Liberation Army (ELN). After four years of talks, the government reached an agreement with the FARC that was met with widespread international support. However, it was put to a public plebiscite on October 2 and rejected by citizens in a razor-thin margin of less than half of one percent. Despite this setback, the government and FARC have maintained a ceasefire and insisted on their commitment to finding a negotiated settlement. If successful, these negotiations would end a five-decade war that has generated more than 8.1 million victims. In anticipation of its successful conclusion, the government has taken significant steps to provide reparations and establish new processes and political bodies for victims to become involved in politics at the local, regional and national level.

Reparations can play a central role in satisfying victims’ expectations for justice and establishing rule of law, as well as providing redress for harms suffered. Reparations can take a number of forms, including financial compensation, guarantees of non-repetition, new legislation, social services, or symbolic gestures such as official apologies. These actions are influential in rebuilding trust in institutions and establishing government responsiveness to citizens’ needs, particularly if they are approached and implemented in an inclusive way.

Through a 2011 law, the government established the Unit for the Care and Reparation of Victims (Unidad para la Atención y Reparación Integral a las Víctimas, Victims Unit), charged with supporting victims to participate in policy design and implementation, and for helping establish democratically-structured “Victims Participation Roundtables” (mesas de participación efectiva de víctimas, VPRs) in each of Colombia’s 1,122 municipalities and 32 provinces to work with authorities to address victims’ grievances. These victims include those who experienced torture, kidnapping, displacement, sexual violence, murder of a family member, or other serious crimes. As marginalized populations are often disproportionately affected by violent conflict, the VPRs reserve seats for vulnerable groups such as women, Afro-Colombians, indigenous peoples and lesbian, gay, bisexual, transgender and intersex (LGBTI) individuals. The VPRs also provide a mechanism for victims to have a voice in public policies regarding issues that impact them, such as reparations and land rights.

Since 2013, NDI has provided technical assistance to VPRs in the departments of Antioquia, Atlántico, Bolívar, Cauca, Chocó, Cundinamarca, La Guajira and Nariño to strengthen their capacity to make recommendations to local and national authorities. NDI’s workshops train VPR members on holding internal elections, developing their strategic plans, securing funding, designing government oversight mechanisms, and implementing advocacy strategies to inform and ensure the implementation of government reparations projects for victims. VPRs that received NDI support subsequently met with victims, government representatives and local councils to present their reports. Based on the VPRs’ recommendations, several local councils established committees to monitor the implementation of policies that impact or directly provide assistance to victims. NDI and partner organizations also developed a manual to guide VPRs to effectively monitor, evaluate and conduct oversight of public policies related to the Victims Law. Other international organizations, government institutions and VPRs around the country have used this manual.

“Thanks to NDI’s work to help strengthen the Victims Participation Roundtables, we can say that we have a much stronger policy framework for victims than we had four years ago. Roundtable leaders understand that they may have an impact by providing proposals and reaching agreements with local governments.” - Gabriel Bustamente, Victims Unit Subdirector for Participation

For the past two years, NDI has also supported a collective reparations process for local assembly and council members, an initiative that developed during multiparty roundtables that NDI helped establish at the local level and which was accepted by the Victims Unit. Through regional forums and meetings with these victims and the Victims Unit, NDI helped federations of local assembly and council members reach consensus on an assessment of the collective damage suffered by this population, as well as a collective reparations plan. The Victims Unit is now implementing this collective reparations plan in collaboration with government agencies, municipal associations and local councils. The collective reparations process provides a venue where victims can participate and establish their agenda within national, regional and local peace and reconciliation initiatives. It also provides an opportunity for citizens to hold the government accountable regarding the development of public policies addressing victims and an infrastructure for potential future peace accords. To build on this success, NDI is supporting local assembly and council members, as well as those involved in other collective reparations processes, such as women, indigenous groups, labor unions, human rights defenders, and journalists, to advocate for victims’ rights, social justice and citizens’ political participation.

The VPRs and collective reparations processes offer an example of how supporting democratic practices can converge with reconciliation and reparations activities, thereby repairing civic trust and improving a society’s democratic resilience. By supporting these processes, NDI is helping improve Colombian citizens’ involvement in their country’s democratic processes. This programming also helps authorities and those most impacted by the conflict to generate conditions for improved reparations mechanisms and an inclusive post-conflict environment.

Editor’s Note: NDI’s work in Colombia to support transitional political processes and victims’ reparations is funded by the National Endowment for Democracy (NED). NDI’s programming in Colombia has also been funded by the United States Agency for International Development (USAID), Canadian Department of Foreign Affairs, Trade and Development (DFATD), and Google.org.