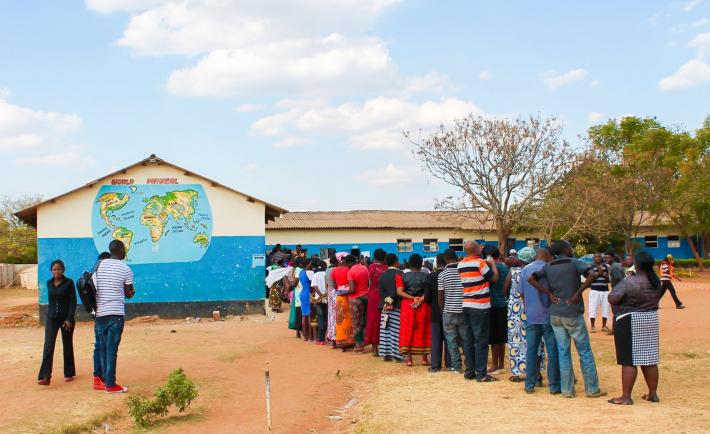 My name is Helga Muchimba, and I am from a country in Southern Africa called Zambia. l live in Copperbelt Province in the city of Kitwe, and am the second born in a family of two girls and three boys. In my family, my mother belongs to the ruling party, Patriotic Front, while my elder brother and young sister belong to the main opposition party, United Party for National Development. I belong to the Alliance for Democracy and Development (ADD). I didn’t know much about politics when I was young, but I did want to understand why people decide to get involved. I wanted to understand and be part of the activities associated with the governance of my country, especially those that would improve the lives of its citizens.

The current political situation in Zambia is difficult. During the general and by-elections you see violence between parties as they campaign, and because of this, people are afraid to wear party regalia. The fights between the two main political parties have ended in clashes where lives have been lost. Through all of this, I believe we must forge ahead because Zambia is a democratic country – which means every party has the right to their opinions and freedom.

I joined my party – ADD – as a party member, but later contested the position of secretary of the youth wing, which I won. When I became a part of the actual party structure I began to really understand politics and had the skills to tangibly help my community. For example, during the last rainy season we had floods in our area and when we contacted our local councilor he said he had no solution. Most people are afraid to call on their councilors and members of parliament (MPs) because they don't realize they are there to save our communities. I contacted our MP, who sent people to check on the situation that same morning, and the next day they built new drainage systems and began diverting water to those systems.

At an NDI-Zambia workshop in 2016, I was selected as my youth wing’s peace ambassador and have since attended trainings on election monitoring, peace strategy and public speaking. These workshops have given me tools to become an active voice in my party and community. For example, I now understand issues around election monitoring, have monitored elections in my country and have even had the chance to train others. I am able to speak out when there is need in my community, as well as in my church, and I am able to do this because of NDI’s trainings on public speaking. NDI’s workshop on peace strategy, with Bernard Wakoli, national youth leader of the FORD-Kenya party, taught me about the dangers of violence and how to create a strategy for peace when violence arises.

As young people from different political parties, we have learned that violence should not be part of us and we should denounce violence at all costs. We must use every opportunity and avenue to advocate for youth-sensitive policies and political space that provides respect for freedom of association, freedom of movement, freedom of the press and access to information. We must become aware of our rights and opportunities to participate in decision-making so we can continue to shape our futures together.

Helga Muchimba
Helga Sophia Muchimba is from Kitwe, Copperbelt Province, Zambia. She runs her own business in household goods and clothes, and serves as district secretary for Kitwe for Alliance for Democracy and...