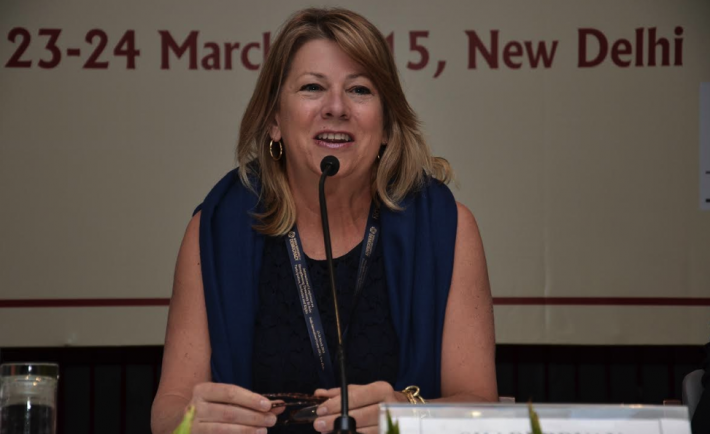 Shari Bryan speaks on a panel on urbanization and the challenges of local government and citizen engagement in New Delhi, March 2015.

Cities, for the first time in history, are now home to more than 50 percent of the world’s population. This is an incredible demographic shift, and in their rise to prominence, urban centers have begun to shape national and global-level discussions. After all, there are now megacities in Asia and Latin America with larger populations than some European countries. These megacities drive more than 70 percent of the world’s economic activity, and some of their local governments are acting across national borders to strike their own trade deals and address climate change issues.

There is also evidence that social norms change more quickly in urban environments, which can narrow gender gaps in education, provide increased legal protections for women, and offer more opportunities for women to engage in the formal economy. Yet, while women are beginning to make up a dominant percentage of urban residents they remain excluded from critical conversations on how those cities are run. Worldwide, women make up less than 5 percent of mayors -- a mere 10 out of the world’s 195 capital cities are headed by women. Even in countries with high levels of women in national office, there has not been a corresponding level of representation in local offices or councils. As a result, women’s needs and priorities are too often ignored by urban policy-makers and planners, making cities more difficult, often dangerous, places for women to thrive.

This paper provides an overview of the opportunities and challenges that women in cities face, and how these issues impact or influence their participation in politics and policymaking. It poses important questions for government officials and policy makers, as well as citizens, activists and development practitioners about issues that are central to the post-2015 development agenda: inclusion, gender equality and women’s empowerment, sustainable growth, and effective, accountable institutions at all levels. As NDI considers these questions, we are looking at a spectrum of opportunities to assist elected leaders at the urban level recognize the unique challenges women face.

When I visited Mumbai (a city of 12 million people with a female mayor) in March this year, I was struck by the way young women and young men were using technology to provide feedback on local government services. The volume and diversity of this engagement showed local democracy at work, but more needs to be done.

City governments must manage their engagement with their citizens, but also deliver basic services and set the environment for income generation and employment opportunities for all of their inhabitants, in order to retain the public’s confidence in democracy. There is a great deal to learn from the innovations in urban democratic governance being developed in these hubs of human energy. Both the innovations and energy should be harnessed to ensure that cities don’t fail their biggest test: making urban democracy work for women too.

Shari Bryan
Shari Bryan is NDI's vice president. She joined NDI in 1998 and served as senior associate and regional director of the Institute's democratic programs in Southern and East Africa from 2001 through...
Connect with the author
Twitter
LinkedIn
NDI