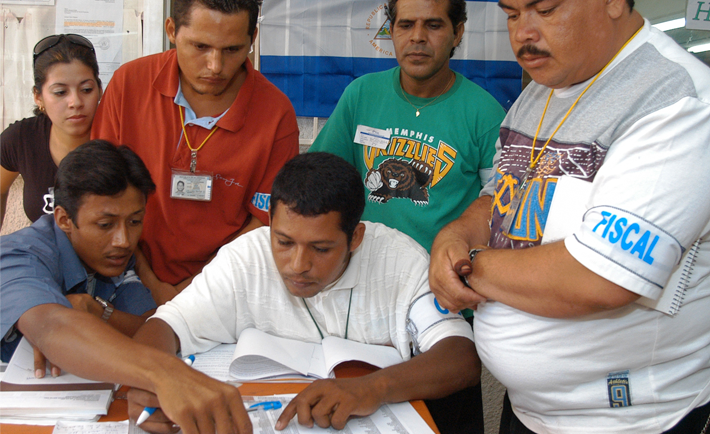 Advances and reversals generally mark the trajectory of democratic development. But in the political history of Nicaragua over the last decade, there have been only reversals with next year’s elections likely to see the continued erosion of Nicaraguan democracy and consolidation of power by President Daniel Ortega and his Sandinista National Liberation Front (Frente Sandinista de Liberación Nacional - FSLN).

But there are voices advocating for greater pluralism. Opposition political parties are small but vocal, and different elements of civil society have advocated for democratic reforms. While their efforts have not yet yielded results, the Nicaraguan government still has the opportunity to move toward greater transparency in the polls before next year's presidential elections.

Nicaragua's democracy began its backward slide with "the Pact" (Pacto), an agreement between former President Arnaldo Alemán of the Partido Liberal Constitucionalista (PLC) and Ortega. The Pacto dismantled the checks and balances between competing political parties that had kept the electoral system transparent since the 1990 election of Violeta Chamorro.

In the years that followed, the Pacto gained strength and the PLC fractured. The result was the concentration of power in the executive branch and under a single party, a process that accelerated with Ortega’s election as president in 2006.

Ortega’s reelection in 2011 was possible only because of a questionable interpretation of the term limits established in the Nicaraguan constitution. Ortega won with 63 percent of the vote in an election that was criticized in reports by the Organization of American States (OAS) and the European Union (EU). Ortega’s party won 68 percent of the seats in the National Assembly, enough to pass constitutional reforms without a single vote from another party.

In January 2014, the FSLN parliamentary group passed legislation that consolidated power in the office of the presidency and facilitated Ortega’s hold on power. Today, Ortega arguably dominates Nicaraguan politics more thoroughly than he did as coordinator of the FSLN junta or as president in the 1980s. According to the latest Gallup poll, he enjoys a 74 percent favorability rating. The shift toward the FSLN has been significant and observable among all demographics, but particularly among the young.

Several key civil society groups are advocating for greater political pluralism. The Catholic Church, a powerful institution that counted 58.5 percent of the population as members in the 2005 census, has been openly critical of the administration and has expressed concern about the state of democracy in Nicaragua. In the evangelical church, leadership has been divided with some staunch supporters of the government and others critical of the administration.

The private sector has entered into a close relationship with the government, which, unlike the Ortega government of the 1980s, has taken a business-friendly attitude. The Consejo Superior de la Empresa Privada (COSEP), an association of Nicaraguan trade groups, has become the most effective independent intermediary between the government and its critics. COSEP has continued a low-intensity campaign to express concern about the state of democracy in Nicaragua, calling for greater tolerance and transparency. In years past the COSEP has expressed public concern on issues of voter ID issuance and the immense privileges of key public servants, such as the Supreme Court and Electoral Council Magistrates.

In a recent case, Nicaraguan businessman Milton Arce mobilized the COSEP and others to speak out on issues of democracy and the rule of law. A seemingly politically motivated and arbitrary expropriation of Arce’s property in April of this year has come to exemplify the vulnerability of private enterprise to the whims of the current government.

Alongside voices from civil society, a few groups are advocating for political pluralism within the political sphere itself. Partido Liberal Independiente (PLI) and the PLC continue to be the only registered opposition parties to show any preference among the general public , though neither has made significant public moves toward creating an electoral coalition.

As the country moves into the election cycle, the government has good reason to be confident about President Ortega’s reelection prospects. However, the government has not acted on the vast majority of the recommendations from EU and OAS after the last presidential election.

Despite setbacks, there is still room for hope. The Nicaraguan government should heed the calls from the business sector, opposition parties and civil society to ensure a fair and transparent electoral process next year. Greater transparency and respect for international election norms would strengthen the legitimacy of the FSLN and provide a basis for better managing internal political disputes.