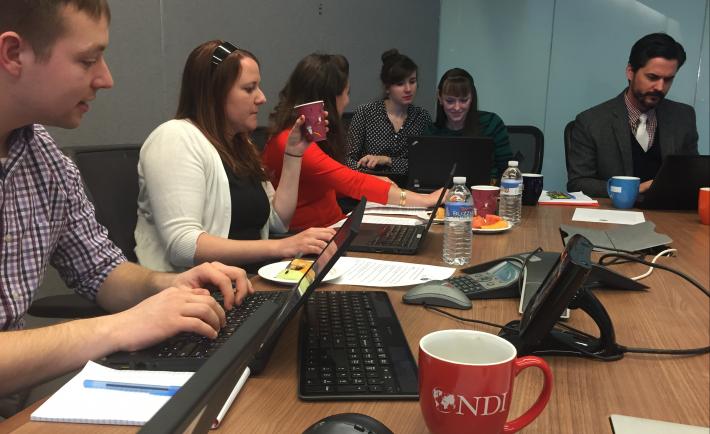 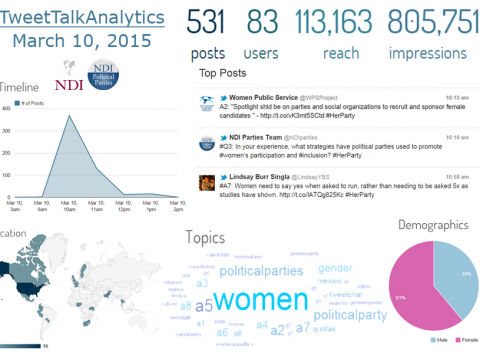 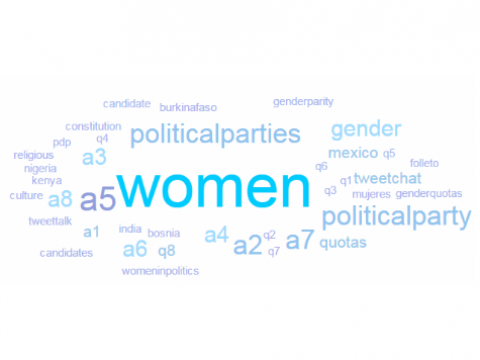 As part of the celebration of International Women’s Day 2015, NDI’s Political Parties and Gender, Women and Democracy teams held a crowdsourcing and networking event on Twitter called a “TweetTalk.” The purpose was to connect with political party members, gender equality advocates, academics and NDI staff from around the globe to discuss the important topic of women’s role in political parties. To help catalyze the discussion, the @NDIParties and @NDIWomen Twitter handles asked questions that pushed participants to share ideas, best practices and lessons learned when helping to engage more women in political parties.

Interesting ideas that were mentioned during the conversation included women working together at the local level in a multiparty setting to collectively raise their voice and parties setting aside funding specifically for women's campaigns. Participants also shared successful strategies to help engage women. For example, some parties in Uganda adopted gender quotas in their party constitutions to ensure compliance with the national quota law. Toward the end of the TweetTalk, Meg Munn, a member of the UK parliament, chimed in with an example from the Labour Party. She explained that the party introduced gender quotas for officers in local parties in hopes of engaging more women.

Through the TweetTalk, NDI was able to engage more than 80 unique Twitter users to contribute to the discussion using the hashtag #HerParty. While some tweeted only a single announcement to their followers, many users were fully engaged throughout the conversation. Participants seemed excited to share their experiences, and the discussion reached more than  100,000 Twitter users and made over 800,000 impressions. Reach is defined as the number of unique followers that all the participants of the TweetTalk had, while impressions takes into account the number of times a participant posts (number of followers multiplied by number of posts).

Although some have doubts about the utility of social media for productive, intellectual conversations, Twitter’s strength is its ability to bring people together across the globe. It serves as a terrific launching pad for further engagement with like-minded “tweeters.” This TweetTalk was an interesting and engaging way for NDI to spread the word about International Women’s Day, and highlight the importance of women in political parties and some of the challenges they face. That said, substantive conversations are challenging on Twitter. Due to the 140 character limit and the rapid speed at which Twitter tends to move, a deep analysis of ideas and concepts is difficult. Someone looking to have an in-depth online event should look to a different platform, one that allows for a more seamless exchange of high-level ideas and resources and can better engage participants. I hope to organize future TweetTalks, but plan to focus future events on gaining  attention for a rollout or release, crowdsourcing ideas or to reaching out to a specific network.