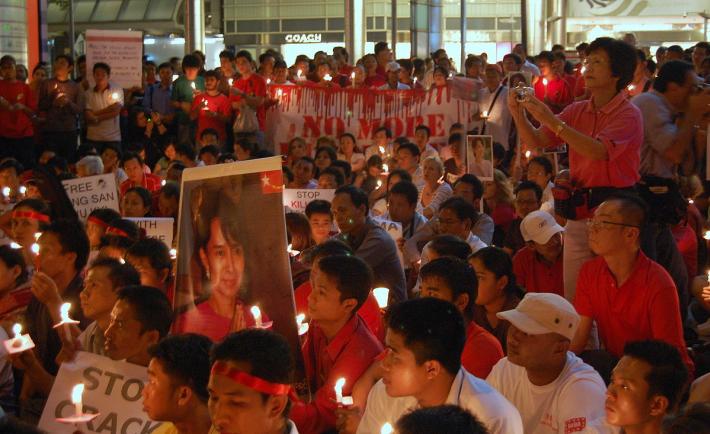 A Burmese anti-government protest in front of the Petronas Twin Towers. Photo credit: Off2riorob CC BY

In the four weeks between November 8 and December 6, 2015, the peoples of Myanmar (Burma), Burkina Faso and Venezuela delivered surprises: resounding defeats to military rule, strongman domination and populist authoritarianism. Aung San Suu Kyi’s National League for Democracy, suppressed for 25 years, won 77 percent of the elected seats for the national legislature – almost the identical mandate it won in 1990. In Burkina Faso, following a coup attempt just weeks earlier, voters in large numbers went defiantly to the polls a year after massive street demonstrations blocked the president from extending his tenure, driving him from his 27-year rule and warning the military not to take over. In Venezuela, where the deck was stacked heavily against the opposition, voters cleaned the legislative house – giving the opposition coalition a supermajority and breaking a 17-year string of ruling party victories.

These bright spots are the consequence of perseverance by democratic activists in the face of repression. They also highlight the importance of elections as a peaceful means for people to bring about change. In each case, autocratic rule corroded from within and popular demand strengthened. Geopolitics and global economic trends had varying, significant effects in all three countries. International factors included solidarity for citizens empowering themselves by freely expressing their will, while the drive for electoral change was distinctly homegrown.

Transitional phases are under way in each of these nations, though the outcome of the transition is not clear in any of them. In Burma and Venezuela the old regimes hold onto essential powers, and “power-sharing” is not part of their traditions. Burma’s military thus far indicates that it will respect the election result, but upcoming negotiations will determine the course of democratic reform. Venezuela faces the challenge of a broad coalition of parties taking seats in the legislature to address the country’s economic calamity. The incumbent president has denounced “cohabitation” with the opposition and is stacking the courts, while the outgoing National Assembly created a so-called communal parliament to assert “popular power” associated with the current ruling party. In Burkina Faso, the military has occupied or controlled government since 1966, and long-established patterns are hard to overcome. Yet, citizens in those countries are pressing for effective, representative government, and they deserve international help.

Democratic movements are taking place against currents of mass violence in Syria and Iraq, continued fighting in Afghanistan, violent extremism in numerous places and a global refugee crisis. Authoritarians are taking advantage of the times to strip away democratic space, while democratic countries are both countering terrorist threats and anti-democratic reactions to them.

Nonetheless, recent developments in Myanmar, Burka Faso and Venezuela are part of a broader stream flowing through 2015. That Indonesia, the world’s fourth most populist country and the largest Muslim nation, held December 9 gubernatorial and local elections – in which millions voted without notable incident – is an indication of global democratic currents. Nigeria’s 2015 elections marked a further consolidation for the world’s seventh and Africa’s most populous country (about 1 in every 40 people in the world live in Nigeria, according to the World Population Review).

Cote d’Ivoire continued to move forward by holding a peaceful presidential election, which was a landmark after former President Laurent Gbagbo refused to accept the 2010 election result, leading to over 3,000 deaths and Gbagbo being tried by the International Criminal Court. Ukrainians further demonstrated democratic resolve against occupation and aggression by conducting credible local elections across the country in areas where democratic voting is possible. The surprise presidential electoral upset in Sri Lanka, where the incumbent had grown increasingly autocratic, was followed by credible and relatively peaceful parliamentary elections. They too were remarkable events in a country racked by years of violence.

While polls were annulled without apparent reason on Zanzibar, and nondemocratic votes were held in places like Azerbaijan, Belarus, Egypt, Ethiopia and Sudan, elections held in more than 35 countries in 2015 were marked by the genuine expression of citizen will. This evidence of strong democratic norms demonstrates popular desire for democracy over autocracy, while recent developments in Venezuela, Burma and Burkina Faso make it clear that protracted efforts of citizens, sometimes at great personal cost, can prevail.

War and late-year tragedy can easily obscure positive developments, yet democratic advances in difficult countries are vital aspects of 2015. These examples provide inspiration in a problematic world and underscore the long-term importance of democratic solidarity and international assistance.