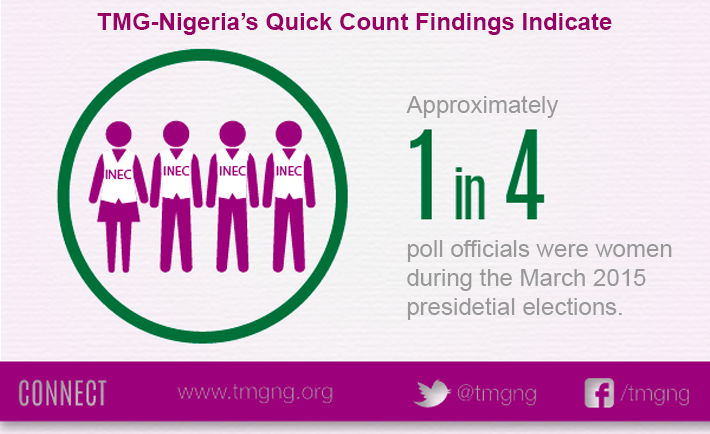 NDI’s domestic observation partner in Nigeria, TMG, reported that 1 in 4 election officials for the 2015 presidential and legislative elections were women.

There’s something new in the Gender, Women and Democracy (GWD) program at NDI. In evaluating existing programming within the democracy and governance community, the GWD team found a gap. As we examined the social, political, and economic barriers preventing women from participating fully in democratic governance, we found that one such barrier -- violence against women in elections (VAW-E) -- was absent from the conversation, largely because it had not been distinguished from wider studies of electoral violence. So, in partnership with NDI’s election team, and with funding from the National Endowment for Democracy, GWD is putting VAW-E on the map.

We’re defining VAW-E as any act of election violence -- threats, hate speech, assault, blackmail or assassination -- that is directed at someone because of her gender and that seeks to determine, delay or otherwise influence engagement in an electoral process. Around the world, women are targeted because of their aspirations to hold political office, their political activism, their jobs as electoral officials or simply their commitment to vote.

VAW-E can take many forms. An example familiar to many of us in the United States was the blatantly sexist and hostile response to Hillary Clinton’s presidential campaign in 2008, epitomized by men heckling her in New Hampshire with shouts of ‘Iron my shirt!’ and a popular Facebook group titled “Hillary Clinton: Stop Running for President and Make Me a Sandwich.” A more recent and particularly gruesome example is that of a woman mayoral candidate in Mexico who was decapitated just a couple of weeks after beginning her campaign.

VAW-E is not only directed at women seeking office, however: in Zimbabwe, for instance, violence is regularly aimed at women voters during elections to keep them from participating and exercising their democratic rights. Political actors are not the only perpetrators of VAW-E, either: a good deal of VAW-E goes unseen because it is perpetrated by family members, in women’s own homes.

So why is VAW-E significant as a separate issue from general electoral violence? For starters, VAW-E is yet another manifestation of efforts to prevent women from participating in public life. VAW-E is violence aimed at women during elections specifically because they are women, as opposed to the election violence that stems from differences in candidates’ or parties’ positions on issues. Additionally, in most of the world, women must already overcome numerous challenges to participate in elections in any capacity, from laws limiting women’s movements outside the home to patriarchal customs subordinating and restricting women from participating in public life. And finally, as one study by the International Foundation for Electoral Systems (IFES) indicated, women voters face violence at quadruple the rate of male voters during elections, giving a clear indication that electoral violence manifests itself differently for women than it does for men.

As long as most data on electoral violence remains gender-blind, it is impossible to properly address the problem and bridge the gap in political participation. This is why the GWD program is using and building on NDI’s expertise in domestic election observation in an innovative new program aimed at training election observers to look for and recognize VAW-E -- whether against women as voters, activists, candidates or officials -- so that it can be reduced. A new website will store and record the incidence of VAW-E prior to, during and after elections to raise awareness about its pervasiveness and the ways in which it prevents women from participating in public life.

Obstacles that prevent half the world’s population from full participation in the electoral process undermine the integrity of that process just as much as gerrymandering, ballot box stuffing or unequal access to the media. By drawing attention to gender-based electoral violence, and by empowering election observers and other key stakeholders to recognize, report and mitigate it, the GWD program is taking another step to eliminate barriers that reinforce gender inequality around the world.