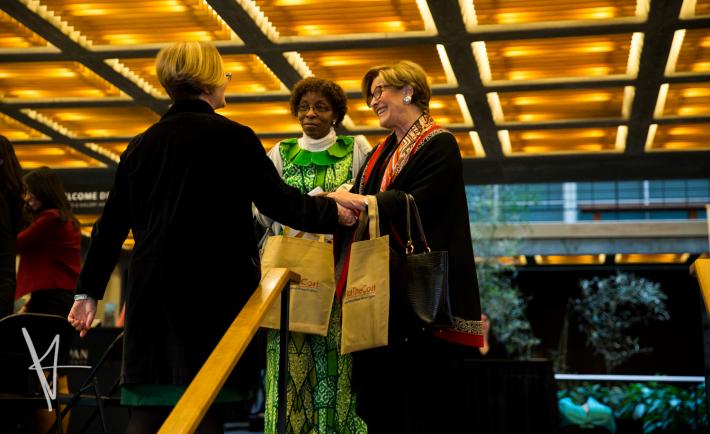 At 5:45 in the morning, there isn’t much that I think about apart from coffee. But at 5:45 AM on March 17th, 2016 in New York City, I -  along with NDI colleagues from the Gender, Women & Democracy (GWD), Operations,  Communications and Development teams - was getting ready to run lighting cues, set-up registration and prep our volunteers for the #NotTheCost launch event.  This was the kickoff to a campaign that resists the idea that violence is the cost of women’s political participation.  It had taken a year of work with international experts, including months of logistical planning, to design the program of testimonies and panels that launched our Call to Action to stop this violence. We had all been running full-tilt to ensure everything was prepared for the conference: from daily team meetings, to ordering bags, stickers and flash drives, to developing the substantive content of the Call to Action, to creating a detailed run of show worthy of any production just down the road on Broadway; it was almost too easy for us to forget what the #NotTheCost initiative stood for.

But then March 17th happened, and after all the planning, after all the last-minute arrangements -- including exciting additions to the program such as women’s activist and wife of the Canadian Prime Minister Madame Sophie Grégoire Trudeau -- I finally got to see this thing come to life. I watched people I’d only ever read about discuss this topic. I heard Madeleine Albright speak, and I listened as women representing countries as diverse as Kosovo, Cote D’Ivoire, Indonesia and Peru shared profoundly personal stories of violence they had experienced as women because they dared to be political activists, elected officials or candidates. I walked away from the event completely floored by what what I had just witnessed.

This “conference” was more than just a conference:  it was the starting point for a global movement. Hearing women speak about the violence they faced for exercising their democratic rights and hearing them voice their resolve to put an end to it so that younger, more vulnerable women are encouraged to get involved in politics put all our work into perspective. Even as we welcomed the participants to New York, one was forced to withdraw after threats to the security of their colleagues.  It made me realize just how big this initiative is, and how essential it is that we maintain the momentum of the campaign.  As Stephanie Linus, Nigerian actress, director and women’s advocate said, “We can stand here in New York and talk, or we can go out into the world and make a difference to the lives of women who want to be politically equal.”

From my privileged vantage point in the United States, the idea of political violence often seems distant, but it is the very real and lived experience of many women around the world.  The violence that they have experienced is so much more nuanced than the physical extremes of murder or rape. The countless and repetitive instances of psychological and verbal abuse, which go untold and are largely invisible are what make this problem so hard to solve. It has become normalized and systemic for women to face this abuse. It is a hurdle that women in politics have grown to expect and have been told to accept. It has become “the cost of being in politics” -- and that is fundamentally wrong.  All violence against women is wrong and must be stopped.  But violence that results in the exclusion or underrepresentation of women, or denies women the representative of their choice inherently undermines what democracy really stands for. That’s what we worked so hard to publicize through the conference. I needed this conference to shake me out of my comfort zone and remind me of the reality so many women face and fight to overcome, and that’s exactly what it did.

Afterwards, as I dealt with last-minute travel glitches, participants were thanking me for the opportunity to share their stories, for being part of the validation that the experiences they had endured were part of a global problem, and for the connections they forged with kindred spirits across the world. From them I learned that there is strength in solidarity, comfort in being believed and hope in the opportunities for action we presented in the Call to Action, and these are lessons I will never forget. One participant sent us an email on her return home which said everything I want to say: “Let's move forward more strongly towards freedom.”  I give a resounding “yes” to that, and towards making sure that violence is not the cost of politics -- for anyone.

Lauren Pires
Lauren Pires is a Project Assistant on the Gender, Women and Democracy Team at NDI.