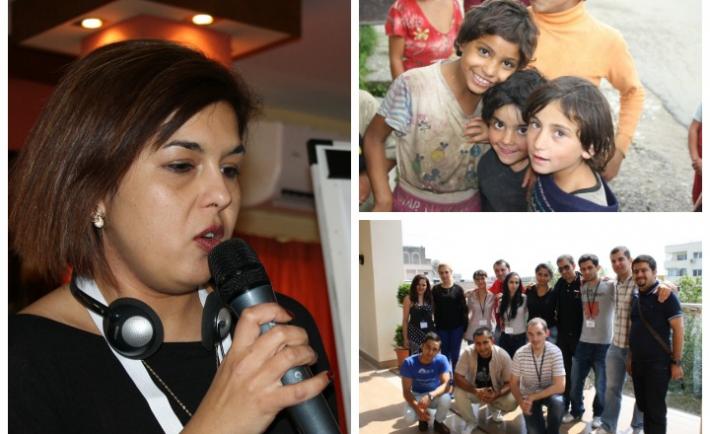 April 8 is a special day. It’s a day when more than 10 million Romani citizens worldwide celebrate their rich culture, traditions, and heritage. And this year, it marks exactly 45 years since the First World Romani Congress, which took place in Orpington, England. On April 8, 1971, 23 representatives of nine countries and numerous observers formed the International Roma Union - an organization to represent Roma policy and interests worldwide - and adopted an official Roma flag and the Roma anthem, Djelem, Djelem.

But who are the Roma?

Seven years ago, when I came to NDI to work on the Roma initiative in Central and Eastern Europe, I did not know the significance behind April 8. I had only learned the word “Roma”, as it pertains to the group that many often refer to as “Gyspies” or “Tsigane”. I did not know there was a Roma “nation” with its own language and symbols. I knew little about the modern-day persecution of Roma. My knowledge about this ethnic group was a skewed perspective formed by my Soviet childhood.

To me, Roma - цыгане - were a beautiful mystery. They were the enchanting dancers in fairy tales, the fortune tellers you saw at bazaars, the horse traders and the travellers. They were also cunning thieves, beggars, and pickpockets on the streets - a common misconception. On the other hand, they were also just people with a darker complexion. To us, the word “Tsigan” was not necessarily associated with bad things, particularly when it came to Romani music, which always was and still is very popular in Russian culture.

Thanks in part to my work at NDI over the past seven years, my understanding of Roma has changed. Now, when people ask me, “who are the Roma?”, I am glad I am able to give them a better answer.

Statistically, the Roma make up the largest ethnic minority in Europe, though Romani people reside throughout the world. There are multiple distinct ethnicities within the Roma population, based in part on territorial, cultural and dialectal differences, and self-designation, such as Ashkali (Kosovo), Gitano (Spain), Manouche (France), or Sinti (Austria, Germany, Italy, and Poland). The Roma do not subscribe to a single faith and Romani communities differ in terms of traditions. For most, however, family is the root of their lives and it is common for several generations of Roma to live together under one roof or in one village.

The one thing that is a unifier for this diverse group is the Romani language - Rromanës - with its many dialects. Another is the notion of a common heritage and the struggles Roma people have faced throughout the past 1,000 years. And for many European Roma, a uniting factor is the exclusion and marginalization they face in their communities.

In my seven years of working with Roma communities, I have seen European citizens living in segregation, without access to water, sewage, or electricity. I have encountered extreme poverty, malnutrition, and illiteracy. I have witnessed discrimination of Roma in public places. And I have seen Roma work hard to advocate for and defend the equal rights they are guaranteed as citizens and as human beings.

What has struck me the most is the incredible passion Roma have for life. I have seen this passion in working with Roma election candidates and volunteers, advocates, and grassroot organizers. I have felt it in informal conversations after a long day of work, as we shared stories about our lives, families, and culture. Some of my fondest memories from my many trips are actually these personal discussions in Roma settlements over coffee and palinka, feeling the warmth and the hospitality of our Romani hosts.

If you ask me “who are the Roma?”, I will simply say that they are people. After all, the word “Rom” in Romani means “man.”