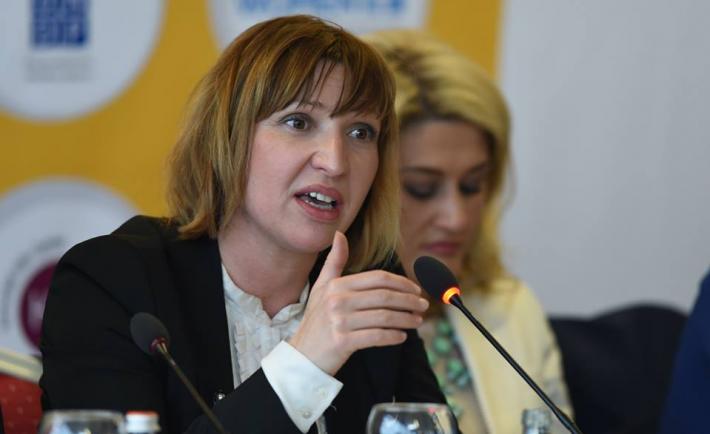 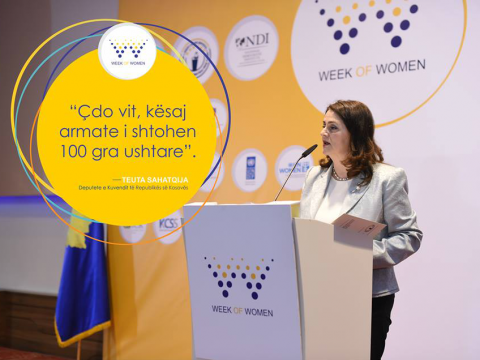 Speaking on the long-term impact of the event, Kosovo MP Teuta Sahatqija said, "Every year, this army gains 100 women soldiers."

More than 100 Kosovar women from all sectors of society traveled to Pristina last week for the fourth annual Week of Women (WoW). The weeklong event, supported by NDI, brings together Kosovar women to hone skills and techniques to help them become more effective leaders in their fields.

WoW has brought more than 100 women together from political parties, civil society, business, the media and academia every year since 2012. The attendees meet with representatives from government institutions, nongovernmental organizations (NGOs), and embassies to discuss challenges to women’s empowerment and brainstorm solutions. International and local experts on women’s political participation from academia, local and international NGOs, the Kosovo Parliament and foreign governments lead panel discussions on strategies and policies for women’s political and socioeconomic advancement. Experts also lead training sessions on leadership skills to help participants excel in their fields.

WoW has covered various political and professional leadership topics, from election campaigning to career planning and women in technology. This year, the event focused on rule of law, with particular emphasis on the role of women in fighting corruption, property rights and inheritance, and gender diversity in the security sector. Training covered a diverse set of leadership skills including public speaking, effective use of social media, goal-setting, power mapping and persuasion.

WoW participants represent different regional, ethnic, age, political party and professional groups, giving them the opportunity to build new relationships and networks for future collaboration on women’s empowerment. Previous WoW participants have appeared on television to speak about the importance of increasing women’s political participation, and founded cross-party women’s caucuses at the local level. NDI hopes that the skills and relationships participants gain at WoW will help them rise to both elected and appointed government positions and address rule of law issues.